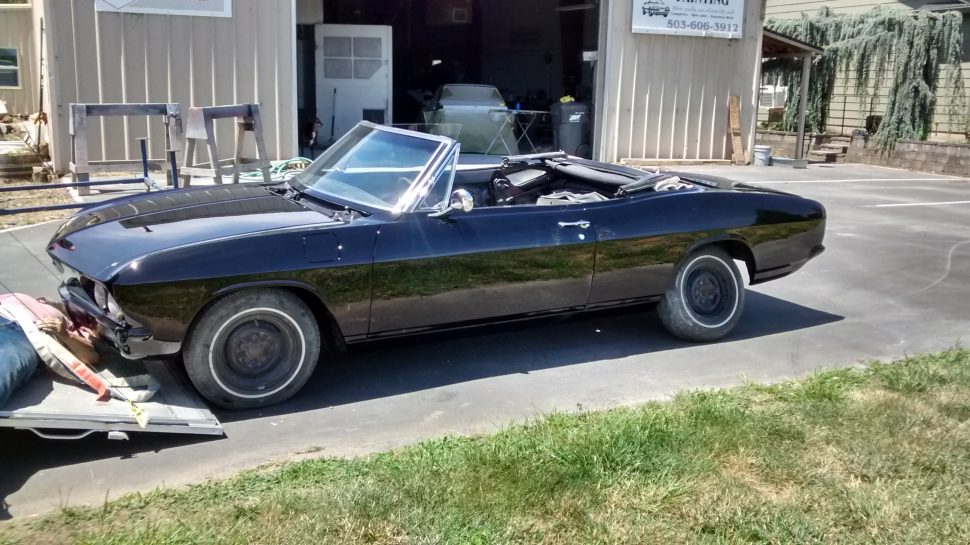 Editor’s note: Last August, we brought you the story of Hemmings Daily contributor, concours judge and former North Dakota State Senator Don Homuth’s improbable quest for, and later purchase of, the 1966 Chevrolet Corvair Corsa convertible he’d originally acquired in January of 1968, the night before his return to Vietnam. In Don’s own words, here is the latest status update on his Corvair restoration.

My 1966 Corvair Corsa convertible, fresh from the paint shop. The extreme rear camber is caused by the missing engine, and the car barely fit in the trailer. Photos by author.

It’s really interesting, the things you can learn when a good competent car body shop guy gets hold of a car. As purchased, the car would easily pass the thirty-foot test. Not so easily the ten-foot test, and wouldn’t pass the five-foot test at all. The paint slumps, the incomplete buffing, the obvious ill fit of several body panels had to be seen close up. 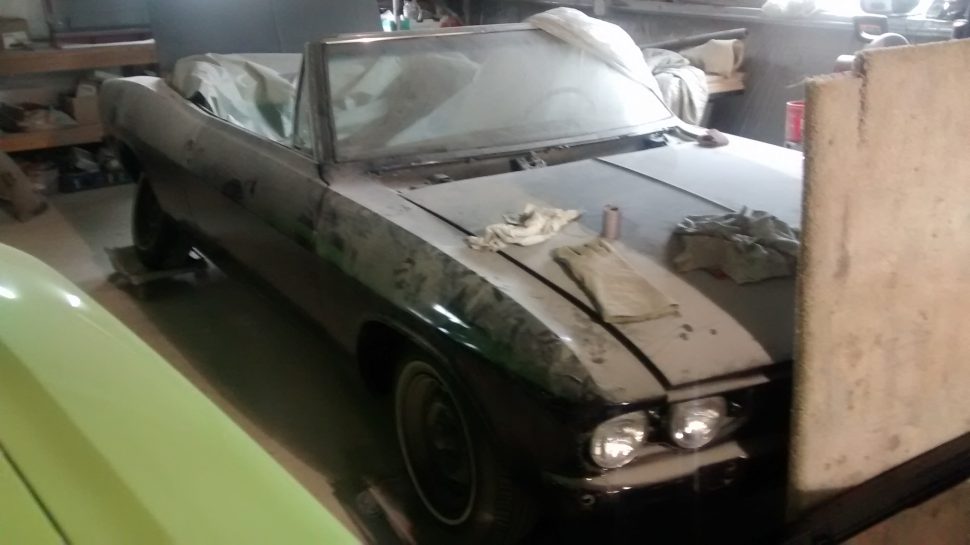 There were hints of other problems, but nothing definitive. Still, even the suspicions of some underlying problems were enough to cause some anxiety. For example:

There were a few more issues, and they were mostly insignificant. But there is so little difference between doing something right and putting in the effort required to hide things. I have a similar story on a bigger scale about a bizarre action taken with my 1959 Cadillac a few years back. That body shop filled some dents in the rear panel under the bumper with Bondo, then essentially glued a formed piece of sheet metal with the filler. No magnet could have found it.  Mine didn’t. Regardless; the Corvair now holds no more secrets or surprises.  Progress of a sort. 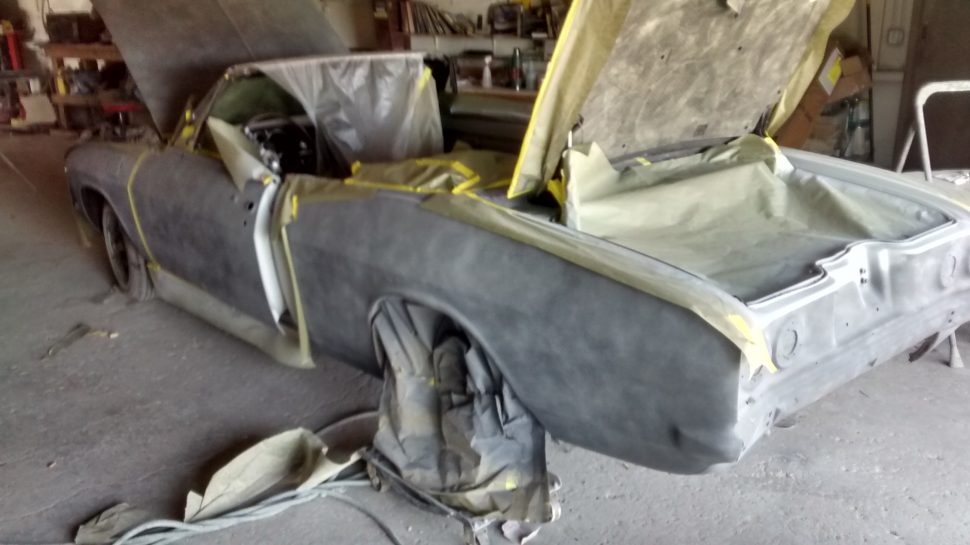 Mid-April:  Work underway, but looks pretty bad at the moment.  How can it ever be put right?

In all candor, I don’t hold the previous owner responsible and no criticism of his effort is implied here. The car is what it is.  All he really wanted to do was make it operable and be able to drive it around.  So the shortcuts to keep his effort and expense low make perfect sense.  Had he not responded to my internet query nearly two years ago, I’d never have known the car was still out there, and it wouldn’t have mattered.  I remain grateful to have had another crack at it.

The lesson here, once again, is caveat emptor. Which is always good advice, but difficult even in the best of circumstances. 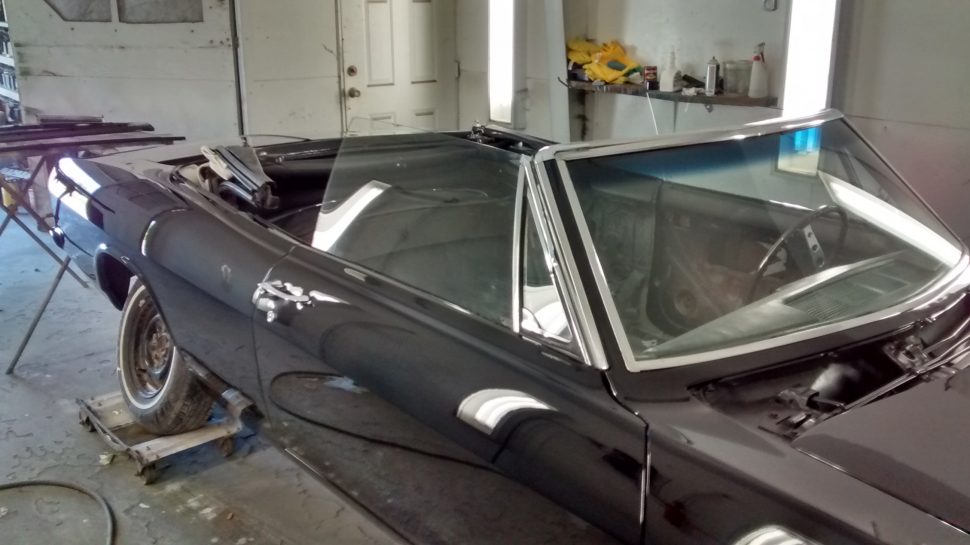 For me, had I known of the issues, I was going to buy that car regardless, for reasons earlier stated.  I wasn’t in the market for “a Corvair.” I was intent on buying that Corvair, or having none at all.  It is special to me.

Did I overpay?  Probably – the market for such things has them priced lower than I will eventually spend on this one – which is now about $20,000 and still climbing. Does it matter? Not really. I have it back and will spend the next several months working on it to put it back as I remember it from forty years ago. As I said in the last installment, I am revisiting a memory. Those are priceless.

(And my wife is OK with it, which is a marvelous miracle. I am grateful for that too.) 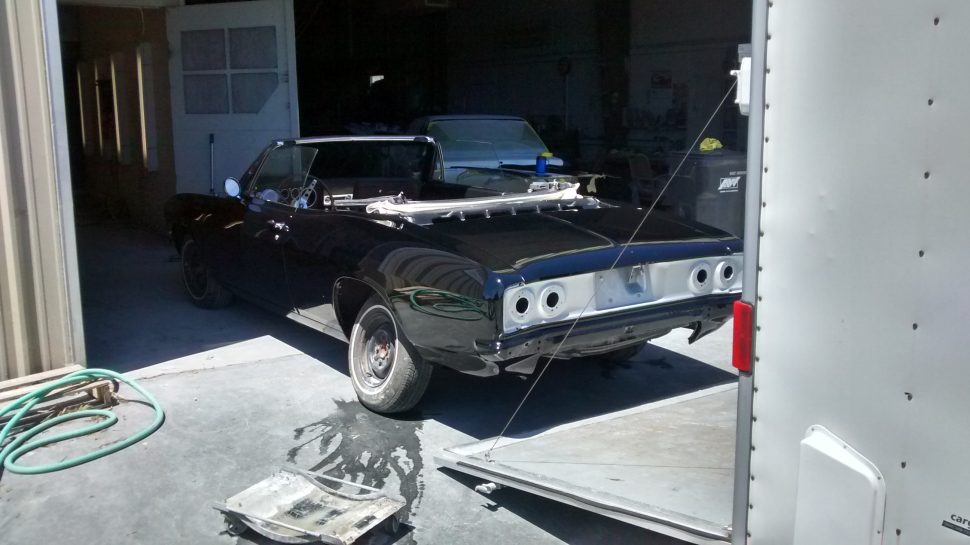 It wouldn’t go up the trailer ramp backwards.  Rear tire camber was too splayed.

There are a few other issues.

Once completely apart, it was clear that the metal underneath the dashboard and cowling has some surface rust from sitting out for twenty years in the weather. I’ve found some spray rust conversion materials that I will apply. No one will ever see them, but I would know. Reason enough.

I’ll be sending the Corsa dash and instruments to a guy in Pennsylvania to be reworked.

Paint does funny things. It fills holes that should be there, but can’t be found. I’ll have to take an old ice pick on my tool rack and poke around to find and reopen them. It packs up in corners so that panels don’t fit properly. That will have to be dug out and smoothed out and will take considerable effort and time.

The body/paint guy at the shop did a truly great job of dealing with most of the smallish issues. Where metal had to be formed, he formed it and welded it in properly. Where panels didn’t fit, he removed components and he and his father refitted them. He spent days on the blocking and sanding, then again on the buffing and polishing, some of it by hand.  I can find only one small spot where the buffing wasn’t quite complete, and he says he will stop by and put it right when he comes this way. 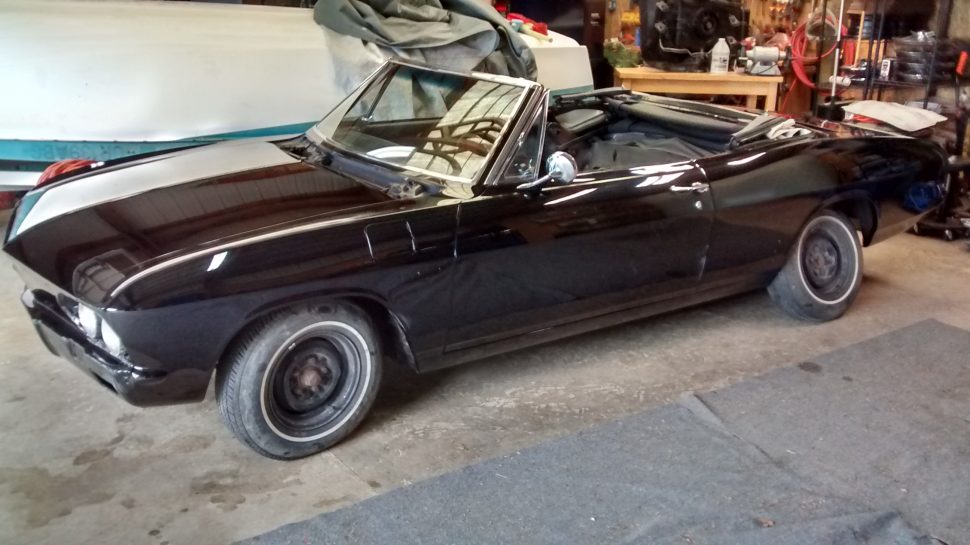 Home at last!  In my own shop.  Both summer projects — the boat and the car.

Getting it onto the borrowed enclosed trailer was a chore. There was maybe an inch on either side. But it made it back in good shape.  Getting it off the trailer was a bigger chore, since with the motor and transmission removed, the Independent Rear Suspension allowed the wheels to splay outward at the bottom, so steering was problematic coming down the ramp. But what two guys could put on, three could take off.

Some backing and forthing in the shop has it spotted appropriately in the middle, with room for the boat project on one side and the place where I park the Black Pearl on the other. Got it up on jackstands so I won’t have to bend over as far. Have laid in a large supply of soft rags with which to handle the newly painted surfaces. I’ll have to get a generic breathable car cover to allow the paint to continue to cure during the hot weather to come.

But that paint job is a genuine work of art. I ran my bare hands over all of it, and couldn’t find even one single dust speck or flaw in the surface. Looks a little like cast glass – same as the Black Pearl. 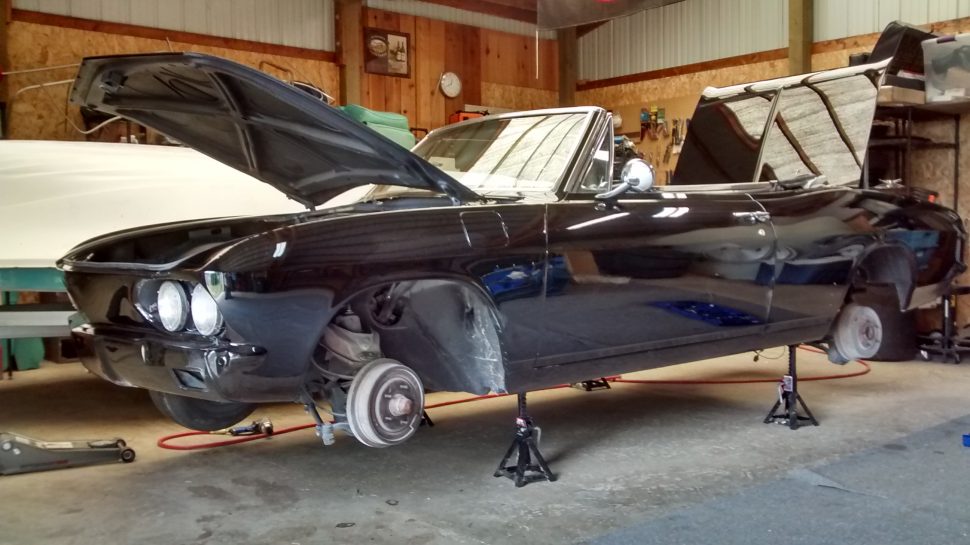 Up on jack stands.  It will be here till at least fall (if I’m lucky and everything goes well — which it predictably won’).  But by next spring, it ought to be ready.

I’ll go forward simultaneously now on a couple of fronts. A lot of the trim should be easy enough to replace. I’ll probably start with that just to reduce the volume of bits and pieces in various plastic boxes. This is where labeling each fastener that came off and putting them into plastic bags to identify which component they go with is going to pay off with much time saved.

The four-carb motor is on the workbench, and the four rebuilt correct carburetors came today. The linkage is en route and should be here next week. I’m going to enlist the services of Jeff Chapman again to reassemble the drive train. If this is to be done, best to have it done by a genuine expert, and he is. I’ll probably have to fly him up here, but doing that will save several months of bother, and I will be reasonably assured of a positive outcome.

A list of needed parts and materials is now in the hands of Clark’s Corvair Parts.

So – the shell is done and ready for assembly.