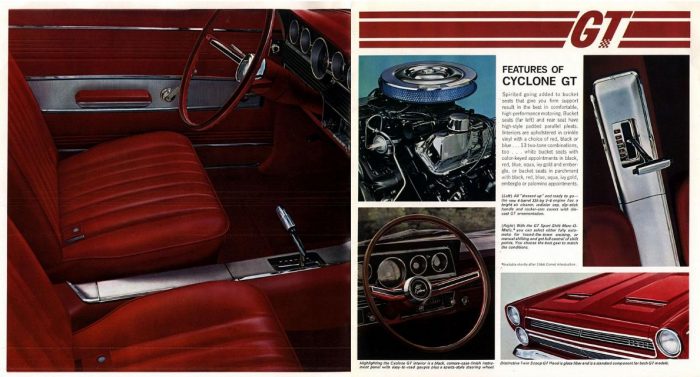 Most of us wouldn’t likely equate the Comet Cyclone GT with Russian spies, but it appears that Mercury wanted viewers of this film to believe that the updates to this car line for 1966 were so important the Soviet Union of the Cold War era would dispatch spies to steal the details of them.

This tongue-in-cheek production depicts a male and female spy breaking into what appears to be a mockup of a Mercury showroom to get a peek at two of the latest Comet models—the 202 and the Cyclone GT—prior to their introduction. They regale us with descriptions of each individual body change for 1966 and even provide measurements to compare them to the 1965 models. Then they take the bright red GT for a test drive.

A ’65 Comet, replete with optional dash-mounted tach pulls up next to them at a stop sign and the young driver and passenger ask about the features of the ’66, using lots of mid-1960s slang terms. “Hey baby, you laid a patch back there.” “You were wailin’ Daddy, really wailin’.” “Hey Daddy, how many horses are you whippin’?” We soon learn from the female spy of the 1966 Comet’s V-8 engine offerings and power output.

Then they stage what may be the lowest speed street race ever recorded on film. Note how slow the background and the white lines on the roadway go by while they are racing. Our Russian spies are finally pulled over and captured by the police and an FBI agent, but wait, there’s a twist ending. You’ll have to watch the video to find out what it is.

Though a bit corny in its execution, for any fan of the Cyclone GT, this film is a must see, as it features one when it was brand new and shows it driving out on the open road with its 335-hp 390-cu.in. engine under the twin-scooped GT hood, backed by an optional Sport Shift Merc-O-Matic transmission. The GT also featured an engine dress-up kit; dual exhaust; heavy-duty suspension; 14 x 5.5 wheels with 7.75 x 14 tires; console and side stripes. Thanks to 1mercurycometfan for posting this entertaining just-over-7-minute film on YouTube.