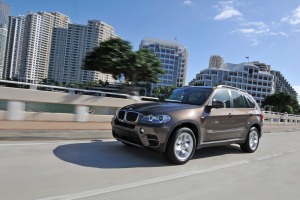 2011 BMW X5 And X6 Recalled Because Of Powertrain Problem

The vehicles included in the recall are:

WASHINGTON — BMW of North America is recalling 21,493 2011 BMW X5 and BMW X6 crossover SUVs because of a powertrain problem, according to the National Highway Traffic Safety Administration.

“The affected vehicles have a front driveshaft universal joint that may not seal out water and debris from getting in and damaging the joint, which could lead to its failure,” NHTSA said in its recall summary. “If the front universal joint fails, the front wheels would not be driven, affecting vehicle traction.

“Additionally, the continued driving of the vehicle with a broken front universal joint may damage other components. Either condition may increase the risk of a crash.”

There are no injuries or fatalities linked to the recall, BMW told federal safety regulators.

Drivers will be alerted to the problem by noise from the area of the front drivetrain, the company said. Over time, this noise will increase, along with vibration.

BMW dealers will replace the front driveshaft. The recall is expected to begin on July 1. Owners can contact BMW customer service at 1-800-525-7417.

Edmunds says: Owners of these vehicles should wait for their official recall notice and then schedule a service appointment with their dealer. But if you have an immediate concern, it’s best to contact your dealer now.