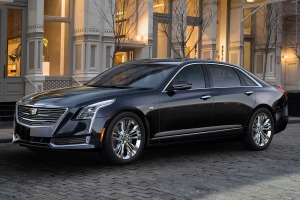 Cadillac’s flagship CT6, on sale now at Cadillac dealerships, competes in the luxury market against such models as the Audi A8, BMW 5 Series, Mercedes-Benz S-Class and the Porsche Panamera.

The rear-seat multimedia system is standard on the CT6 Platinum trim level and available as part of the Rear Seat package, a $2,450 option, on the CT6 Luxury and Premium Luxury models.

It includes HDMI and USB ports that can be used with the vehicle’s Wi-Fi hotspot to stream Internet content through various devices, such as Google Chromecast, Amazon Fire TV Stick or Apple TV, to two independent 10-inch HD video screens that pop up from the back of the front seats.

The ports can also be used to connect personal devices and play stored media or Blu-Ray DVDs through the system.

And the CT6 doesn’t neglect front-seat passengers. They can use the 10.2-inch CUE (Cadillac User Experience) screen to display media from USBs or Blu-Ray discs, but only when the vehicle is in Park.

The surround-vision video recording system comes standard on the 2016 Cadillac CT6 Luxury, Premium Luxury and Platinum trim levels and is not available on other models.

It makes use of seven exterior cameras — four of which are unobtrusively mounted around the front, sides and rear of the vehicle — to provide recorded video of the CT6’s surroundings. The remaining three cameras are used for the Rear Camera Mirror, Lane Keep Assist system and the Night Vision system.

When activated, the system records with the front and rear cameras while the car is in operation and uses four of the cameras in round-robin sequence when the vehicle’s security system is armed.

The cameras also display a 360-degree view around the vehicle on the CUE screen to assist the driver with parking and other maneuvers.

Cadillac says owners might use the video system to record a scenic drive, to capture an attempt to tamper with the CT6 or to record a traffic incident.

Footage is recorded on an SD card in the trunk, allowing owners to view it, save it on the card or download it to a personal computer.

Edmunds says: Cadillac has loaded the 2016 CT6 with the kind of technology features that will help it compete in the high-end luxury market segment.