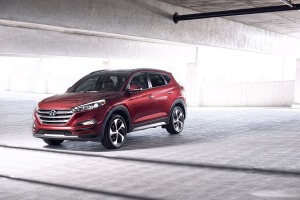 “In the affected vehicles, if the primary hood latch has been released and the vehicle is driven, the secondary hood latch may not adequately secure the hood to prevent it from opening while the vehicle is in motion,” NHTSA said in its recall summary. “The hood may unexpectedly open while driving, increasing the risk of a crash.”

WASHINGTON — Hyundai Motor America is recalling 81,000 2016 Hyundai Tucson SUVs because of a hood latch problem, according to the National Highway Traffic Safety Administration.

There are no injuries, accidents or fatalities linked to the recall, Hyundai spokesman Jim Trainor told Edmunds.

Hyundai dealers will replace the secondary hood latch. The recall is expected to begin on July 15. Owners can contact Hyundai customer service at 1-855-371-9460.

Edmunds says: Owners of these vehicles should wait for their official recall notice and then schedule a service appointment with their dealer. But if you have an immediate concern, it’s best to contact your dealer now.