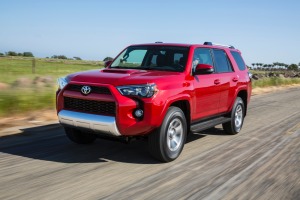 Toyota and Lexus dealers are being told to disclose the information at the time of sale.

Other affected vehicles that may be in dealer inventory and subject to future Takata recalls include the 2015 Lexus IS 250 C and 350 C convertibles, the Scion xB wagon and the 2015 Toyota 4Runner and Lexus GX 460, the automaker said.

The front-passenger airbag inflators supplied by Takata “are not subject to a current recall,” Toyota said in a statement.

The defective Takata airbags can explode with too much force, shooting metal shrapnel at vehicle occupants.

In May, Takata agreed to declare as defective another 35 million to 40 million inflators in U.S. vehicles by 2019. The inflators lack a critical drying agent, according to the National Highway Traffic Safety Administration.

“NHTSA and Takata are prioritizing recalls of these components based on when affected inflators are likely to pose an unreasonable risk to safety, considering time, temperature and environmental moisture, which depends on a vehicle’s operating location,” Toyota said.

Edmunds says: Car shoppers considering these vehicles now know they will be subject to a future Takata recall, important information that should be factored into the equation.