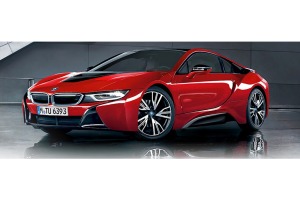 Pricing is unchanged from the 2016 model.

WOODCLIFF LAKE, New Jersey — The 2017 BMW i8 is priced at $141,695, including a $995 destination charge, BMW announced. The plug-in hybrid coupe arrives soon at BMW dealerships.

The major change for the new model year is the addition of the BMW i8 Protonic Red Edition, an appearance package that adds a bright red color choice to the lineup.

The cabin is equipped with NESO seats with red highlights, gray seatbelts and embossed headrests.

Floor mats with black leather and red stitching round out the package.

Key competitors to the BMW i8 include the Porsche Panamera S E-Hybrid and the Tesla Model S.