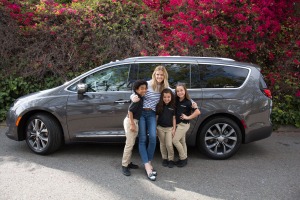 On sale now at Chrysler dealers, the 2017 Pacifica competes against such models as the Honda Odyssey, Kia Sedona, Nissan Quest and Toyota Sienna.

The first video in the campaign stars model and actress Brooklyn Decker, who drives the Pacifica as the young product specialists — Izzy (age 10), Miles (age 11) and Harper (age 8) — show how much they know about the minivan’s features, especially the available technology.

“Let’s not kid ourselves — we all know that when it comes to innovation and adapting to new technology, children hold a sizable advantage over adults,” said Tim Kuniskis, head of Dodge, SRT, Chrysler and Fiat passenger car brands, in a statement. “Our new digital and social campaign introducing the PacifiKids playfully acknowledges this fact.”

In addition to the digital campaign, the PacifiKids will be making appearances at a variety of family-oriented events throughout the summer explaining why the Chrysler Pacifica is, as Kuniskis said, “the perfect automotive tool for the family.”

Edmunds says: When it comes to promoting a product, you can’t go wrong with precocious children, and the PacifiKids certainly rank high on the cuteness scale.