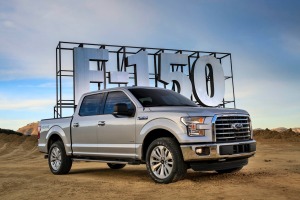 Ford calls it a “launch countdown,” although the direction in which the sequence actually goes depends on whether the truck is speeding up or slowing down.

DEARBORN, Michigan — The 2017 Ford F-150 pickup wants to be sure drivers know it’s equipped with the new 10-speed automatic transmission, so the tachometer display includes numbers that light up as it accelerates through the gears.

The new F-150 will begin arriving at Ford dealers this fall, competing against such models as the Chevrolet Silverado, Nissan Titan, Ram 1500 and Toyota Tundra.

To help keep customers entertained — and make sure they know what gear they’re in — Ford has arranged the indicator numbers vertically along the right side of the tachometer where the driver can’t miss them.

It’s not exactly a new concept for the Dearborn automaker.

The six-speed automatic transmission has a similar gear-indicator display in the tachometer. But that only goes up to six.