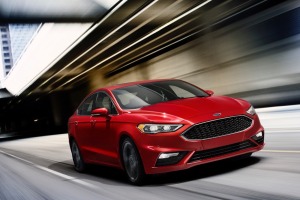 The Institute credited “a modified front-end structure and a new optional automatic-braking system” for improvements in the Fusion’s performance.

“The beefed-up front end improved the Fusion’s performance in the small overlap front test from acceptable to good,” the Institute said in a statement on Tuesday.

The test is designed to replicate what happens when the front corner of a vehicle collides with another vehicle or an object like a tree or utility pole.

The 2017 Fusion earned “good” ratings in the Institute’s other crash tests.

The National Highway Traffic Safety Administration has not rated the 2017 Fusion.

Key Fusion rivals include the Honda Accord, Kia Optima, Mazda 6 and Toyota Camry.

Edmunds says: Car shoppers keeping score should note that the Insurance Institute for Highway Safety has not rated the 2017 Honda Accord, Kia Optima, Mazda 6 or Toyota Camry.