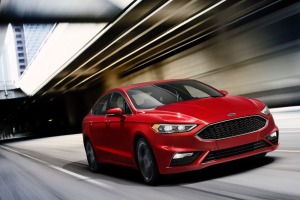 DEARBORN, Michigan — The 2017 Ford Fusion V6 Sport, a new addition to the midsize sedan’s lineup, will arrive at Ford dealerships later this summer.

Standard on the Sport, and available on a Fusion for the first time, is Ford’s 2.7-liter twin-turbo EcoBoost V6 engine.

When Ford announced the Fusion V6 Sport in January, it said the car would deliver 350 pound-feet of torque. That number was revised to 380, the automaker said on Thursday.

“Ford has its eyes not only on owners of V6-equipped Toyota Camrys and Honda Accords, but some other distinguished German models that command a five-figure premium over the 2017 Fusion Sport,” Ford said in a statement.

The Fusion V6 Sport starts at $34,350, including an $875 destination charge. Pricing was announced in January.

The latest member of the Fusion family is targeting the BMW 535i, Audi A6 3.0T and Mercedes-Benz E400, the automaker said.

Edmunds says: The Ford Fusion V6 Sport should appeal to value-minded car shoppers who are also interested in a performance edge.