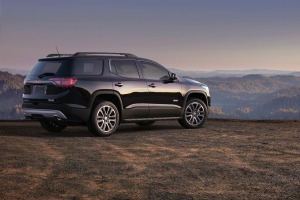 The feature is a major leap forward, since a child dies from heatstroke about once every 10 days in the U.S. from being left alone in a hot vehicle, according to the National Highway Traffic Safety Administration.

DETROIT — The 2017 GMC Acadia midsize SUV features an industry-first “Rear Seat Reminder” designed to prevent the driver from inadvertently leaving children and pets in a vehicle during hot weather.

“In fact, heatstroke is the leading cause of non-vehicle crash fatality for kids 14 and younger,” NHTSA said.

Twenty-four children died as a result of vehicular heatstroke in 2015, according to a report from the Department of Meteorology and Climate Science at San Jose State University.

The GM-patented feature reminds drivers to check the backseat as they leave the vehicle by sounding an alarm and displaying a message in the driver-information center that reads, “Rear Seat Reminder/Look in Rear Seat.”

“With this new feature, we are leading the charge to address this ongoing problem,” said Tricia Morrow, GM global safety strategy engineer, in a statement on Monday.

Edmunds says: This new technology in the 2017 Acadia can help parents and caregivers to prevent a tragedy.