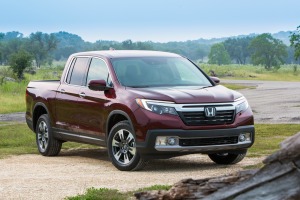 “We’ve been watching the online coverage regarding the pickup truck “rock drop” and thought it would be fun if we joined the conversation, too,” wrote Honda spokesman James Jenkins in an e-mailed message to Edmunds.

The Honda video shows about 830 pounds of landscaping blocks being dropped by a front loader into the standard composite bed of the Ridgeline.

“Is the Ridgeline bed tough?” asks the accompanying text. “You be the judge.”

An announcer notes: “There’s virtually no damage to the bed.”

As of Monday morning, the Honda video had about 50,000 views. The Ridgeline is on sale now at Honda dealerships.

Automotive News called the Silverado and F-150 truck bed face-off “the marketing equivalent of a cluster bomb, the most scathing and provocative automotive ads in years.”

Chevrolet recruited real people to watch as front loaders dumped 825 pounds of landscaping stones into the truck beds. Demonstrations were done without bedliners.

The test claimed the Silverado’s steel bed is more durable than the F-150’s stamped aluminum bed.

But Ford dismissed the test as a “marketing stunt.”

The three trucks also compete against the Ram 1500 and Nissan Titan.

Edmunds says: Will other truck makers pile on in this truck-bed brouhaha?