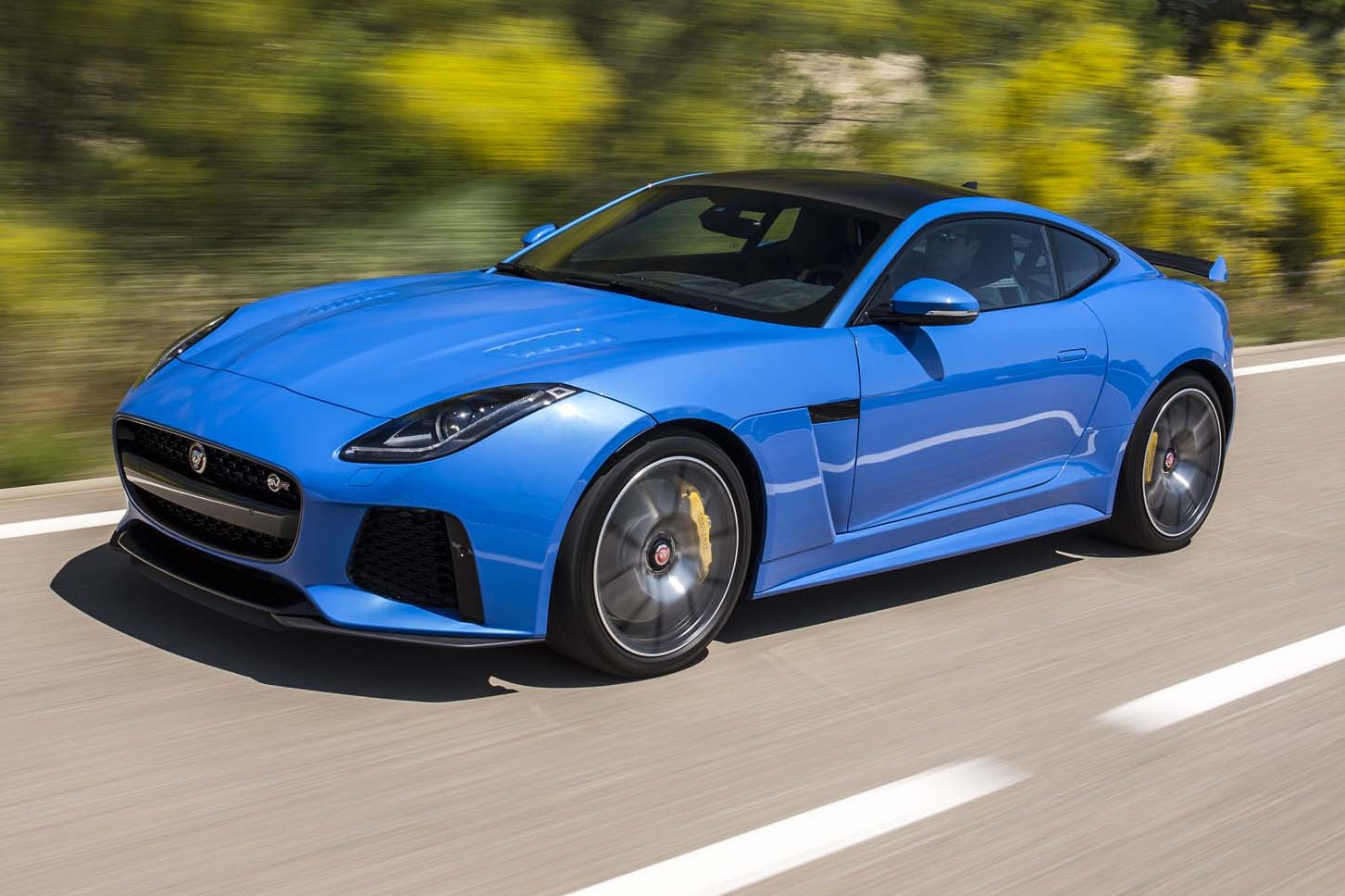 One thing this Jaguar did not need was more power. A “bloody” handful when it was introduced with 550 horsepower and rear-wheel drive, the 2016 F-Type R later benefited from all-wheel drive, and the tail-happy coupe and convertible gained civility and drivability and even a smidge too much understeer. It was clear, however, that Jaguar was inching closer to a world-class sports car with the F-Type R. Still, we had a couple nits to pick, none for want of power: a soft brake pedal that produced bothersome squirm under extreme braking and that mild yet stubborn tendency to scrub its speed with the front tires around corners. With the 2017 F-Type SVR, they’ve upped the output to 575 hp, which is never a bad thing. However, Jaguar has come several steps closer to an outright track-day car that can be driven every day.

Developed by Jaguar Land Rover Special Vehicle Operations, the F-Type SVR is a direct offshoot of the gorgeous rear-drive, limited-production $165,000 Project 7 tire-roaster. With the same supercharged, 5.0-liter V-8 and eight-speed automatic, the SVR makes better use of both with all-wheel drive. And compared to the R model, the SVR also drops weight (55 to 110 pounds depending on equipment) and benefits from more rubber, a real aero package, and heavily revised suspension. Unique SVR tuning extends to the transmission, steering, and the torque-vectoring-by-brake, dynamic stability control, and all-wheel-drive systems. Jaguar tossed us the keys to a convertible for a 90-mile twisting drive through the hills in northeastern Spain to the 3.3-mile Hermann Tilke-designed Motorland Aragón racing circuit, where we probed the absolute limits of a coupe, followed by another, even twistier 110-mile drive back. 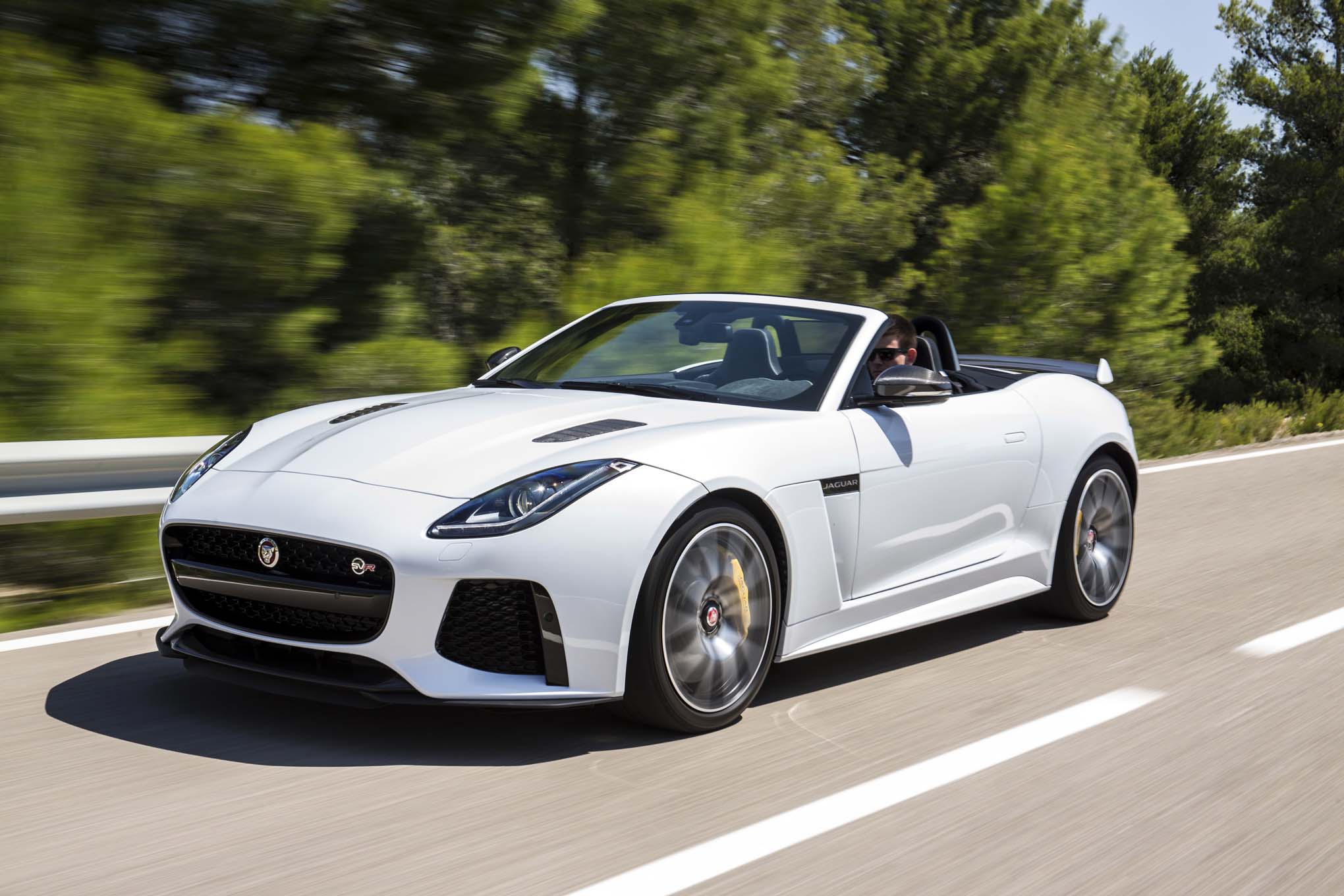 Out on the road and especially with the top lowered, the F-Type SVR is even louder, brassier-sounding than the R thanks to a new titanium/Inconel alloy dual exhaust system (otherwise stainless), which now takes twin paths (rather than the R’s single muffler) around the new rear diffuser, reduces backpressure, and sees its walls’ thickness halved to just 0.6mm, saving 35 pounds in the process. And you thought the R would peel paint with its staccato wail. Immediately, we sense the improvements to the car’s suspension. An entirely new cast-aluminum rear suspension carrier increases camber stiffness by 37 percent and toe deflection by 41 percent. Those are huge amounts, suggesting the previous car was a bit of a gooey mess back there, and the front anti-roll bar has been softened while the rear has been stiffened. All this would seem to indicate that the Special Vehicles team intended to banish understeer from the continent. They did. Combined with the revised electric-assist steering, the F-Type SVR is now extremely pointy; perhaps too pointy when the steering is kept in Dynamic or Track modes when a mid-corner bump can translate an errant arm wobble into an unintended change in direction. Luckily, there’s a touchscreen menu similar to those found in AMG- and M-badged cars. It allows tailoring the driveline, steering, and suspension response. We dialed the steering back to normal and left all else in max-attack mode, and the car was near perfect for a blast through the hills. (Bonus points earned for the car retaining the last selected configuration so the multimenu hunt needs to be done only once.) Our previous experience with an R informed us where it would’ve been pushing into and through low-speed hairpins and corners, but the SVR was having none of it. Sure, the bespoke Pirelli P Zero tires are now wider (265/35ZR20 and 305/30ZR20), and the forged aluminum wheels are lighter (by 7-8 pounds per corner), but there’s more to it than that. The crispness and confidence a driver has compressing straights and tossing the Jaguar into corners within inches of a guard rail reminds us very much of another favorite sports car, the Mercedes-AMG GT. Absent magnetorheological fluid, the shocks have that predictable one-and-done personality. Even the rates in the revised continuously variable dampers feel eerily similar to those of the AMG GT S. Might it have been a dynamic bogey?

Once on track in an SVR coupe, the similarities (and differences) compared to the AMG grew clearer still. The sound, first of all, while unmistakably V-8, is unique to the Jaguar. Unlike the guttural AMG, the F-Type SVR’s thin-walled exhaust is the thing that lends its distinctive brass-trumpet accent to the V-8 rumble. Acceleration down the first straight was beyond urgent. As before, the horsepower rating feels underrated, and Jaguar’s estimate of 3.5 seconds to 60 mph is clearly conservative—the last R we tested made the same trip in just 3.3 seconds. We’re guessing 3.1 or better for this car, especially because there’s more torque (516 lb-ft versus 502 lb-ft), more rubber, less weight, and, we’re told, a more sophisticated launch control. Shift speed from the ZF eight-speed Quickshift automatic approaches that of an AMG Speedshift MCT seven-speed automatic, but not quite as smooth as a dual-clutch automated manual in the AMG GT S. Given enough real estate, Jaguar certifies that this car will continue accelerating to a solid 200 mph. The 1-mile straight at Aragón only let us see 174 mph before clamping the optional six- and four-piston carbon-ceramic brakes (15.6 and 15.0 inches). Aero stability, even at 87 percent of its top speed, is unflappable. The aerodynamic package consists of a wider front bumper and more aggressive splitter, fender vents to release high-pressure at the front, a flat underfloor leading to a rear diffuser/venturi, and a carbon-fiber active rear wing out back that reduces lift and drag. Our 174 felt like 74 mph in any other car. Depending on the position of the moveable rear wing, reduction in the drag and lift coefficients fall between 2.5-7.5 percent (drag) and 15-45 percent (lift). In the dead-straight and flat braking zone at the end of what could be used as an airport runway, the F-Type SVR was steady and straight. However, in nearly every other braking exercise on the undulating track, where surface camber and trail braking come into play, the combination of the soft front/firm rear did have the car squirming on its nose under braking, not in a threatening way but noticeably nonetheless. 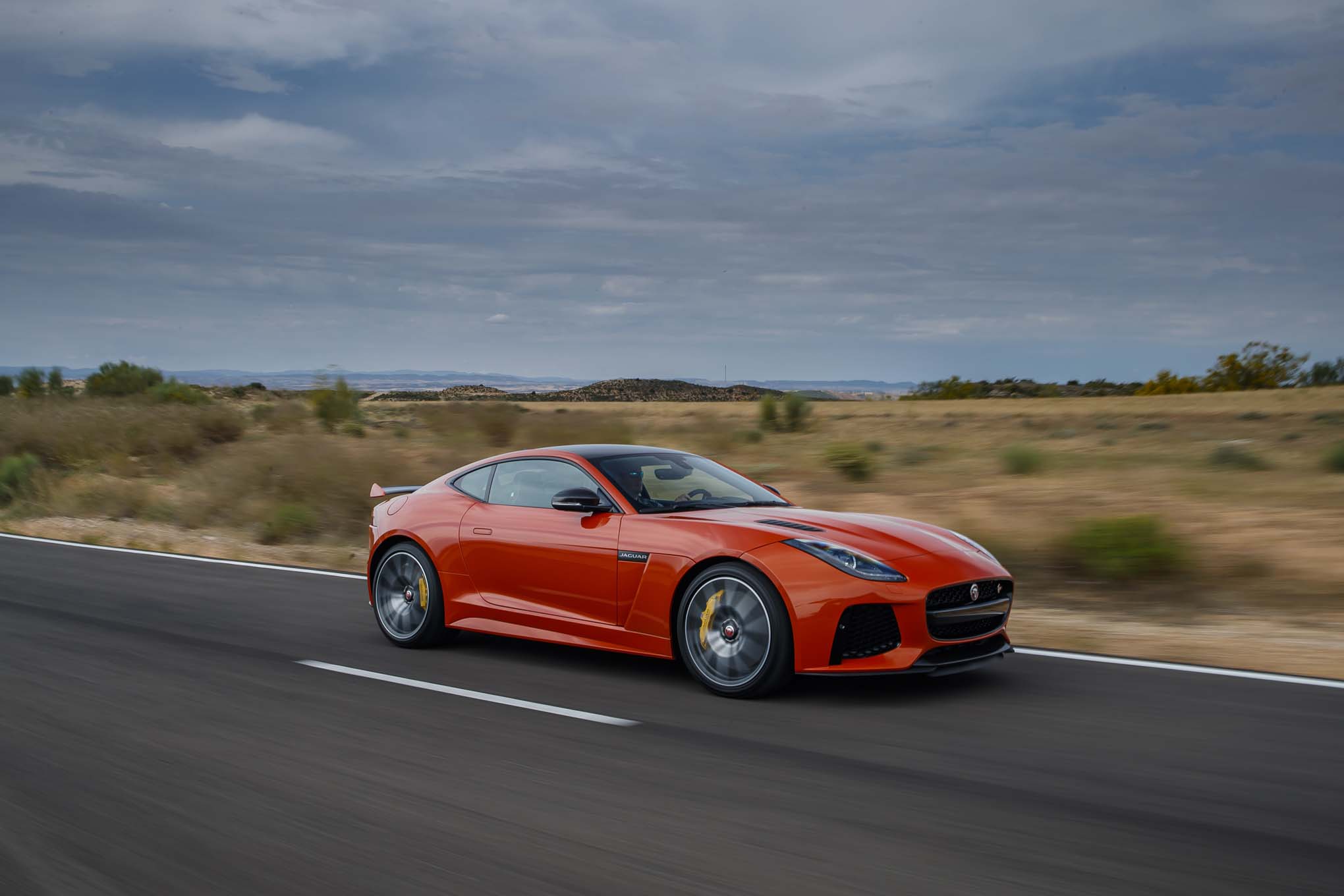 Yet those same suspension tweaks do otherwise add up to a more rear-wheel-drive experience despite being an AWD car. Yes, it will drift. No, it doesn’t push. There’s no doubt the AWD system allowed us to literally whack the throttle to the floor with the impunity of diplomatic immunity as we exited corners both slow and fast. Bang! And it goes and lets everybody within a one-mile radius know you’re at full throttle. As for the using the brakes to push the engine’s output through the differential to the correct outside rear tire (of which McLaren is the undisputed master), there were fast corners where maintenance throttle was required when we detected a bit of electronic guesswork happening that didn’t make the torque vectoring altogether seamless. And those who drove the car gratuitously sideways with stability and traction controls disabled for photos and video reported the center differential giving up at some point and the car defaulting to rear-drive. Hardly using the product as it was intended, it’s nevertheless worth noting. 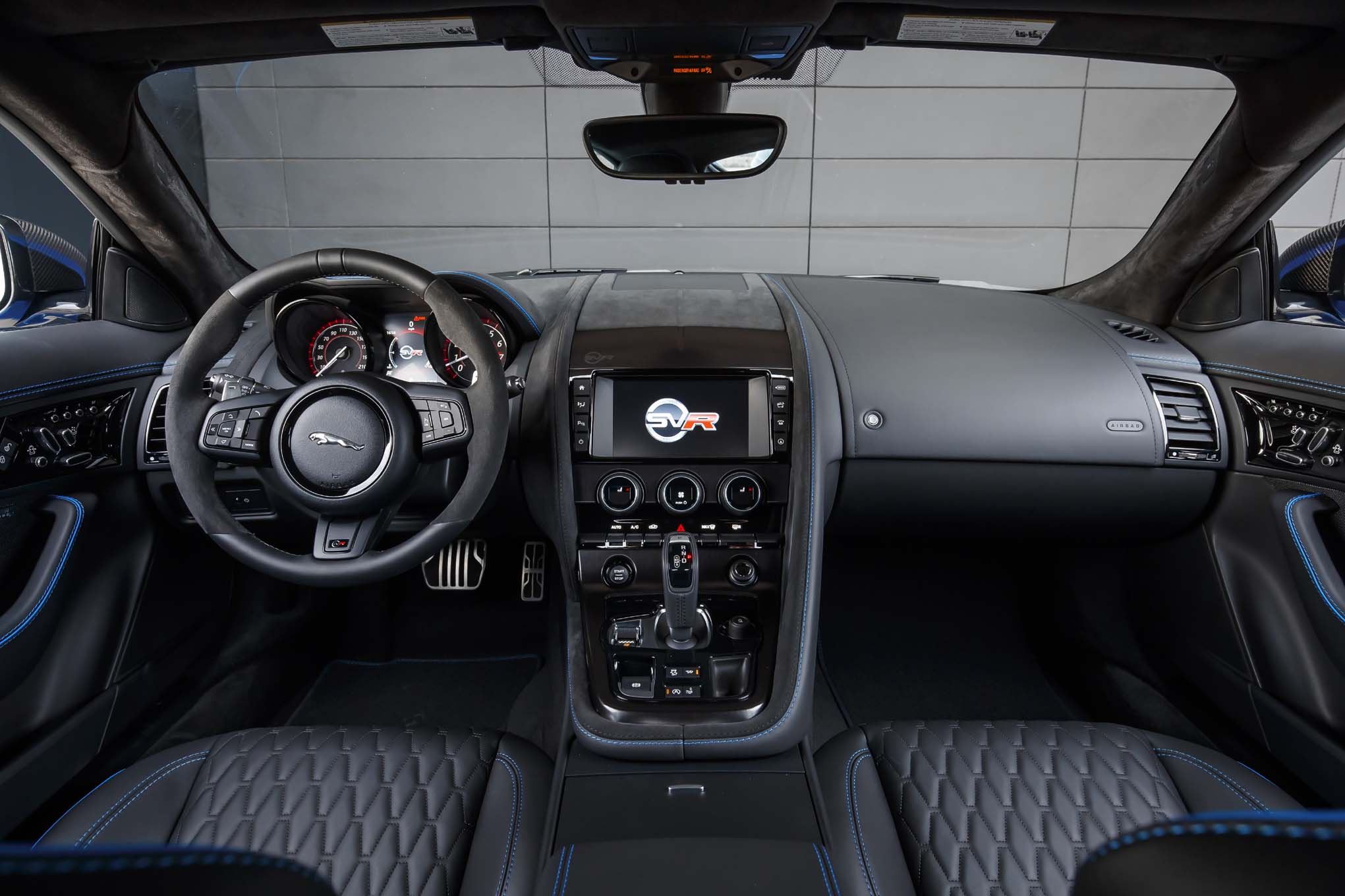 “Our objective was to take everything that our customers love about F-Type—the performance, the handling, the sound, the design—and take it to a whole new level,” John Edwards, managing director of Jaguar Land Rover Special Operations, says. Unmitigated success, we say. Jaguar has certainly polished the F-Type to an even greater degree and (mostly) addressed its minor imperfections we found in the R model. Where the F-Type R was a brash-sounding grand tourer whose dynamic limits were fairly easily teased out on a vigorous drive, the SVR requires an FIA-certified track to find even the slightest chink in its carbon-fiber armor. This is finally the world-class sports car we all hoped and imagined the F-Type would be.

Is it worth the $20,550 premium over the F-Type R? Only your financial adviser can tell you that, but the SVR does feel and drive like an entirely different and far superior sports car even if it sounds and looks similar. The better question: Is the Mercedes-AMG GT S $3,925 better than F-Type SVR? We’ll find out right along with you. In about a month’s time, the AMG will be defending its title as Motor Trend’s 2015 Best Driver’s Car, and Jaguar, who accepted the invitation to this year’s competition, is determined to better its ninth-place finish in 2014. We think 2017 Jaguar F-Type SVR will do far, far better than that. Stay tuned.