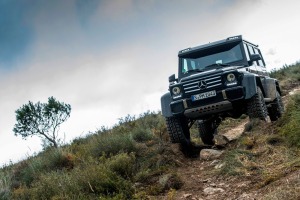 The newest member of the G-Glass lineup will offer buyers “unprecedented amounts of off-road capability,” the automaker said in a statement.

Key details, including pricing, fuel economy, curb weight and top speed, will be released closer to the launch date.

The all-wheel-drive G550 4×4 features ground clearance of more than 17 inches, three locking differentials and a 4.0-liter biturbo V8 engine that produces 416 horsepower and 450 pound-feet of torque.

A COMAND infotainment system with satellite navigation is standard.

The look of the iconic SUV has remained virtually unchanged since its rollout in 1979.

Key competitors to the G550 4×4 are the Land Rover Range Rover HSE and Toyota Land Cruiser.

Edmunds says: SUV buyers seeking the ultimate in off-road credentials along with country-club amenities in the cabin will want to check out the G550 4×4.