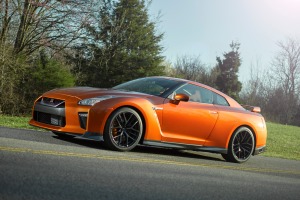 NASHVILLE, Tennessee — The refreshed 2017 Nissan GT-R Premium coupe will arrive at Nissan dealerships in mid-July with a starting price of $111,585, Nissan North America announced on Thursday.

The 2017 GT-R Premium is the first of four 2017 GT-R models. Prices for the additional trim levels will be announced at a later date, Nissan said in a statement.

Options include $3,000 Super Silver exterior paint and a $4,000 charge for premium interior packages. They are Rakuda Tan, Amber Red and Ivory.

Nissan said the improvements to the 2017 GT-R are the most dramatic upgrades since the car launched in the U.S. as a 2009 model.

On the performance side, the 2017 GT-R delivers an extra 20 horsepower and 4 more pound-feet of torque, courtesy of additional turbo boost and a more advanced ignition timing system. Output totals now stand at 565 hp and 467 lb-ft of torque.

The GT-R also features a stiffer chassis and revised suspension for sharper handling.

Key competitors to the GT-R include the BMW M6, Chevrolet Corvette and Porsche 911.

Edmunds says: Car shoppers in this segment should note that the 2017 GT-R gets a major round of enhancements and a price increase.