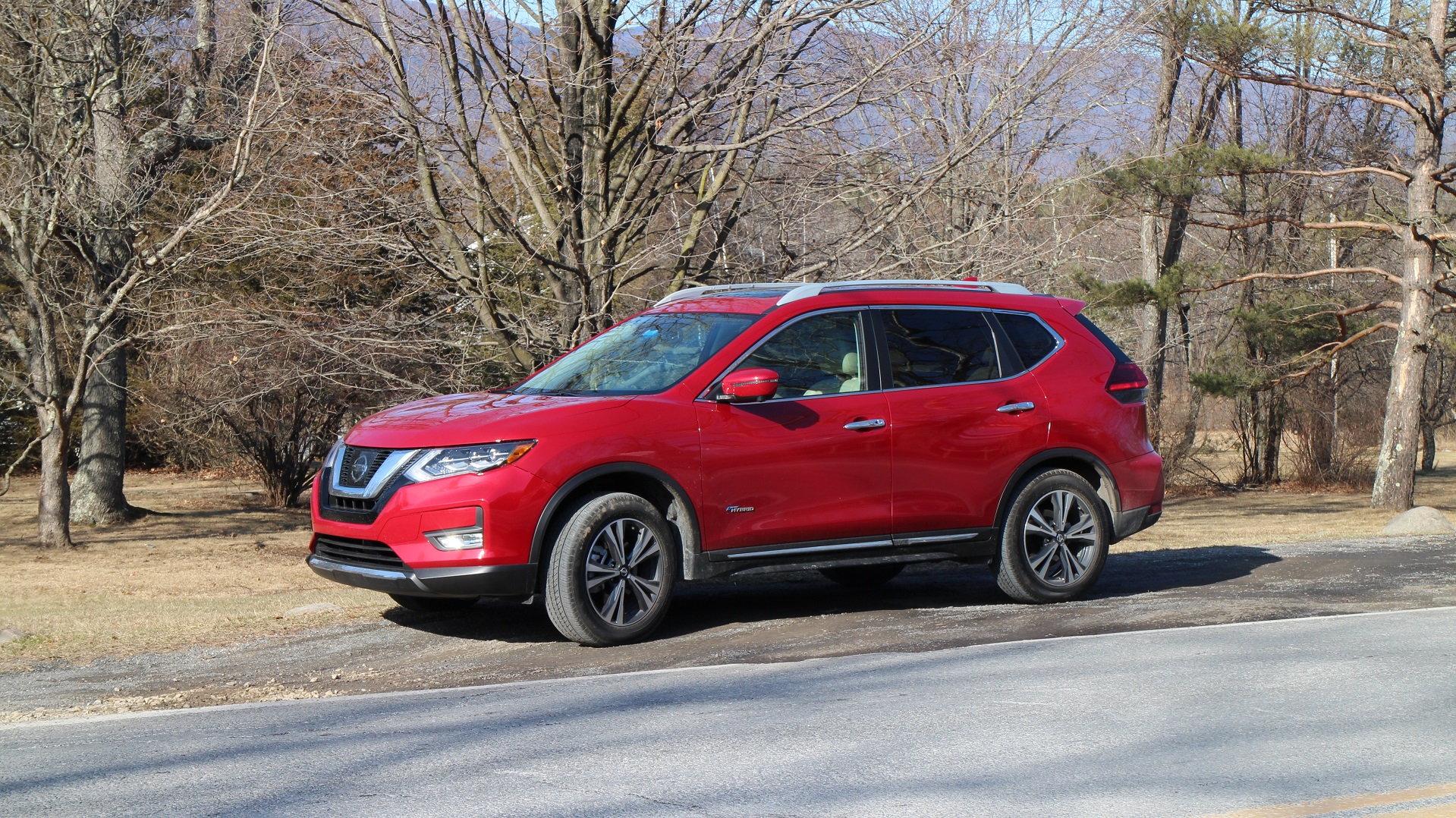 Last year, Nissan sold almost 330,000 Rogues in the U.S., making it by far the brand’s most popular model.

For 2017, the compact crossover utility vehicle has added a new model, a hybrid that competes with the very successful Toyota RAV4 Hybrid—of which 44,000 were delivered last year.

We recently spent four days and almost 380 miles with the hybrid Rogue, to see if its fuel economy lives up to its EPA ratings.

We also wanted to see how the Rogue Hybrid compared to the RAV4 Hybrid we tested 11 months ago.

In the Toyota, we covered 450 miles over roughly the same test cycle: about two-thirds highway and one-third around-town lower-speed use.

Our Rogue Hybrid test even had the same blustery Northeastern winter weather, with temperatures ranging from 25 to 40 degrees F. 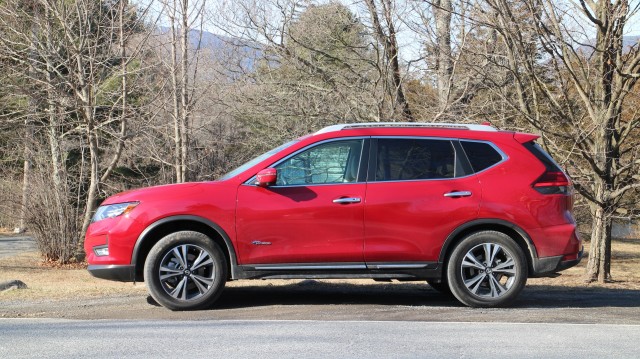 That 2016 RAV4 Hybrid delivered an indicated 30.4 miles per gallon per the trip computer, against an EPA rating of 32 mpg combined (lower than Toyota’s projected 33 mpg).

Our new hybrid Rogue test car was fitted with all-wheel drive, making it a direct comparison to the 2016 RAV4 Hybrid, offered only in AWD form.

The 2017 Nissan Rogue Hybrid AWD is EPA-rated at 31 mpg city, 34 mpg highway, and a combined 33 mpg—1 mpg higher than the AWD Toyota compact crossover. (The front-wheel-drive version comes in at 33 city, 35 highway, and 34 mpg combined.)

Over our 377-mile test, our AWD Rogue Hybrid returned an indicated 28.4 mpg—14 percent below the combined rating, versus a 5-percent difference for the Toyota.

Note that our tests aren’t really rigorous enough to determine effective fuel economy to the tenth of a mile per gallon; conditions, routes, and often weather vary.

But we consider them a good directional indicator of how close many buyers may get to the rated gas mileage, always depending on their personal driving styles. 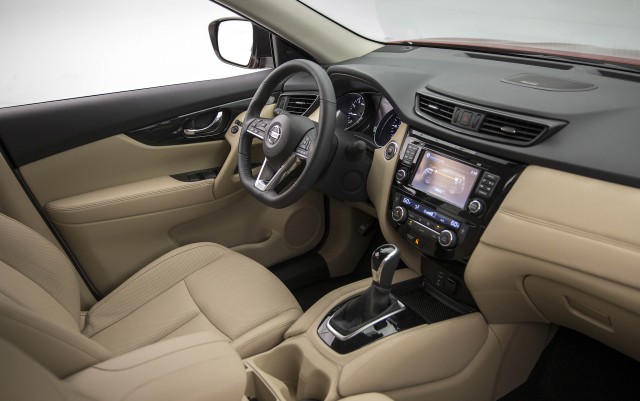 The hybrid Rogue’s higher rating against the RAV4 Hybrid was a slight surprise, because the Toyota uses a more powerful two-motor hybrid system similar to the previous-generation Prius.

Out of the pair of motor-generators, the one that powers the vehicle is rated at 105 kilowatts (141 horsepower).

In combination with a 150-hp 2.5-liter 4-cylinder engine tuned to run on the Atkinson cycle, the RAV4 Hybrid’s powertrain output is a combined 194 hp.

The Rogue Hybrid, on the other hand, has only a single 30-kw (40-hp) electric motor, sandwiched between the 141-hp 2.5-liter 4-cylinder engine and an adapted version of Nissan’s continuously variable transmission (CVT). Total peak powertrain output for the Rogue Hybrid is 176 hp.

A further difference between the two is that Nissan has retained mechanical all-wheel drive, like the old Ford Escape Hybrid.

The hybrid RAV4 blends torque from the gasoline-electric powertrain up front and an additional 50-kw (67-hp) electric motor between the rear wheels that kicks in only as needed. 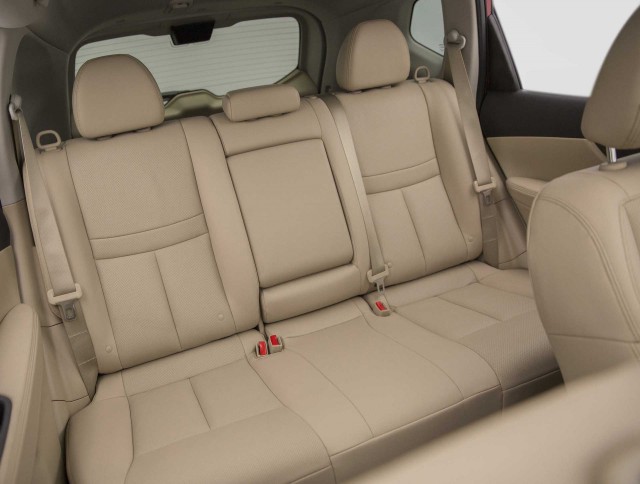 Nissan’s powertrain is a more powerful version of the previous mild-hybrid system fitted to the Pathfinder Hybrid and the Murano Hybrid, which used a 15-kw (20-hp) motor in the same setup.

The Pathfinder Hybrid was yanked off the market after a single model year (2014), and Nissan has suggested the Murano Hybrid is likely to sell less than 1,000 units in total.

We found the Pathfinder Hybrid unsatisfying and woefully short of its rated fuel economy during a winter test three years ago.

But Nissan clearly has higher hopes for the Rogue Hybrid, and the capacious SUV may in fact sell decently well.

While our 28.4 mpg wasn’t within the 10 percent we consider to be the maximum reasonable variation from the 33-mpg EPA combined rating, it was slightly better than the 27-mpg combined rating for the conventional Rogue Hybrid.

And most importantly, the Rogue’s noise suppression and sound insulation was good enough that many engine starts and stops weren’t noticeable with the audio system on.