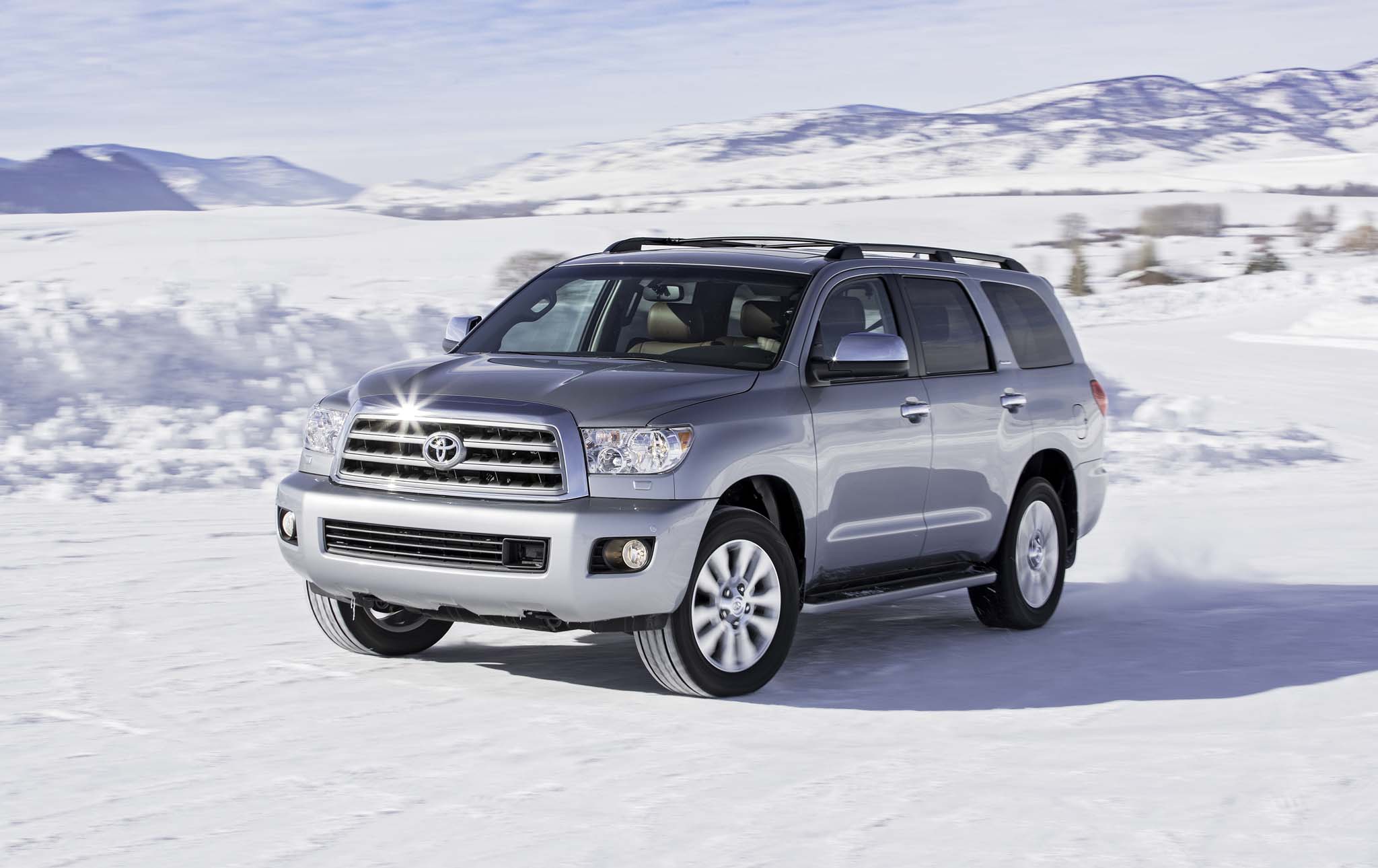 Can I tell you something? I really like Toyota’s big SUVs. The Land Cruiser, first and foremost, has been my favorite for . Is there a better SUV? Not really. Even if I’m wrong, so what? I love the thing. I’m not alone in my thinking, either. Corner a Toyota employee long enough, and they’ll eventually admit that although they only sell about 3,000 of the $86,000 off-roaders per year, we can all rest sound in the knowledge that the Land Cruiser is seen as the heart and soul of the company’s efforts in North America. The big cruiser is important to them as a company, and despite the low sales, it’s not going away. Nor is its mechanical twin, the Lexus LX.

The Lexus GX might be, however. Known in other parts of the world as the Toyota Prado, you can best think of the GX as Land Cruiser Junior. Sales of the GX are slow, and Lexus feels the need to have a more conventional three-row unibody luxury SUV to compete with the high-dollar and high-volume Audi Q7s and Mercedes-Benz GLSs of the world. Instead of the Prado, Toyota has been selling Americans the 4Runner for more than 30 years. Fun fact: 5.2 percent of all vehicles in the world with more than 200,000 miles on them are 4Runners. All of the above SUVs are wicked good on dirt, rocks, mud, and all that stuff. As a result, I like all of them. It should come as no surprise, then, that I also totally dig the 2017 Sequoia. 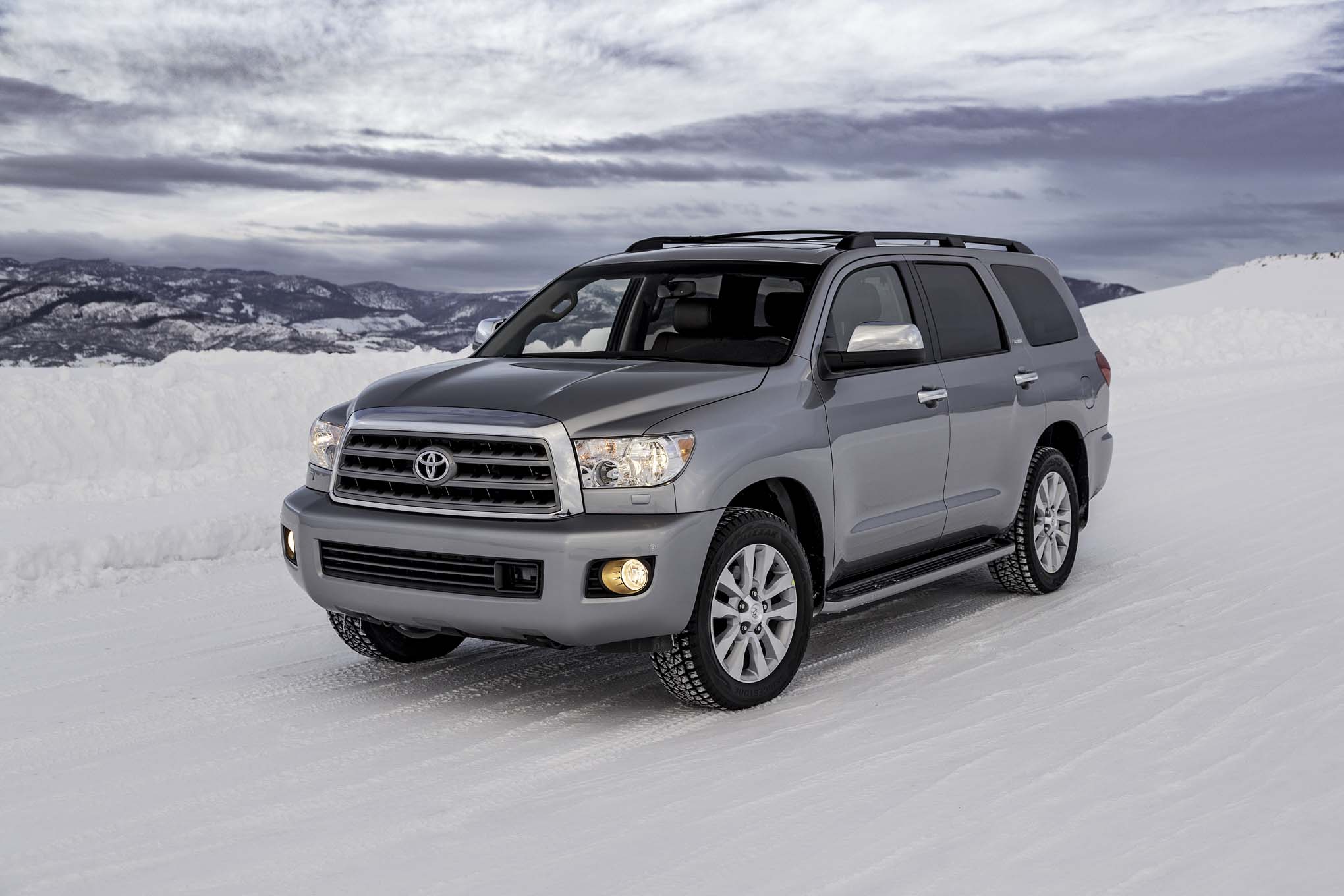 The biggest Toyota is fittingly named after the world’s biggest tree—redwoods are taller, but Sequoiadendron giganteum are the largest living things on Earth. The Sequoia is the only SUV whose name contains all the vowels. Think about it. Sequoia might as well contain all the consonants, too, because the SUV is truly massive, tipping the scales at 6,081 pounds. For a little perspective, the last Chevrolet Tahoe we tested, a 2015 4WD LTZ model, weighed in at 5,744 pounds. We also happened to weigh a same vintage Chevy Suburban 4WD LTZ, and that longer American undercut the bulging Japanese people-hauler by 129 pounds, coming in at 5,952 pounds. The Suburban-based, mack daddy Cadillac Escalade ESV weighed 6,027 pounds. The regular-length Escalade weighs 5,870 pounds. You should know that the Tahoe has a 116-inch wheelbase, whereas the Suburban sports 130 inches between the wheel centers. The body-on-frame Sequoia neatly splits the difference with a 122-inch wheelbase. Basically, the Sequoia is big.

As for handling, well, the less said the better. The Sequoia completed our figure-eight test in 29.1 seconds. That’s not surprising considering its heft and that at most it can pull 0.73 g’s laterally. The Tahoe completed the figure eight in 28.3 seconds. That’s a significant difference. We use a Chevrolet Tahoe every time we film an episode of Ignition or Head 2 Head, and I can tell you that the entire crew is typically impressed with the handling prowess of those big, old boats. The Suburban can run the figure eight in 28.4 seconds, whereas the two Cadillacs were good for 28.1 and 27.9 seconds, respectively. And no, I have no idea why the ESV was 0.2 second quicker than the shorty Caddy. The Sequoia stops from 60 mph in 130 feet. The Tahoe needs 121 feet, the Suburban 126 feet, the regular Escalade needed 129 feet, and the ESV required only 119 feet. Even though the Sequoia is back of the braking pack, at least it’s comparable.

But the numbers only tell part of the story. I drove this Sequoia from Escalante, Utah, in the dead of winter to Las Vegas before heading home to Los Angeles, and I think it’s performance there is the more important part. It’s one of the finest road-tripping machines I’ve driven in some time. First of all, the front seats are massive, quite possibly the largest thrones in the industry. I’m not really sure how to fact-check that assertion, but the huge seat backs were comfortable during such a long trip. The ride was also excellent, and when combined with those big front seats, it made the Sequoia as good as anything I’ve ridden more than 1,000 miles in. One road-trip gripe is the lousy infotainment system. We all found it so frustrating to program that we stopped bothering and just relied on our vastly superior phones and iPads to navigate. I’ve been told Toyota is aware that their infotainment system is among the worst in the business. It simply doesn’t care. Smartphone it is then. Besides, even if the Sequoia had Apple CarPlay, you still can’t run Google Maps or Waze. So you might as well use your phone.

My other big road trip gripe is the cruise control. I’ve long been a believer that every car has a speed it’s most comfortable going. To keep it in the Toyota family, the new Lexus IS 200t is happiest at 85 mph. Go figure. The Sequoia, with it’s big, angry-sounding V-8, loves to go about 70 mph. And that’s a fine speed. Unless you’re in Utah, where the speed limit is 80 mph. You set the radar cruise control at 85 mph, kick back, and relax. Before you know it, you’re watching your speed fall. Huh? Well, the first problem, as my director Anthony Esposito pointed out, is that there’s no BMW mode. Meaning even when assigned to the closest setting, you’re still what feels like 500 feet from the car in front of you. I want to be on someone’s bumper. Because with a gap that large, people are always jumping in front of you, leading to the second problem. When the radar sees a car come across the Sequoia’s bow, it deactivates the cruise control. I spoke with a Toyota engineer about making their cruise control work better and was told something to the effect of, “Powertrain and electronics are separate departments.” Great.

All that said, my gripes with the Sequoia (pitiful fuel economy—13.6 mpg observed on the freeway uphill, 13.7 mpg downhill) are few, and the things I enjoyed about it are many, starting with that lovely V-8, which will soon be replaced by a twin-turbo 3.5-liter V-6 mated to a 10-speed automatic transmission. How many full-size SUVs can you think of that sound so good? Basically, only the 6.2-liter versions of GM’s big dogs make such sweet music. And did I mention how nice the materials in the interior are?

Not many people need a body-on-frame, three-row SUV with low gears. However, should you find yourself embroiled in a cross-country road trip with a few of your closest co-workers, their stuff, and camera gear atop a 9,000-foot mountain pass in the middle of a blizzard, I highly recommend the Toyota Sequoia. Like all the other large Toyota SUVs I’ve driven, I was disappointed when it came time to hand the keys back while hatching a plan to somehow get them back. Long live real trucks. Long live the giants.