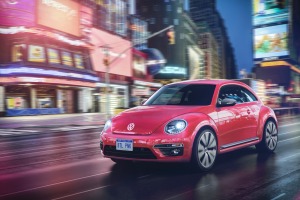 Pricing will be announced closer to the launch date, but VW said this version of the iconic car is “value-oriented.” It will be offered in both coupe and convertible models.

The German automaker also says this is the first vehicle to have its own hashtag. It was first shown in concept form at the 2015 New York Auto Show.

The #PinkBeetle is equipped with a 1.8-liter turbocharged direct-injection TSI engine and a six-speed automatic transmission. Output is pegged at 170 horsepower and 184 pound-feet of torque.

Pink vehicles have popped up throughout automotive history, although many consumers will think of them mainly as the domain of Mary Kay cosmetics, which has rewarded top salespeople with pink cars.

Elvis Presley drove a pink Cadillac and the Dodge LaFemme coupe, which was sold in the 1950s, had pink touches.

Car shoppers who want a pop of color may also consider such Beetle competitors as the 2016 Hyundai Veloster, which can be ordered in “Vitamin C,” a vibrant orange shade, or the 2016 Mini Cooper, which comes with a $500 Electric Blue exterior paint treatment.

Edmunds says: This pink Beetle is aimed at car shoppers who want to be an “automotive trending topic,” VW says.