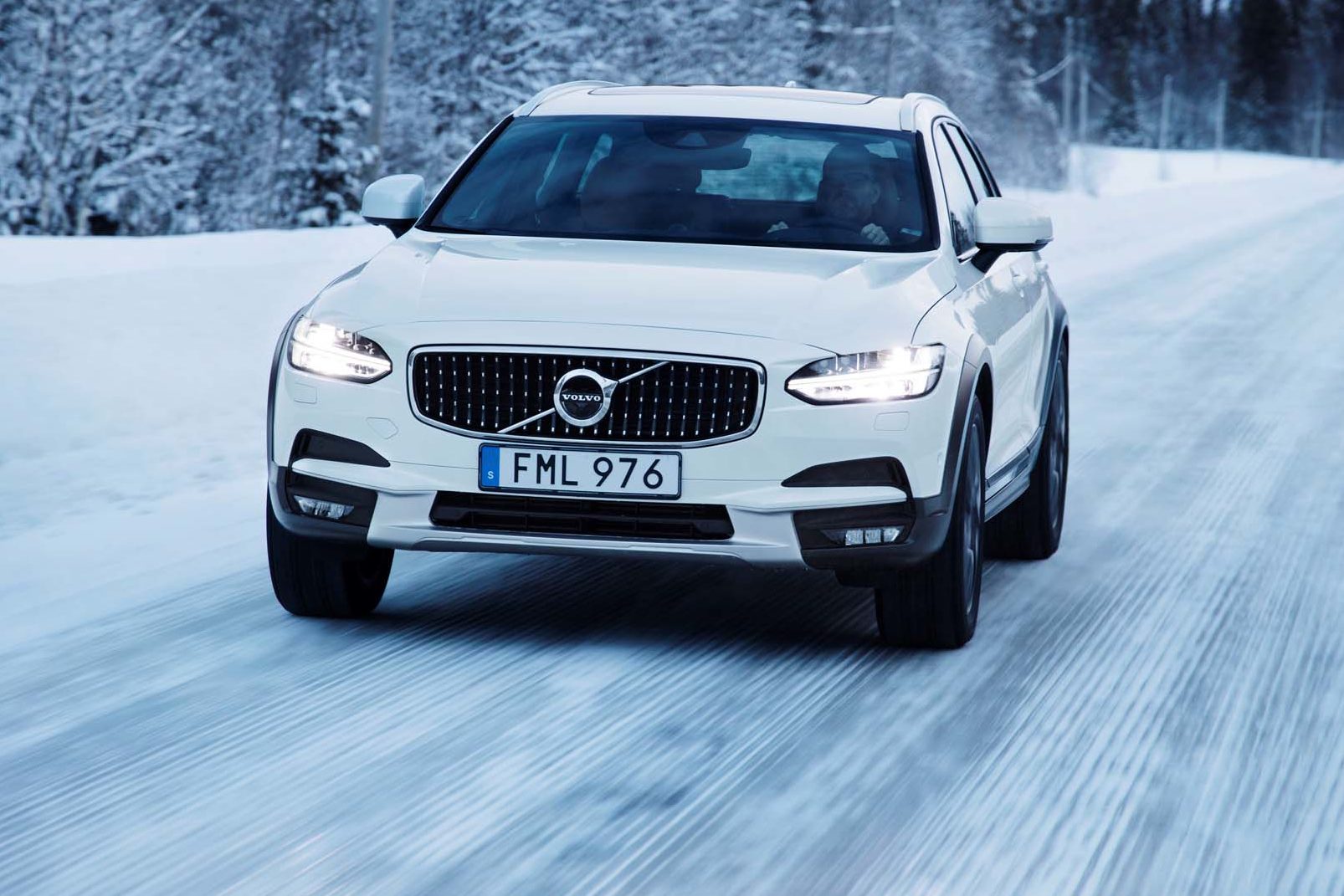 It might be a wagon. But take it to a frozen lake in northern Sweden on a mild day when the ice is covered in a watery sheen, and the Cross Country version of the Volvo V90 wagon drifts with the best of them.

Recognizing that few will get to Lake Andsjön under these conditions, we’ll get back to how nicely the car glides later.

The V90 is the latest to add Cross Country to its model lineup—a nice addition to mark the 20-year anniversary of Cross Country and all-wheel drive. Cross Country is a distinction that comes with a promise that the wagon will perform like a premium car on the pavement but is prepped and ready to leave the beaten path.

To that end, the Cross Country has 8.3 inches of ground clearance compared with 6.0 inches for a regular wagon, putting it only 1.1 inches shy of the XC90 crossover without air suspension. 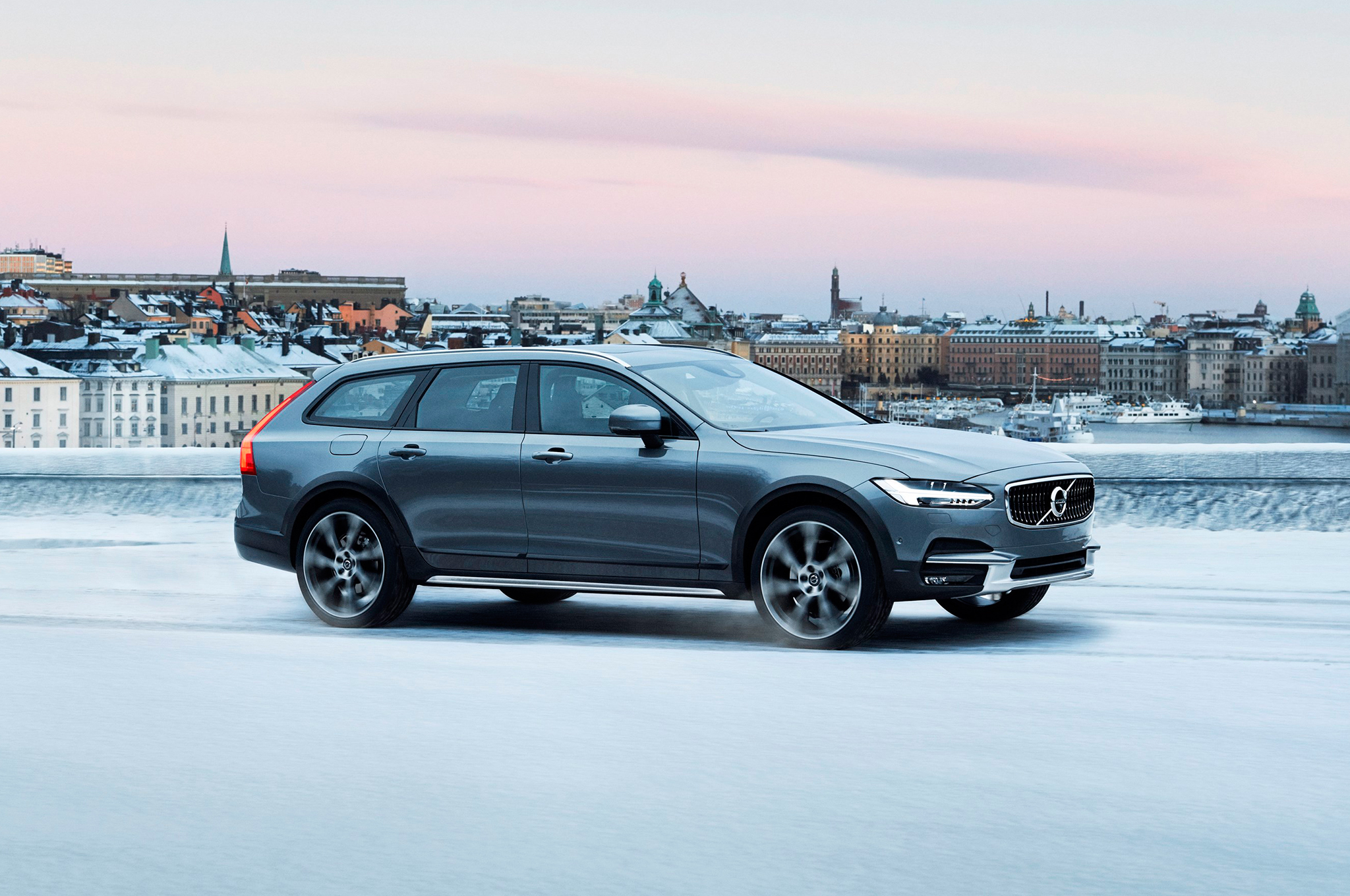 Given that Americans love their SUVs and have never fully embraced the station wagon, Volvo will stock U.S. dealers with the V90 Cross Country starting in March.

But if you want the regular but smaller-volume V90, you must either order online through the Volvo Concierge website or participate in the overseas delivery program where you travel to the factory in Torslanda, Sweden, to accept your new car. It’s then shipped to a U.S. dealer for the final consummation of the purchase. V90 pricing will be announced during the Chicago auto show, which opens to the media Feb. 9. The order books will also open at that time. The cars will start arriving in the summer as 2018 models.

The 2018 V90 can be ordered as a front-drive T5, meaning it has the turbocharged 2.0-liter four-cylinder (240 horsepower) or the T6 with the turbo and supercharged engine (316 hp) and all-wheel drive.

Buyers will also be able to opt for the Polestar Performance Optimization package—not to be confused with sending a vehicle to a Polestar facility for the roughly 70 mechanical changes to create the performance variant. Optimization can be done at the port or factory; it is largely a software program to change the throttle mapping, boost horsepower and torque, and adjust shift speed.

Volvo execs also say it is technically feasible to create a hybrid T8 version of the V90 as well, if Volvo feels there is enough market demand. No decisions have been made yet.

Volvo expects to sell about 4,000 Cross Country models in the U.S. compared with about 1,000 regular V90s. There isn’t much competition in the niche segment: the Audi A4 Allroad and the Mercedes-Benz E-Class wagon. For Volvo, it fills a gap left with the discontinuation of the smaller XC70.

It is not surprising Swedish-based Volvo created Cross Country; 80 percent of the country is forest and lakes, so all roads lead to them.

The wagon is not only higher off the ground to navigate any terrain, but the wheels have also been set wider, and the wagon has a new softer and rounder profile tire to absorb the uneven surfaces. Skidpads and hill descent control are standard.

There were more than 200 tweaks to the chassis system for the CC. When you adjust the ride height and chassis, it’s like engineering a whole new car, says Stefan Karlsson, manager of vehicle dynamics.

The V90 CC has a double wishbone suspension, and the integral rear link suspension is standard; there is an optional rear air suspension system with active chassis. Driving on roads with layers of old and uneven ice created a washboard effect, and our car with the air suspension sopped up the surface nicely. We can’t speak much to the smoothness on regular pavement given that the wheels were shod in Nokian double-studded tires developed for Nordic conditions. The tires affected everything from steering to noise to longer braking distance. But they sure kept the vehicle from stumbling in any way.

In terms of the suspension, engineers said because the wagon is so carlike, there was no need to spend the extra money for a full air suspension system; rear was good enough. 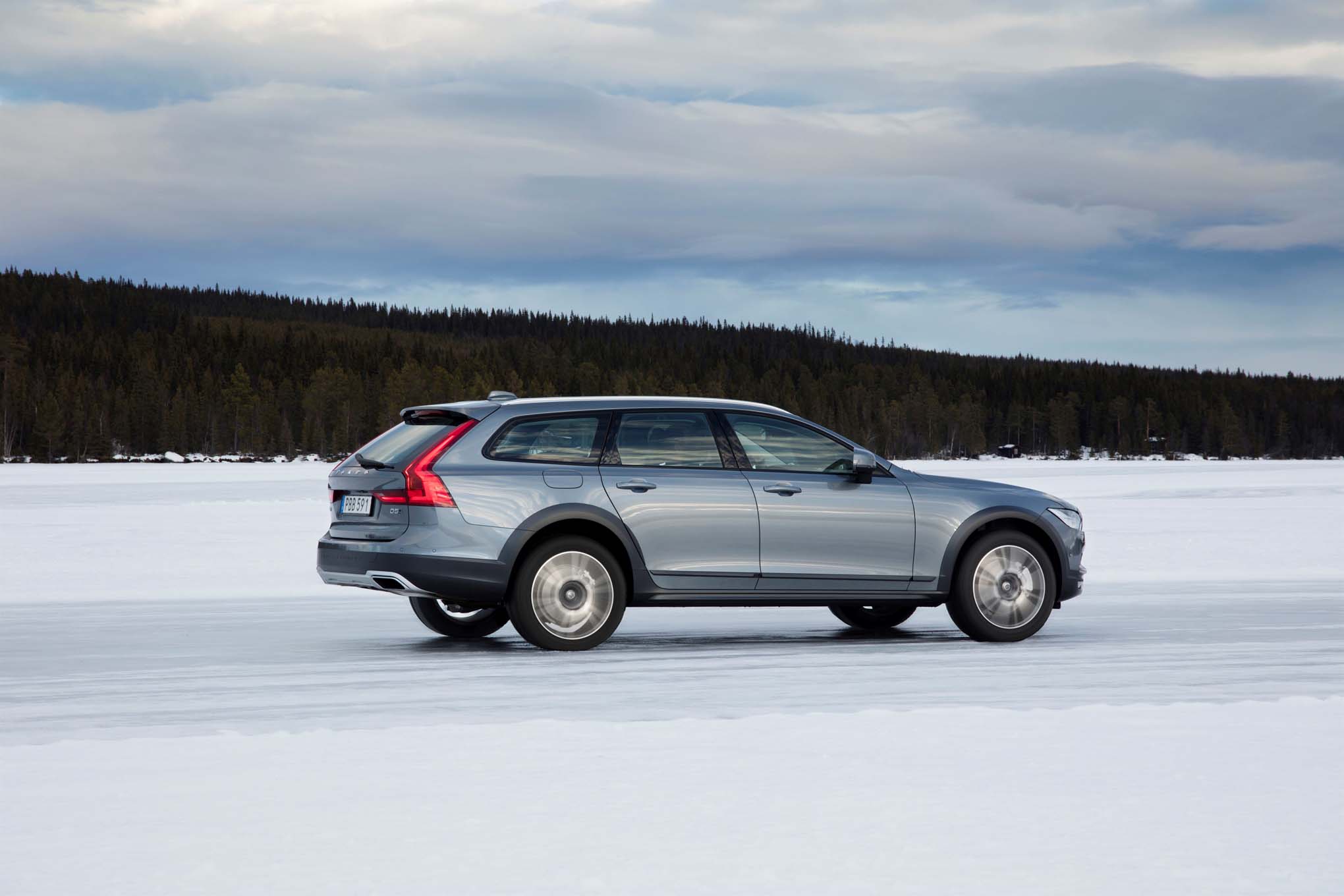 The wheelbase of the V90 is the same as the S90 sedan, but the wagon’s total length is actually shorter. The wagon weighs a bit more at 4,221 pounds, largely because of the standard fifth-generation all-wheel-drive system.

Drive modes include Eco, Comfort, Dynamic and Off-road, which transfers torque to the rear wheels at all times at speeds up to 25 mph. In other modes, the power is sent to the back axle only when needed. A full 100 percent is directed to the rear if the front wheels are on ice for maximum stability and traction.

We turned the stability control off on Lake Andsjön because it was really an exercise in pure hedonism. We can pretend we learned something about the characteristics of the vehicle on the makeshift slalom and handling courses set up with orange stakes stabbed into the frozen lake. Sure, the car showed nice control with a steady foot on the throttle to power the rear wheels out of the turn.

But the takeaway is that even with double-studded tires, this wagon is sheer fun on the ice, especially when there’s enough water on top to hydroplane. The rear slides out best if you cry out “wheeeee” loud enough to make your driving partner laugh.

Back on real roads, we were able to test the latest version of Pilot Assist, which offers semi-autonomous driving by offering corrective steering and braking up to 80 mph. The original Pilot Assist, by comparison, was only operational to 30 mph. Most of our driving was on roads with poor or no lane markings, but where roads were marked, the system did its job. Disconcerting is that when it could not read the lanes, it stopped working with no warning, so driver diligence was required at all times.

Visually, there are few cues to distinguish the Cross Country from the regular V90. The Cross Country adds black gloss and dons a metal stud grille as opposed to the waterfall grille on the V90. Black gloss replaces the chrome trim around the windows, and there is black or color-matched trim around the wheel wells. U.S. customers have a choice of 19- or 20-inch wheels with Pirellis.

The V90 Cross Country we drove had dark walnut open pore trim on the dash door, which is not easily recognizable as wood, especially after we had fallen in love with lighter, open pore woods in the XC90. The other choices include aluminum or flame birch with a grain native to the Swedish tree, and it is heavily lacquered. The detail-oriented will notice the Cross Country has unique pearl stitching, a combination thicker-thinner stitch designed to appear a bit more elegant.

Heated seats and steering wheel are standard, as are the Thor’s Hammer daytime running lamps. The rear hatch opens via key fob or a foot kick below the sensor.

Like all new models, the V90 Cross Country has the Sensus infotainment system with a large touchscreen and a number of screens to swipe though for assorted commands. Apple CarPlay and Android Auto are standard, and the optional Bowers & Wilkins stereo has 19 speakers.

Volvo can send over-the-air updates but only for the infotainment system—not critical vehicle systems.

In Sweden and Norway there is Volvo-to-Volvo connectivity, so alert other drivers of slippery conditions or anything dangerous enough to require hazard lights—perhaps, a lake that makes you cry “wheeee.”