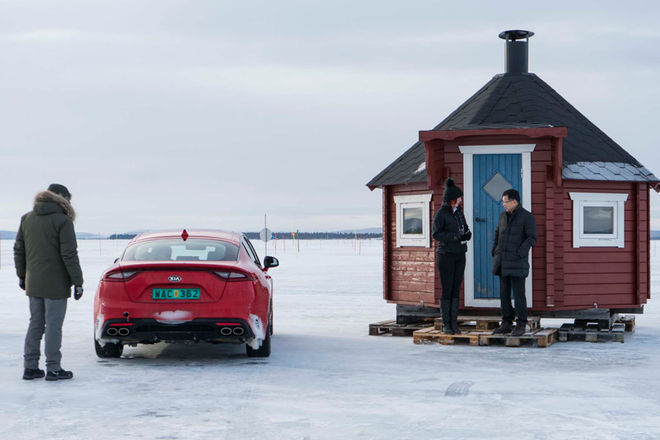 About every November, low enough, the temperature drops, a large shallow lake outside Arjeplog, Sweden begins to freeze. The lake is clearly no name is more than 97,000 lakes in Sweden, but the purpose of this story, we call it Lake Mobius car supplier Hyundai Motor, the removal of trees and the establishment of Hyundai Motor Group (HMG) winter test equipment as early as 2005 it’s here.

The temperature in Lapland should be from 5 to 40 degrees Fahrenheit (- 15-40 degrees Celsius) at this time of the year (mid February), the average daily snowfall of about 30 mm (about 5 inches) of ice to form excellent conditions. 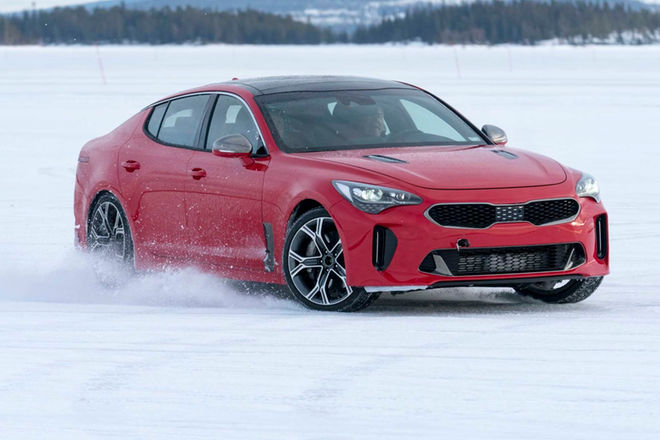 The lake ice is just over a meter thick in the dead of winter, but time is short. Although it might start freezing as early as November, the ice is usually gone by May, and the period of time where vehicles can be safely driven on Lake Mobis is only 10 weeks long. The pace is frenetic; most of the engineers work 14-hour days (well past winter sun up and sun down) and only take Sundays off, if at all.

So it was quite a feat for Kia to suspend normal operations and allow us to a sample a prototype and preproduction 2018 Stinger GT on Lake Mobis’ test tracks, especially because unseasonably warm temperatures the week before we arrived created pools of standing water. Thankfully, they refroze a day before we arrived. 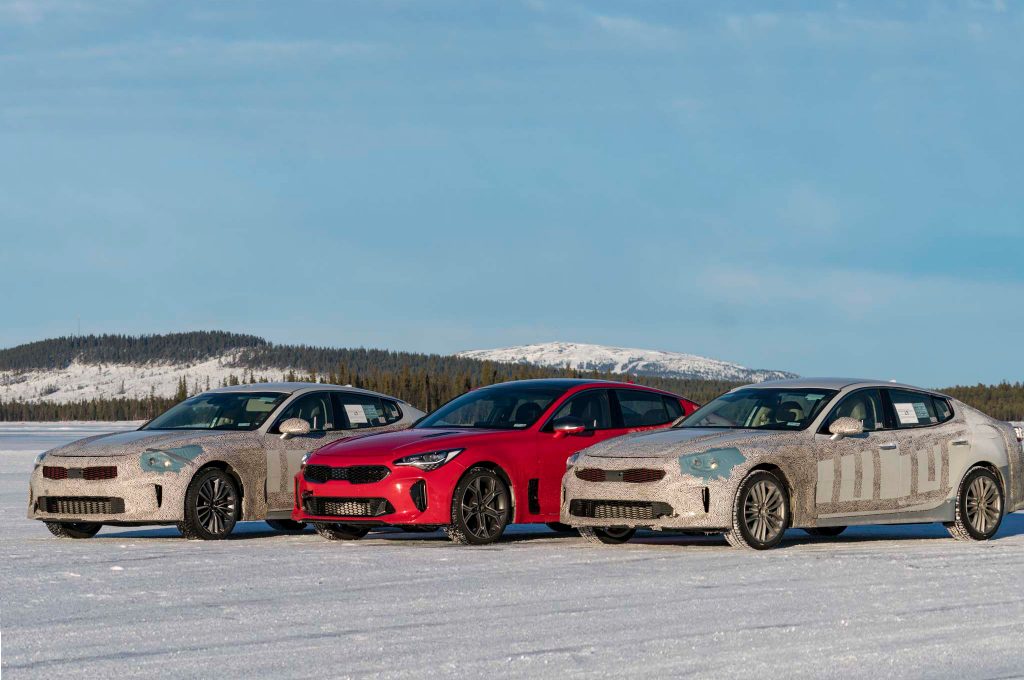 You’ll remember Stinger as the darling of the 2017 North American International Auto Show—a 5-passenger, four-door “coupe” available in rear- or all-wheel drive. In a preproduction all-wheel-drive Stinger GT, equipped with the 365-horsepower 3.3-liter twin turbo V-6, we tackled Lake Mobis’ slalom course and small skidpad. Thanks to winter tires and all-wheel drive, we had good traction and control through the cones and what felt like minimal ESC/TCS intervention. The subtlety of the brake and throttle intervention became clear as we clicked these systems off. Our target through the slalom was 28-31 mph (45-50 kph), but with systems off, we rarely saw more than 25 mph before the Stinger’s rear end started sashaying to a tune all its own.

Safety credentials established, Kia next goal was to demonstrate what kind of fun is possible with the Stinger’s AWD system. Driving fun is not typically the first thing associated with AWD, but HMG’s performance guru, Albert Biermann, is intent on changing that perception. Biermann, as you’ll remember, spent 32 years with BMW and lead the company’s vaunted M performance division before being hired to HMG. 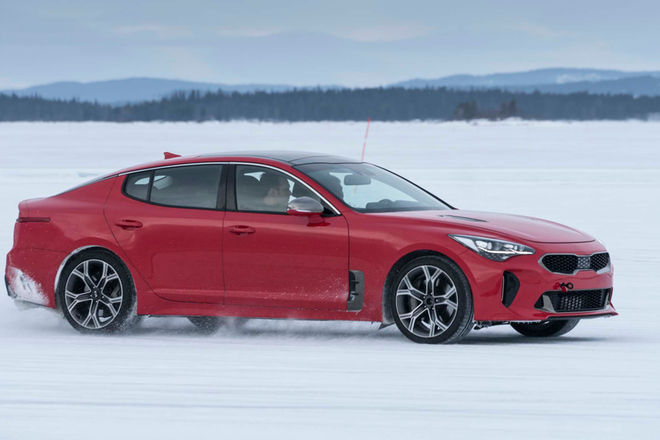 Stinger is essentially rear-wheel drive, but up to 50 percent of engine torque can be sent to the front axle via a mechanical clutch in the transfer case (torque is not split side to side.) In normal driving situations, Stinger’s default Comfort mode sends up to 40 percent of engine torque to the front wheels. Push the button for Sport mode and the number drops 20 percent to make Stinger behave more like a rear-wheel-drive vehicle. More freedom to go sideways is also allowed in Sport mode—yaw sensors allow for a greater degree of slip angle before engine output is cut and ABS actuators are engaged. Then there are the aforementioned TCS and ESC systems; unlike most vehicles in HMG, Stinger will come to market with a two-stage system similar to those seen on high-end German sport sedan rivals. At the push and hold of a button, ESC and TCS can be fully shut off, leaving only ABS to help stop shenanigans. 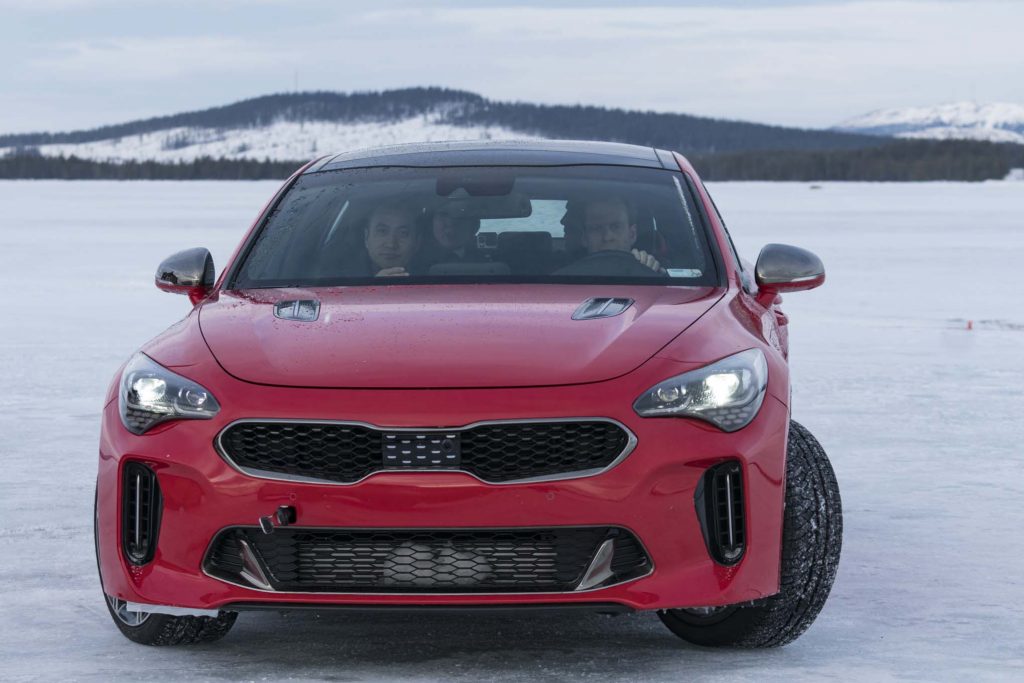 At the request of a quiet Korean test driver, we were instructed to begin accelerating in tight circles around a fixed cone until we were drifting. The Stinger GT’s 330 lb-ft of torque is more than enough to get all four wheels spinning on slippery lake ice, so the trick was keeping the front wheels angled into the turn as the tail stepped sideways. With all systems on in Comfort mode, drifting donuts was nearly impossible. The moment any yaw was induced, ESC and TCS stepped in, slowing the vehicle into a safe forward plow, no matter, it seemed, which way the front tires were facing.

In Sport mode, there was a bit more fun to be had; launches had more wheel slip and turning into a slide was now possible—up to a point. Any earlier than 10:30 or later than 1:30 on the Stinger dial and the background systems straightened out horizon.

Shutting down TSC and ESC (which lights up a little amber triangle in the instrument cluster) brings visions of Formula D or Global Rallycross stardom. There is no nanny to prevent running the engine to redline as the fronts and rears scrabble for grip. There is no automatic firing the ABS when the rear hangs too far out or a suddenly grippy bit of ice sends the nose shooting the opposite direction. Speeds go up, drifts go long, and spinouts become imminent and unrecoverable. It’s kul (fun in Swedish), but over way too quickly. 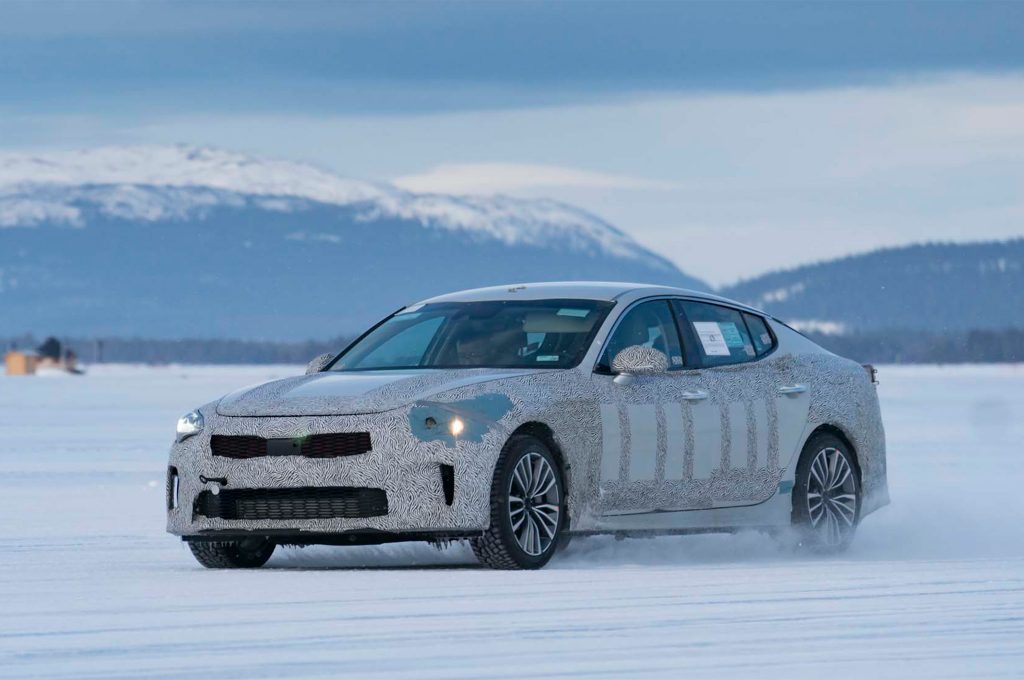 There is more kul to be had when we jump into the rear-drive Stinger GT on the much larger circle track. Clearly, Biermann and his engineers place a great deal of emphasis on drifting because the goal of this exercise is to get us to hold a sustained two-wheels turning, two-wheels churning slide around a 1,640-feet (500-meter) diameter circle of ice. That’s yuge.

The program is the same as before; tool around in Comfort to see how well the rear-drive Stinger keeps things plowing in the right direction on an excessively slippery surface. Gradually remove the nannies, but this time bring the speed up to carry momentum around the giant circle. Our Kia co-driver advises manually paddling the eight-speed transmission to fourth gear, and tells us that Stinger will hold the gear at redline without upshifting. He also reminds us that the GT comes equipped with a mechanical-type limited-slip differential (LSD) with a carbon friction disc, which means both rear wheels will rotate together when the throttle is open, making drifts and donuts that much easier.

And indeed, turning side window into windshield is far easier in the rear-drive Stinger GT. Without the front wheels to tug and grab, it’s not only quicker to induce yaw, the rear-drive Stinger can also hold a much deeper angle of attack. When sliding on ice, course corrections are made with both hands and feet; more throttle and steering usually creates a faster, deeper angle, and less of both straightens everything out and slows things down. Confuse any of this while drifting, and you’ll end up spinning helplessly across the ice—while thanking Kia, Mobis, Biermann, and Swedish weather for 162 hectares of meter-thick ice and no fixed structures. Get it right, and it’s Lingonberry-sweet; we hit and held opposite steering lock several times around the circle but were not able to hold “full oppo” all the way around because of the deteriorating surface conditions caused by all the frosty donuts. Like the other driving exercise, it was all over much too quickly.

Still, the takeaway message was ice-crystal clear. Fun-to-drive might be the tip of Kia’s Stinger when it comes to market in early 2018. Stay tuned.