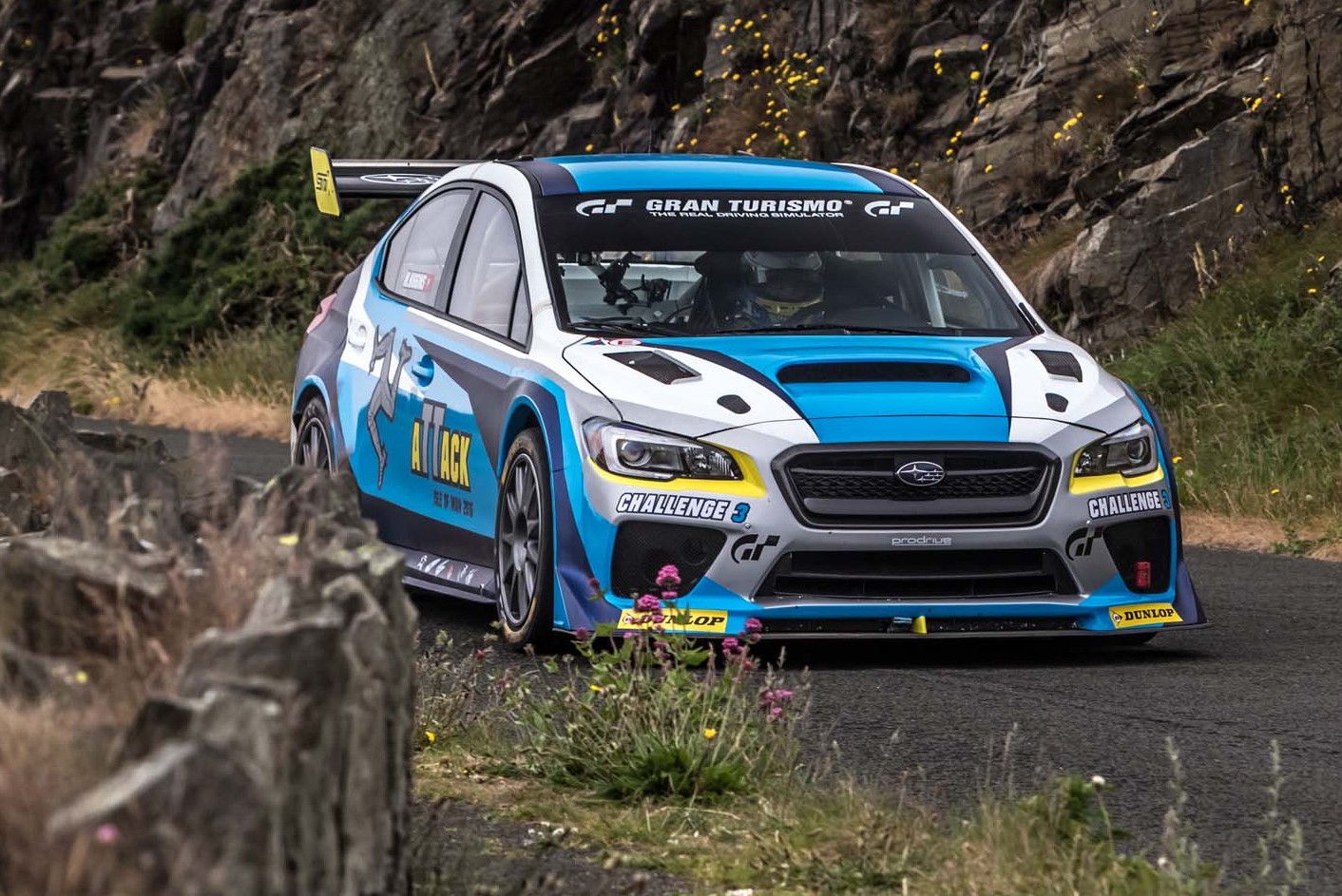 On Monday, June 6, a Subaru WRX STI with a custom engine, custom suspension, custom wheels, custom aerodynamics, custom roll cage, and one focused rally driver—Mark Higgins edition—stormed the 37.73-mile-long Isle of Man Tourist Trophy (TT) course at an average speed of 128.73 mph. That translates to a lap time of 17 minutes, 35 seconds, and 139 milliseconds, good for the car lap record that was most recently broken the previous Saturday (17:49.755 at 126.97 mph) also by Subaru/Higgins. What participants, event-goers, and records geeks really care about is that average speed. There is no liberal mph rounding. If one clocks a run at 129.99 mph, one is not gifted 130.

That quest for speed has made Subaru and local Manx boy Higgins the fastest pair to go around the TT in a car. The Isle of Man TT is one of the most infamous motorcycling events in the world. Subaru has been making quite a splash with its four-wheel attempts around the Isle, including a doozy of a high-speed tank-slapper (that was skillfully saved) back in 2011 with Higgins at the wheel of a stock WRX STI.

What started as an exhibition with mostly stock WRX STIs has turned into a remarkable project, the Subaru 2016 Isle of Man TT Challenge Car. A 2015 WRX STI that was already on the Isle of Man was sent off to the motorsport connoisseurs at Prodrive, where a beast of a big-wing sedan was created in collaboration with Subaru of America and Subaru Tecnica International. Its sole purpose is to go as quickly as possible around the lengthy, bumpy, and very fast TT course. This is how it did it.

Weight, and its Distribution 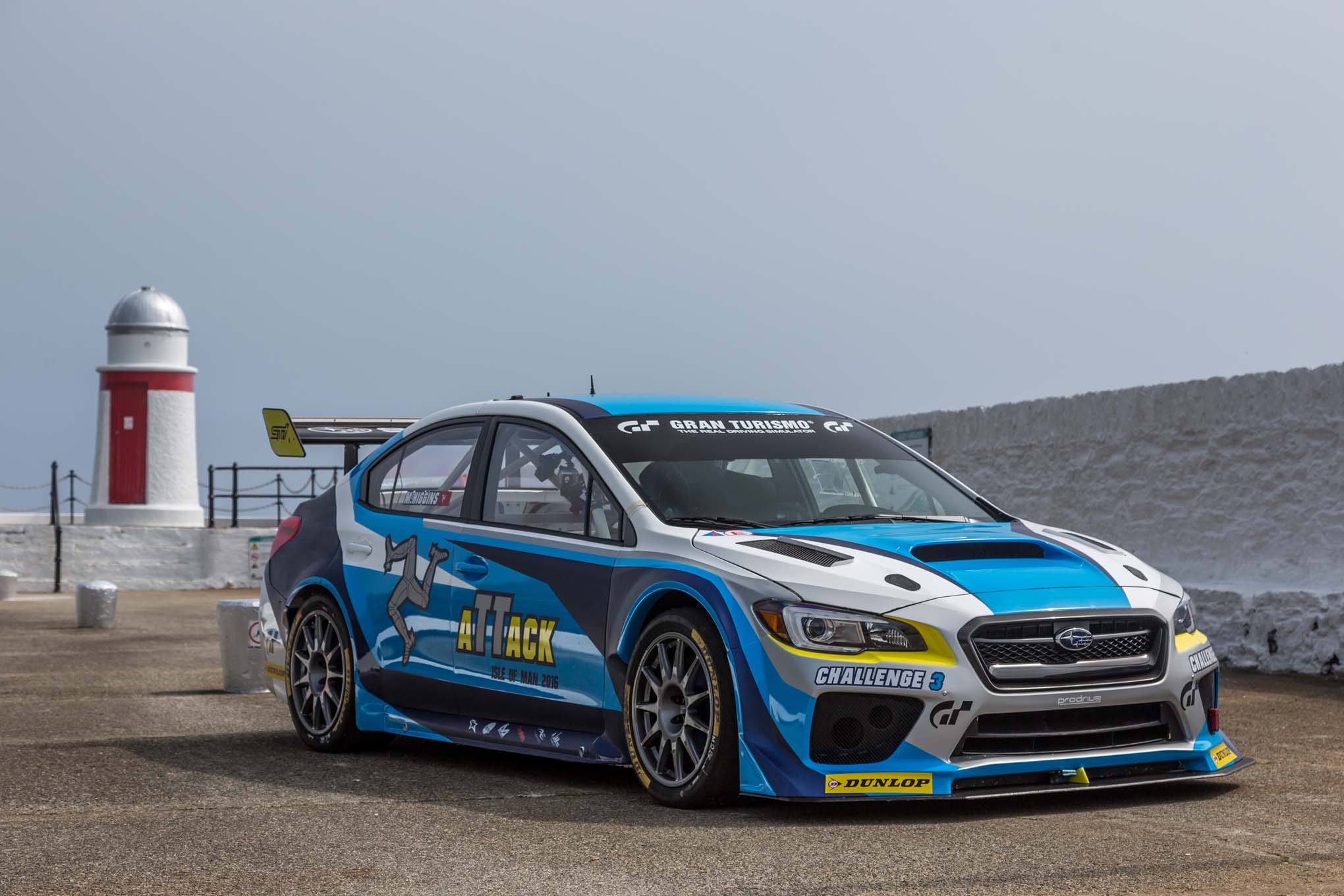 This generation’s stock WRX STI weighs around 3,350 to 3,400 pounds based on three street cars we’ve been in possession of. The Isle of Man TT Challenge Car, gutted of its interior and lightened, is closer to 2,600 pounds. According to Prodrive, the outfit famously associated with Subaru’s defunct World Rally Team, there’s still plenty of lightening that can be done.

That weight is more optimally distributed in the race car. The stock WRX STIs we’ve tested level out at 59/41 percent front/rear without a driver. The Challenge Car is much closer to the 50/50 balance, achieving 52/48 percent. And that’s 52/48 percent with Higgins in his seat. 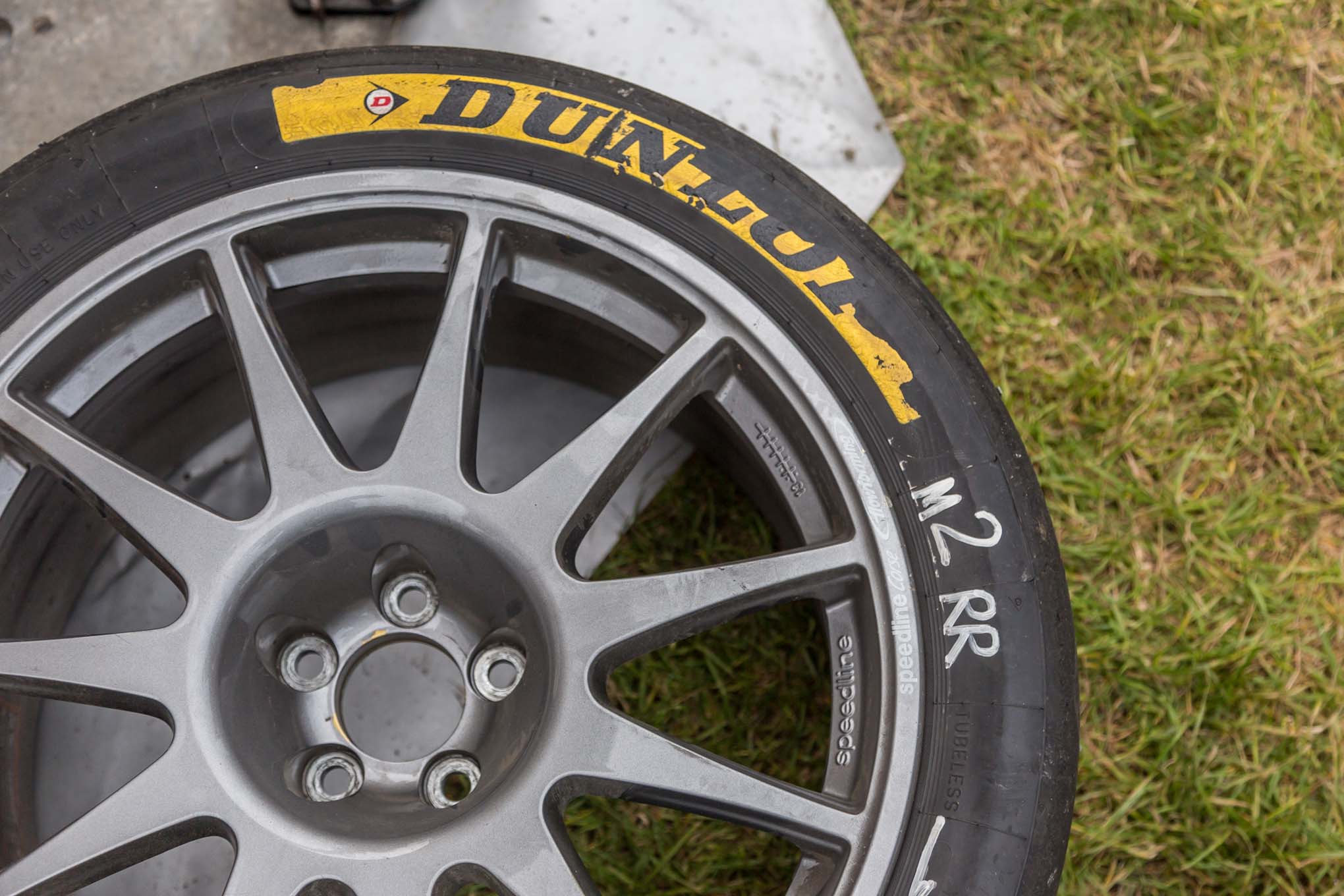 Dunlop, a major TT sponsor, can be found everywhere on the Isle of Man. Including on the Subaru TT Challenge Car, where groove-less Dunlops sized 245/650R18 and obtained from the British Touring Car Championship establish contact. Three types of Dunlops were available for the WRX STI: a grooved rain tire, and a soft and medium slick. Because the Isle was atypically warm and precipitation-less this year, Higgins set the June 6 lap record on the harder mediums. 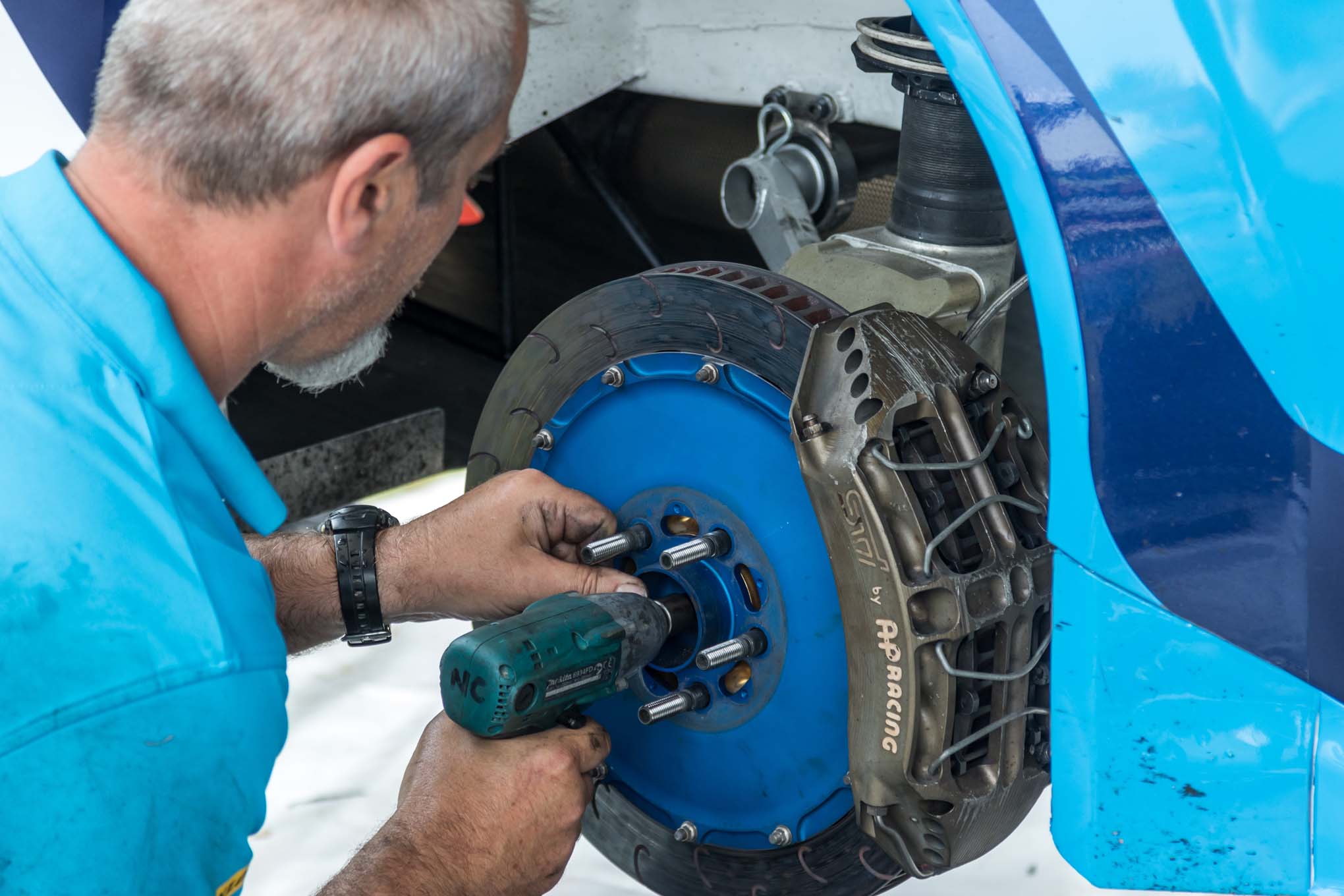 With no arbitrary performance restriction regulations to adhere to, we’re told that the I.O.M. TT Challenge Car is an engineer’s fantasy come to life. Sections of the TT circuit feature dips, bumps, and leaps, and EXE-TC shock absorbers are responsible for softening the blows to the chassis and driver at the average 128.73-mph speed. EXE-TC has a deep background in rallying and rallycrossing.

Part road racer and part rally car, the I.O.M. TT Challenge Car uses dampers with sizeable external reservoirs in the front and rear. (Remember the jumps at high speed.) The front reservoirs are situated within the engine bay and the rears are inside the back of the cabin. The allusion we hear in the paddock is that this Subaru is like a vintage, unlimited Group B car from the 1980s, except with really fantastic, modern suspension. 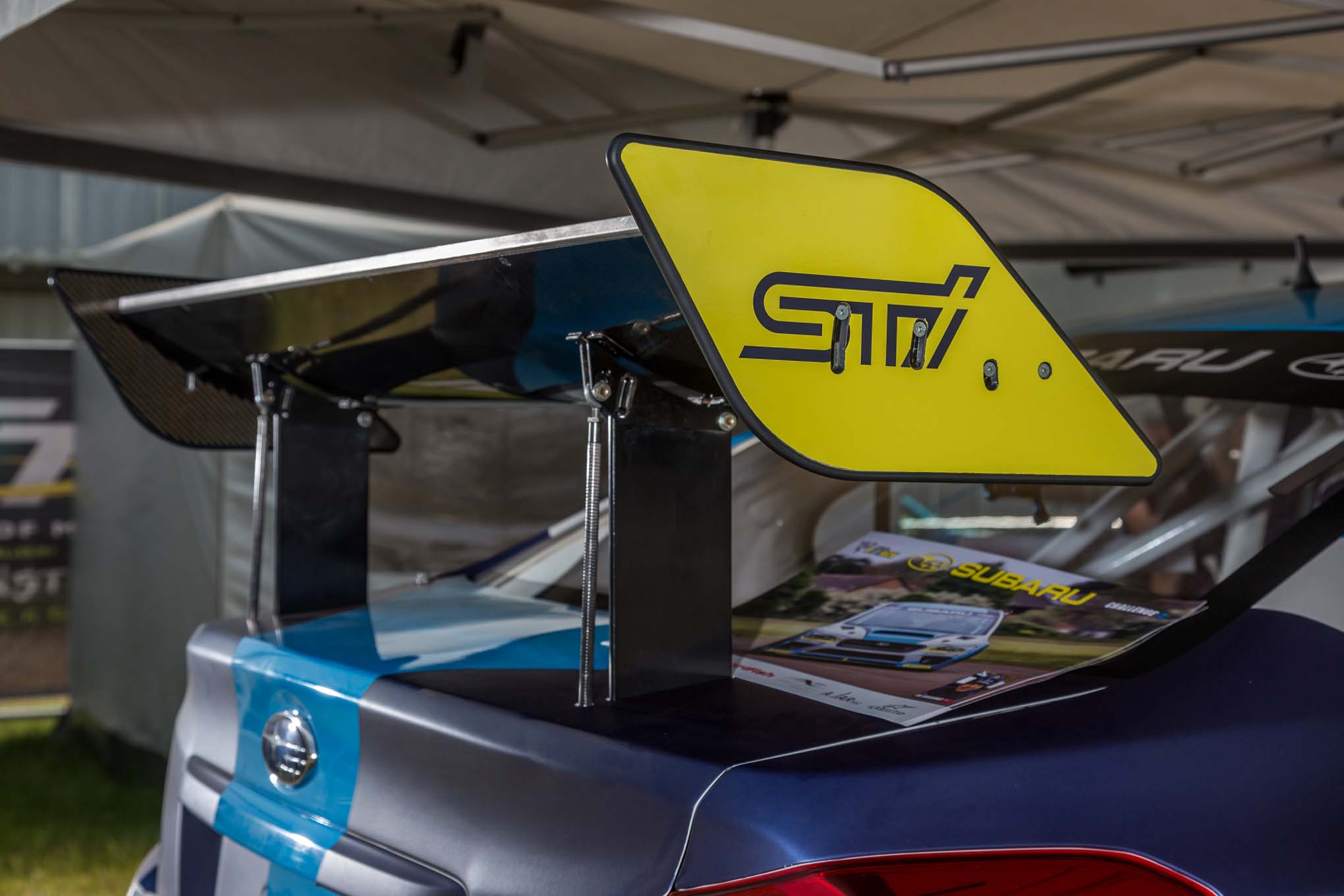 At high speed, tuned aerodynamics makes a big difference. A wood splitter is set up at the front of the car. The rear end is dominated by a carbon-fiber/aluminum rear spoiler that incorporates a moveable element (controlled by a pneumatic pump) to produce a drag reduction system (DRS), the very kind made famous by Formula 1. 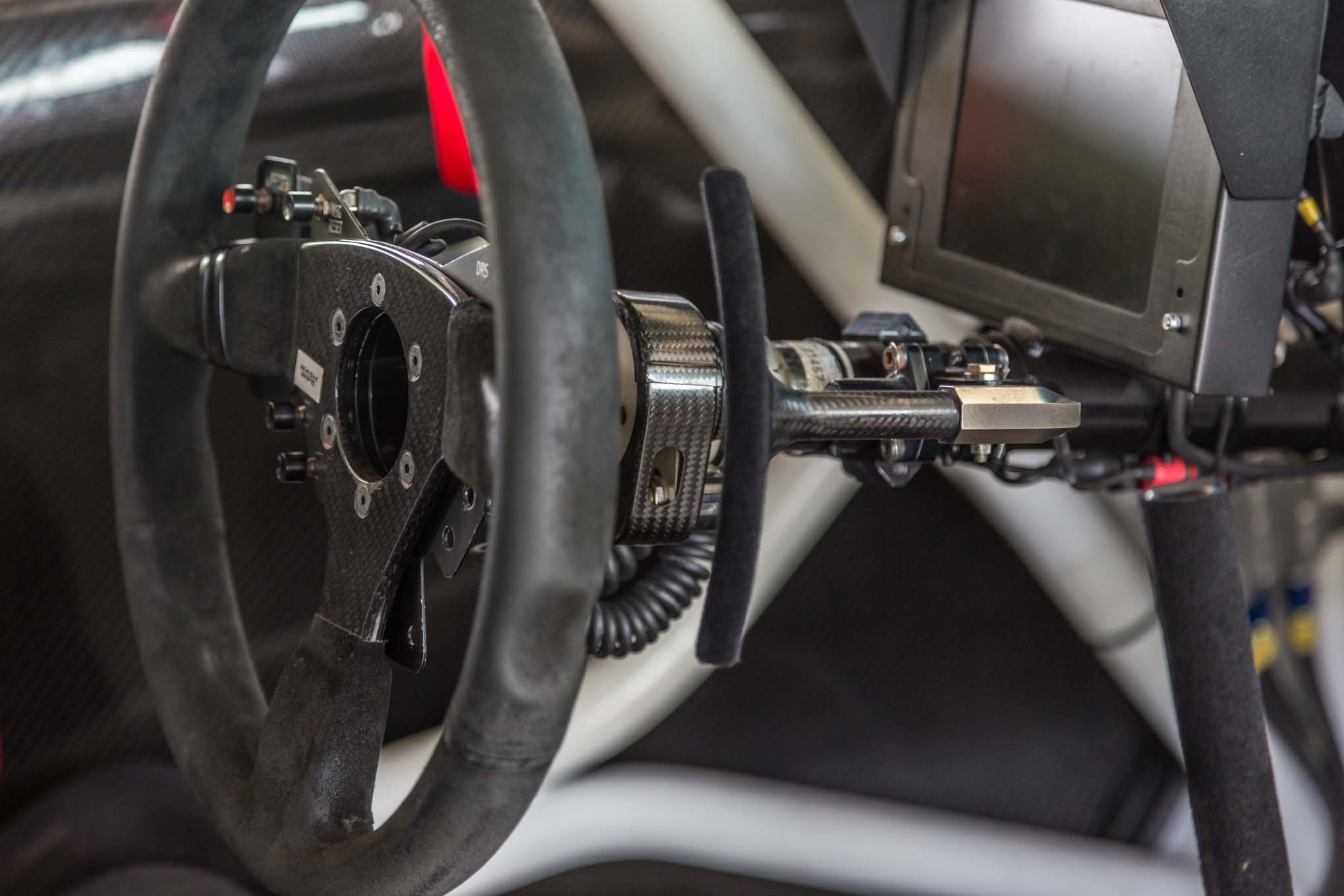 The DRS is activated by Higgins via a switch on the steering wheel and he has to hold it down to allow the air to sail through and stall the wing’s downforce generation. Operating the DRS in real time is a testament to Higgins’ concentration and thumb strength; he wants the wing stalled as often as possible around the fast course but also has to ensure the handling balance — that’s affected by aero — is where he wants it at all times. 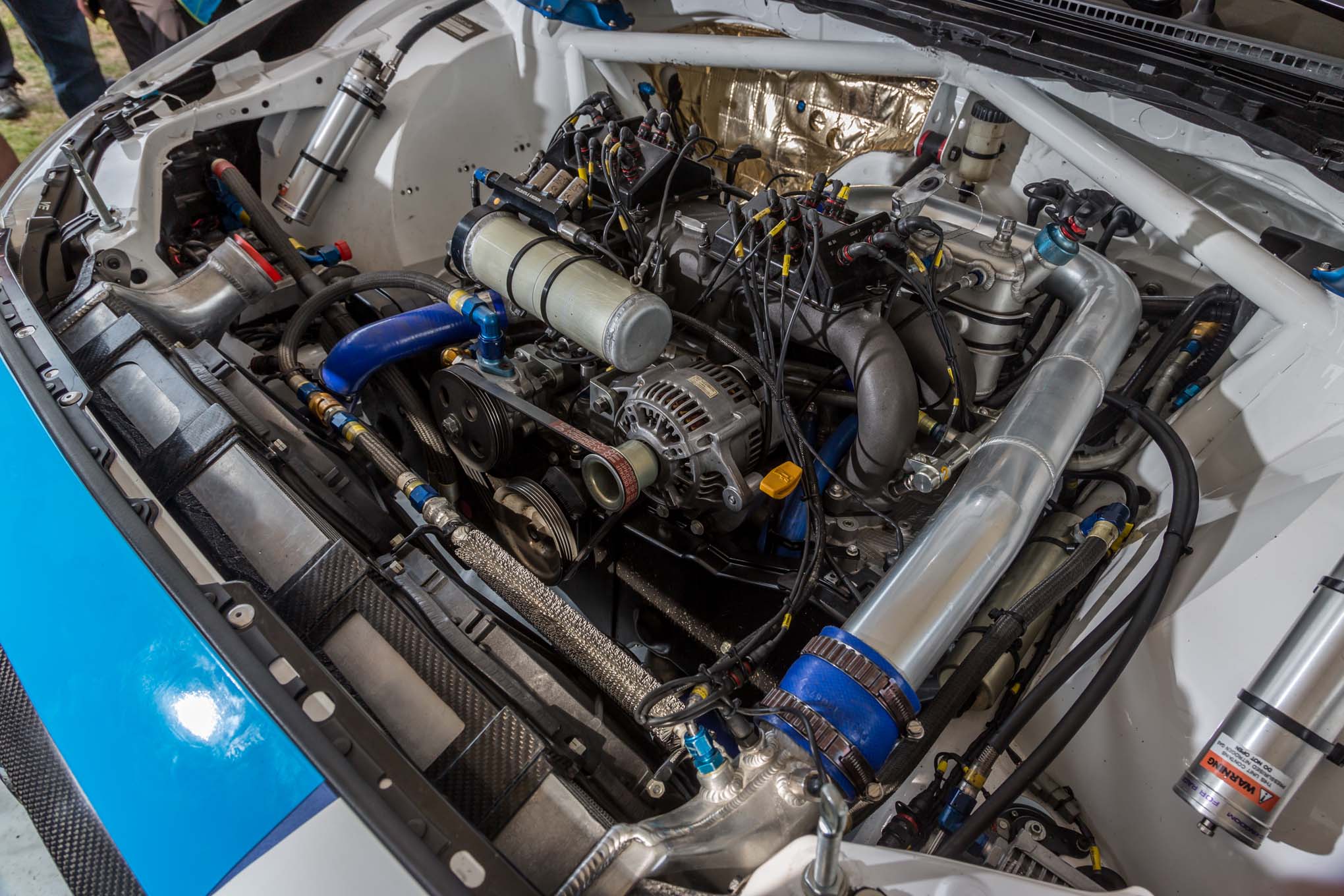 The Prodrive-massaged 2.0-liter flat-four, rated for 600 hp and 590 lb-ft of torque, was run on lower boost and output settings on June 4 and 6 in the interest of mechanical preservation (at an estimated 550 hp instead). Starting with Subaru’s long-running EJ series-based block and heads, everything else, from the turbocharger to the cylinder heads’ gaskets, was modified to form a monster mill. The engine is bolted to a special six-speed semi-automatic paddle-shifted transmission that can only be described as complex and developed specifically for Higgins and the TT’s conditions.

Unfortunately, two planned TT runs that were to take place on Wednesday June 8 and Friday June 10, didn’t get off the ground. With extra chassis tuning and the engine turned all the way up, Subaru anticipated a 130-mph average. 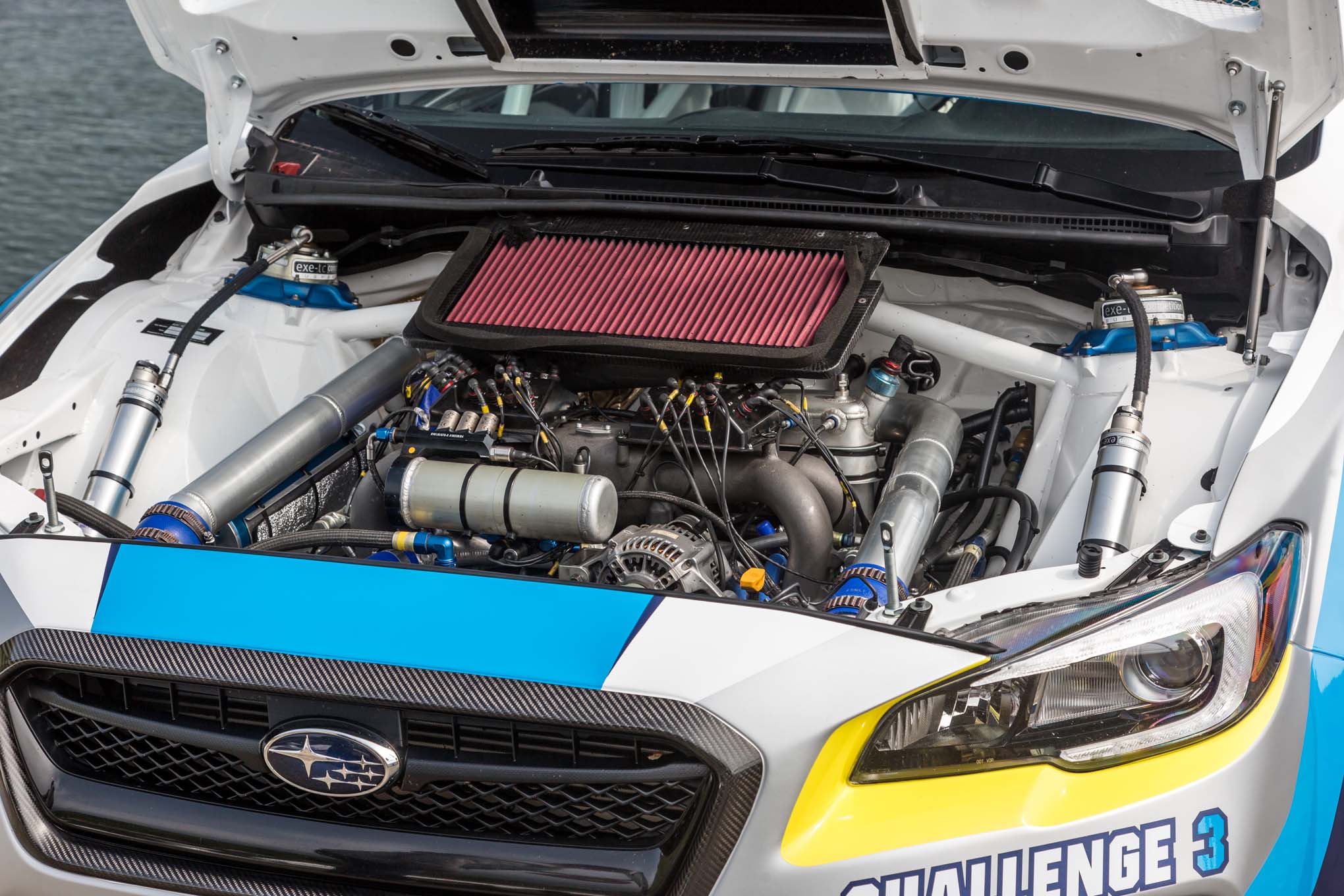 Big engines make big heat. A specially sized intercooler and radiators are tasked with redirecting heat away from critical operating areas. Every little bit counts. For example, the red TT course transponder, originally affixed to the front grille, was moved to the lower right corner inlet to clear a path for the air front and center, after the first run on June 4 revealed that a bit more cooling would be helpful.

Prodrive also poked holes into the part of the factory front grille where it’s a blank piece of plastic. It’s estimated this yields a 5-percent improvement in cooling, which just might be the difference between 129.99 and 130.00 mph. 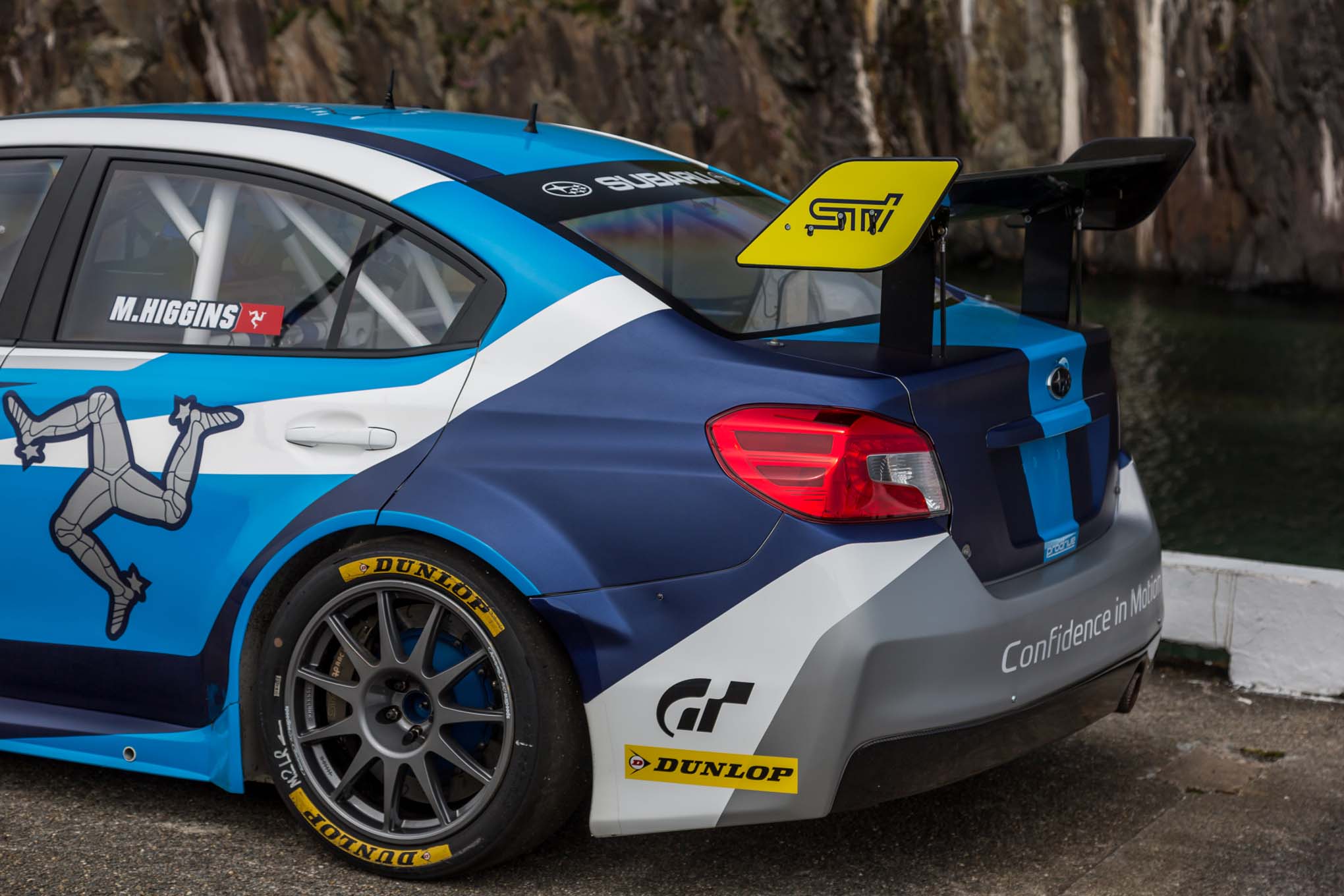 The exterior graphics were applied by the Mercedes Formula 1 team, a neighbor of Prodrive’s (only about 10 miles away).

The I.O.M. TT Challenge Car sees its next action at the 2016 Goodwood Festival of Speed from June 23-26, where Higgins will take the Subaru up Lord March’s famous hill climb.