You are here: Home  /  Auto Tech  /  Cars Brands  /  Italian Car  /  7 Things You Need To Learn After Driving a Lamborghini For a Week
Auto Tech 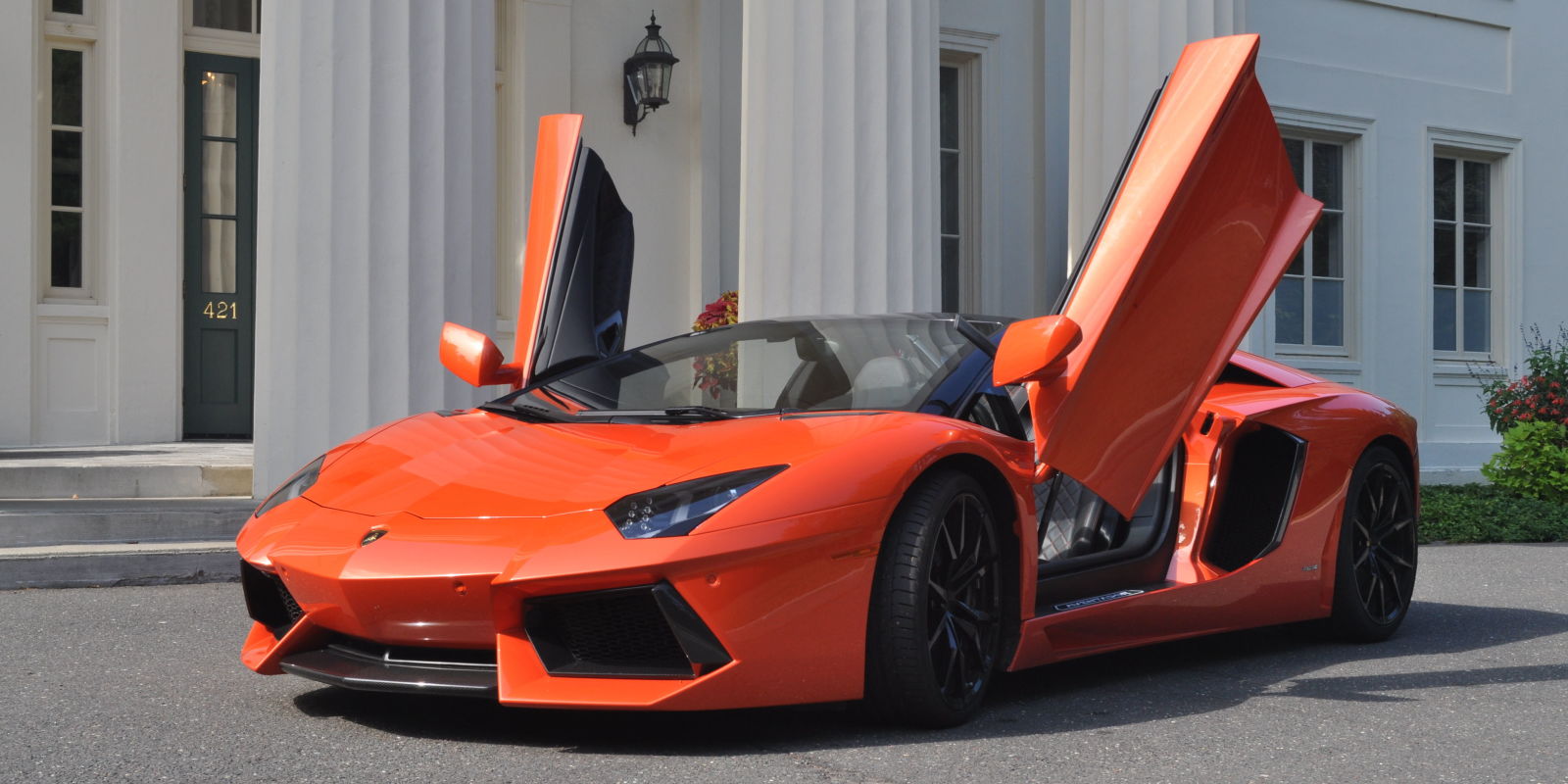 The Aventador, no matter how fast you’ve gone, is Italian. It’s not part of the normal world.  The moment the average human straps into a Lamborghini Aventador, checks all the controls, and hits that first turn off the driveway, their inner Will Smith starts hollering “I’ve got to get me one of these!” Your buddy’s Camaro is quick.

Sightings are rare. But sometimes, a man pulls up to your home with a half-million-dollar Lambo, flips you the key, and says “No charge, see you next week.” For me—a car writer who knows how to ask nicely—it was like that. I drove a flaming orange Aventador LP 700-4 Roadster for seven long days, for more than 900 miles, without anyone pulling me over to say there’d been a huge mistake. This is what I learned.

The V-12 Generates the Best Noise Around

For something with 691 horsepower, the Aventador’s first puffs of premium gasoline are remarkably tempered, even at a cold start. There’s a very long whirrrrr, a mild explosion, and… quiet. That’s Strada mode. Flick it into Sport or Corsa, but be patient. The computer won’t let you rev past 5500 rpm, not until everything’s toasty. At that point, the quad pipes belt out unearthly, heinous noises to everyone within a square mile, a death mixture of tormented brass and banshee wails that’ll send animals to the hills.

Other than at Ferrari or Aston Martin, engine builders don’t assemble naturally-aspirated V-12s like they do at Lamborghini. Full-throttle upshifts to 8500 rpm get dealt like violent blows to the head. Repeatedly, with every snap of the right paddle, the Aventador throws a jab at my skull. Unsuspecting passengers get beat up worse, but afterward they laugh hysterically, whether out of fear or a sudden desire to switch careers and get filthy rich.

You Could Cook a Pizza on the Hood 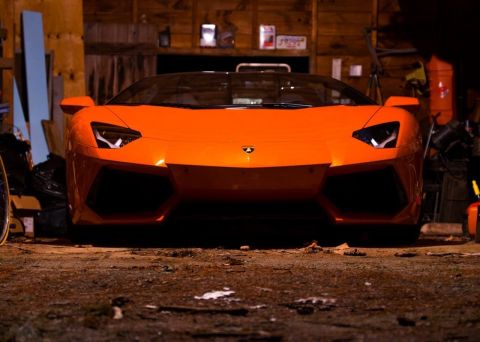 In some high-performance cars, hot exhaust can spit small bluish flames after unburnt fuel alights in the pipes. The Aventador’s pan flash is a bit more extreme. Videos have documented entire cars erupting in flames after their owners revved them in neutral, trying to show off to people gawking on the street. Ferrari and Porsche recalled their cars for engine fires in the past few years. Lamborghini has not. After my first spin to McDonald’s, I consider stowing a fire extinguisher behind the passenger seat.

New Hampshire’s Kancamagus Highway is a parking lot. I’m crawling along amidst the vacationers, the Aventador’s fans are blowing like a Peterbilt under the blinding sun and my gaze is locked on the coolant and oil gauges. They never move. But after an all-day romp, I might as well have parked Elon Musk’s Falcon 9 in my garage. With the door closed, the heat is unbearable. Considering that someday 12-cylinder engines will be banned, excessive heat is a small price to pay for such wicked thrust. Ferrari is turbocharging and downsizing. Lamborghini is not. You can taste the difference. 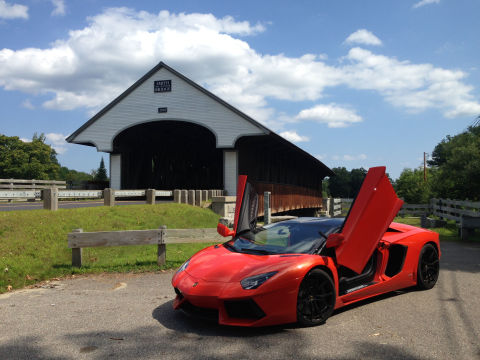 I can’t count how many cars I passed on Route 202, a lonely two-lane road through central Massachusetts. In the Aventador you cannot be expected to buckle up and follow posted limits. You are guilty of speeding as soon as you palm the key fob and turn on those fork-shaped LED headlights. This car isn’t built to do 60 mph. It gets to 60 in less than three seconds on its way to a top speed of 217 mph.

Most other hypercars are either sold-out or impossible to import. That squares the Aventador into a league of exactly one.

Always Be Prepared for Uncomfortable Conversations

Most people in most places in America see a car like the Aventador once in forever. So if you roll into town driving an angry pumpkin, you make friends. I refuel a few miles off Route 9, the fun way to get between Interstates 91 and 93 in southern New Hampshire, and a young guy hops over the pump island to the Lambo. He pushes a CD to my face, covering a toothless smile, and I’m awash with topless women caressing the Confederate flag. It’s his record, and he thinks I’m probably a record executive. 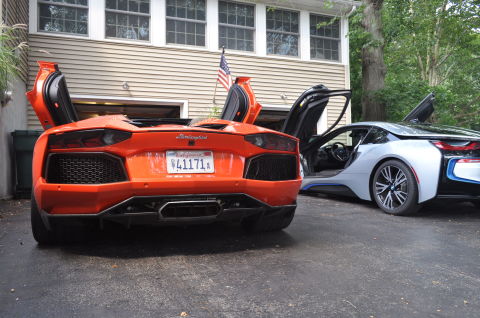 The sight of a Lamborghini somehow allows people to ask personal questions they’d never pose to another stranger (“How much did you pay?” “Your plate is from California, so why are you here?”) Of course, with great power comes great responsibility. Kids listen to the man with the Lambo nagging them to drop the cigarettes and study hard.

Police Will Guard It

Pull up to a packed lot with an Aventador and the attendants will move cones on sight. That’s how Chris Brown parks his Aventador in Los Angeles, and even where I was in Milford—which has an unusually active nightlife for a Connecticut shoreline town—police officers stood guard by the Lambo and blocked traffic on my exit, helping me nose the chin spoiler past the curb. Returning a week later with the BMW i8, I didn’t meet the same reception.

You Really Could Drive It Everyday 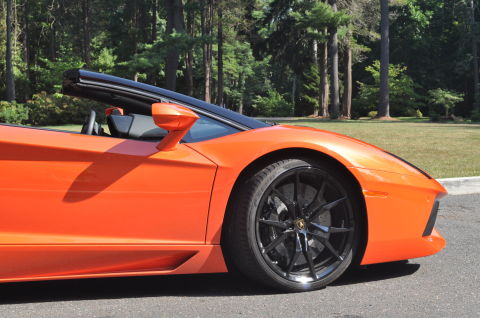 There’s nothing practical about a Lamborghini, it would seem. Because the nose angles downward like the old Concorde upon takeoff, you don’t know when you’ll smash it against the curb. The sight lines and enormous girth require an aircraft marshaller. The seven-speed single-clutch automatic can be lurchy and the air ducts trap loose gravel. But not everything is so painful. The roadster’s two-piece roof is a cinch to install and stow. Even ground clearance is acceptable, thanks to a front hydraulic lift that gifts an extra inch or two. The steering is light. The Audi infotainment controls are simple. There’s even a power rear window to seal the passenger compartment from the V-12’s gulping air intakes and cacophonous valves. I’m not saying you should buy a Lambo as your daily commuter. I’m saying you could.

You Have Peaked and Now Can Age Happily

This is the most expensive and second most-powerful road car I’ve ever driven. The Ferrari 458 Spider (and the updated 488) is my favorite exotic, as its smaller size, nimbler response, and genteel manners make it more roadworthy and less stressful. Yet piloting an Aventador for seven full days was a life-changing experience. Not because the car is a chick magnet (a Lamborghini myth if ever there was one) but for the excessive lifestyle it encourages. 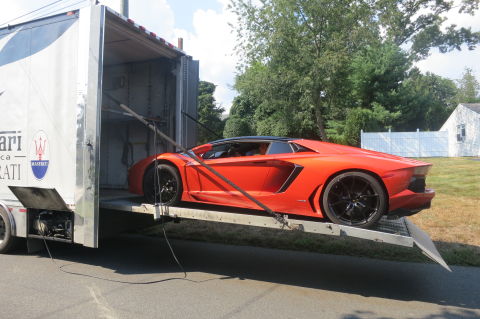 Centuries later, when the last gasoline drop evaporates from earth, will anyone but conspiracy theorists believe such a thing existed? Even now, I’m still shocked it ever happened.