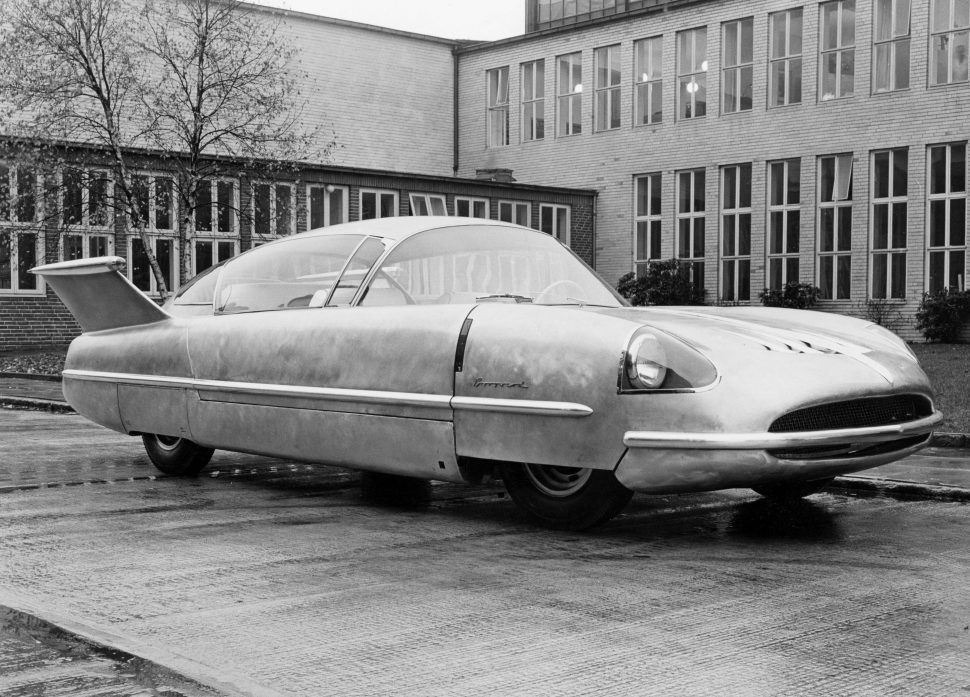 To demonstrate what the future of the automobile might look like, German automaker Borgward challenged its engineers and designers to start with a clean sheet of paper, and the result was the rocket-styled Traumwagen, German for Dream Car.

While 1950s concept cars are typically associated with American automakers, a few European companies were pushing the design and engineering envelope at roughly the same time.

Creating such a vehicle would highlight the engineering capabilities of Borgward, while establishing the brand as a leader in design among German manufacturers. A concept car would also give Borgward engineers, including former Tatra designer Erich Uebelecker, a rolling test bed to try new materials, new engines and new body designs.

From the outset, the Traumwagen was designed with a light alloy body and a streamlined shape, allowing the use of a relatively small engine to produce the desired performance. Uebelacker’s time at Tatra taught him the advantages of the boxer engine, and the Traumwagen was meant to serve as a test mule for a new family of magnesium alloy, horizontally opposed engines ranging from 2.0 to 2.5 liters in displacement.Piaget Replica

These were intended not only for Borgward’s automobiles, but also (in a modular layout) for heavy-duty trucks and even tanks. Plans called for a two-engine truck and a four-engine tank, but given Borgward’s soon-to-be-tenuous financial situation, it’s unlikely these progressed past the drawing board stage. In bench testing, however, the boxer engines proved capable of delivering 100 horsepower from 2.0 liters of displacement, while the 2.5-liter engine was reportedly capable of 130 horsepower, using a pair of carburetors instead of the smaller engine’s manifold fuel injection system.

Construction of the Traumwagen began in 1954, and by March of 1955 the vehicle was being used for engine development and testing. Powered by the larger 2.5-liter four, the Traumwagen routinely took to the roads around the company’s headquarters, with most testing taking place after dark when the roads were less crowded (and perhaps, when less curious onlookers were around).

In August of 1955, shortly before the IAA International Motor Show in Frankfurt, West Germany, the Traumwagen suffered a failure of its disc brake system, resulting in an accident that badly damaged the car’s alloy body. With no time to rebuild the car in advance of the show, Borgward missed an opportunity to showcase its car of the future to European consumers.

The Traumwagen was later rebuilt, with shorter fins and a flip-top bubble that allowed easier entry, but it proved to be too little, too late. When Borgward attempted to sell the one-of-a-kind vehicle in 1962, in the midst of its bankruptcy proceedings, the Dream Car was nowhere to be found, and reports said it had been scrapped by “overzealous company workers.”

Today, Borgward is again producing vehicles, this time the BX7 compact SUV for the Chinese and Indian markets. If all goes as planned, the company expects to branch out to European markets, with a line of hybrid and electric-powered SUVs, in 2017.