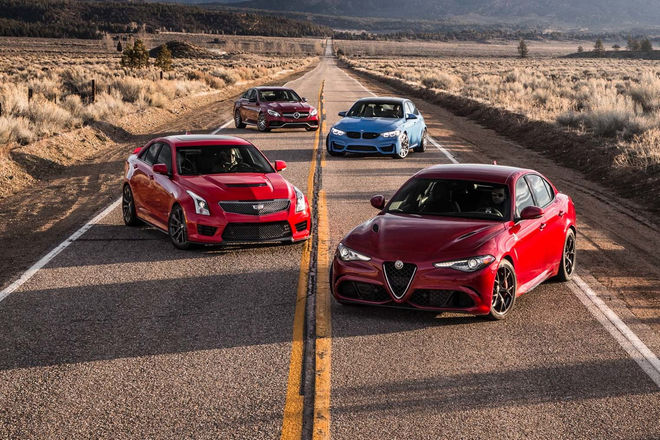 Alfa Romeo Giulia Quadrifoglio, BMW M3 competition package, Cadillac ATS-V, Mercedes-Benz amg C63 is the beginning of the year is the year of the years. They provide near-supercar level performance, but still easily carry four people and their stuff.

These cars have an extreme impact on both drivers’ heart rate and wallet, let alone those smaller public perception models that produce these high-end variations. These car image-makers-the bars boast the basic form. 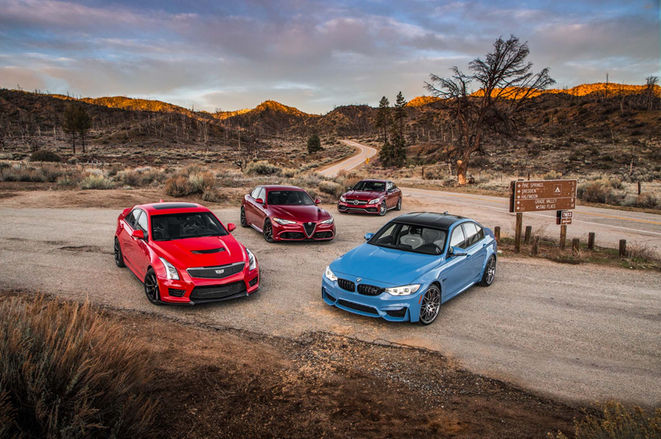 We spent an inordinate amount of time with these four cars, covering hundreds of miles of city roads, back roads, and bombing around two different race tracks. After putting a total of over 3,000 miles on the cars, we have a clear finishing order.

We don’t like putting any magnificent Mercedes in last place. Sadly though, the C-class’ inherent greatness didn’t survive the transformation from excellent luxury sedan to top-flight sport sedan as well as its peers.

The C63’s engine is the sole V-8 here and the most charismatic of the group. On a cold start, the 4.0-liter erupts with a neighbor-startling cough, settling into a labored, loping, baritone idle. You could fall in love with the AMG before even driving it. 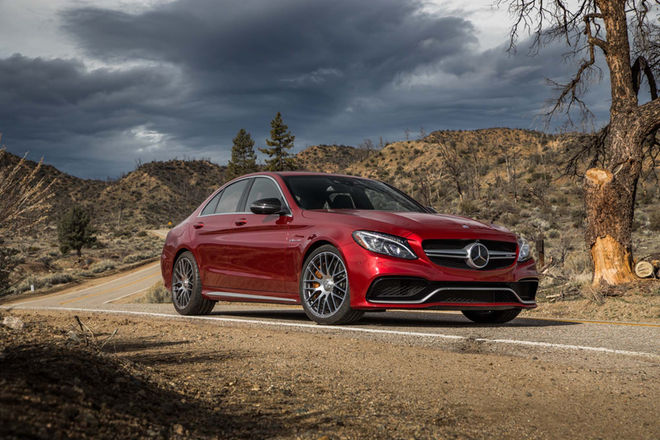 At 503 hp, the V-8’s peak output is a rounding error less than the best-in-class Alfa Romeo’s, but its two extra pistons and 1,091-cc additional displacement help it best the Italian V-6’s maximum twist by 73 very sonorous lb-ft of torque. Although the AMG is almost 150 pounds porkier than the next-heaviest Cadillac, the brute’s underhood muscle put it in the thick of the quarter-mile drag race – and still delivered the best city fuel economy. We are slightly disappointed that for AMG duty Mercedes replaced the torque converter in its seven-speed automatic with a multi-plate clutchpack whose programming allows far too much slippage and not enough smoothness off the line. The torque converter would have been way better.

The AMG is impressive in the corners, beating everything but the Cadillac in our handling tests. Unfortunately, the experience doesn’t back up the numbers—the C63 feels like an unwilling participant in the sport-sedan game. Its steering turns rubbery as the g-forces rise, and its brake pedal becomes less responsive when the carbon-ceramic front (and steel rear) brakes heat up. 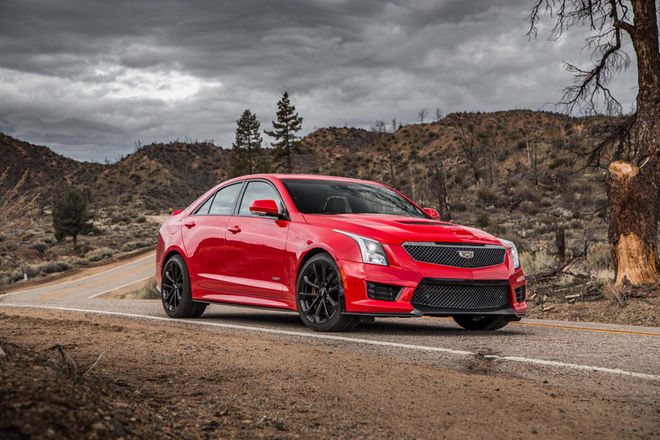 The C63 has, by a considerable margin, the best interior of these four cars in terms of switchgear, buttons, and instruments—or pretty much  anything that falls to hand or is in line of sight. However, in daily use we found the C63’s high-mounted front seats don’t offer much lateral support in return for their firm cushions.

As a device to haul passengers and stuff, the ATS is deeply flawed. Its back seat is unusably small, its ride quality unpleasant, its infotainment system infuriating, GM’s eight-speed automatic is sluggish and occasionally downright harsh, and the cabin is filled with road noise and cheap materials that look pulled from a kit car.

But in terms of handling, this Cadillac is in a class of one. The ATS-V drives as though guided by the god of chassis balance. It never has a problem putting its prodigious power to the ground, and it remains beautifully neutral into, through, and out of a corner. The V is so adept at making use of all four tires’ available grip that I was forced to invent a new word to describe its dynamic magic: Dynamagic.

The recipe behind Dynamagic is the triumvirate of an electronically locking rear differential, magnetorheological shock absorbers, and Performance Traction Management—GM’s performance-enhancing stability control. You don’t feel any of the systems working, but you know they must be. When you reach the ATS’ cornering limit, its front tires lose grip first. In normal cars, this understeer means the fun is over. In the ATS-V, however, you can simply add more lock to the steering wheel. In response, the car tightens its line. That yaw means the rear wheels are responding to steering inputs at the front. It’s…Dynamagic!

The results are clear: with tires no more aggressive than the other cars’, the ATS-V slaughters its competitors with 1.03 g of steady-state cornering grip and a staggering 23.7-second figure-eight performance. That’s not only 0.3 second quicker than the next-best Mercedes, but the list of supercars the Caddy beats is embarrassingly long.

That handling isn’t enough, however, to ignore the ATS-V’s biggest flaw: its engine. The twin-turbo, 464-hp 3.6-liter V-6 is powerful in all the wrong ways: it’s coarse, unrefined, laggy, and lacking in personality. Pumping in a dozen or so decibels of fake engine noise through the stereo speakers helps, but ultimately it’s the powertrain that holds this Cadillac back. If the ATS-V had the Camaro SS’ pushrod V-8, we could have forgiven a multitude of material and back-seat sins. But it doesn’t, so we can’t.