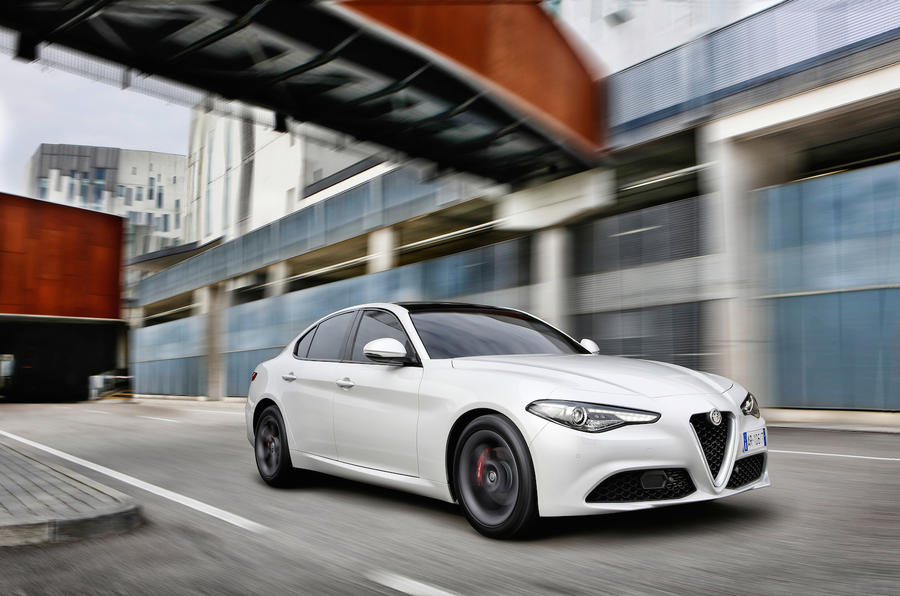 The Alfa Romeo Giulia, in ordinary 2.2 MultiJet 180 Super form is less exciting than the 503bhp Alfa Romeo Giulia Quadrifoglio already tested, but rather more relevant because this 2.2-litre diesel Giulia is the one almost everyone will buy.

It comes to the UK with a choice of 148bhp and 177bhp versions of the same brand new, all-aluminium engine, with a 99g/km, 177bhp Eco version joining the range late summer 2016. As for petrol engines the Giulia can be had with a 197bhp 2.0-litre engine, while the range-topping Quadrifoglio comes with a 2.9-litre Biturbo V6. Curiously UK models will only be available with an eight-speed automatic gearbox.

Senior contributing writerIf you are someone who has always liked the idea of an Alfa saloon, the Giulia is worth a seriously hard look

The standard compact Alfa Romeo saloon will also be available with two trim levels to choose from – Giulia and Super. The entry level Giulia trim will equip the Alfa with 16in alloy wheels, dual-zone climate control, a 6.5in infotainment system, forward collision warning, autonomous emergency braking and lane departure warning. While the Super trim, as fitted to our test car, comes with 17in alloys, extra interior touches and the option to have a leather interior.

No clue is being provided as to what Alfa Romeo will actually charge for it when sales commence this autumn, save the suggestion that it will follow closely the pricing structure of the BMW 3 Series; so expect something in the region of £32,000 to £40,000 according to specification.

Initially the Giulia is quite annoying, progressing upon further acquaintance to really rather encouraging. The irritation stems from a raft of superficially minor issues that still contrive to diminish your enjoyment of the car.

You can’t turn off the stability systems, there’s no such thing as the correct wiper speed in light rain, the hazard lights trigger much too soon under moderate to heavy braking, the temperature in the car at times sometimes seemed to be at significant variance to that displayed on the screen and the sat-nav screen is decidedly low rent compared to what is now found in its BMW and Mercedes rivals. Out there in the real world where cars are lived with as well as driven, this stuff matters.

However, it shouldn’t be allowed to cloud the fundamental fact that this not only the most competitive Alfa Romeo saloon since the last Giulia was launched more than half a century ago but, crucially for anyone with Alfisti blood lurking in their veins, the most likeable, too. The detailing may need some work, but the fundamentals are mainly excellent.

So you start with a flawless driving position (at least for left-hand drive cars) and, at least by compromised modern standards, excellent all round visibility. The engine is noisy at idle and under full load, but otherwise quiet, quieter for sure than equivalents found in the C-Class and Jaguar XE, but probably still behind BMW and Audi. The instruments in their classically hooded binnacles are clear, though not that attractive.

The wheels won’t have completed their first revolution before you notice the ride quality. It is eerily good for this kind of car and not just on smooth Italian roads.

We found some horrendous potholes and goggled not only at the suspension’s talent for absorbing each event, but the structure’s ability to isolate each one within a single corner of the car. The springs feel soft, but superbly damped, the platform itself exceptionally stiff, which is exactly how it should be for this kind of car. I hope these standards have been maintained for right-hand drive production cars.

Cruise around in it and you’ll notice too how little wind noise there is, and how deftly the gearbox interacts with the engine. You might in theory lament the absence of a third pedal, but in reality, I doubt very much that one would materially improve the driving experience.

The acid test for a new Alfa, however, comes in the hills. The good news is that it passes, the bad is that it does so with a merit at best leaving a distinction a distant dream.

On the positive side, the car maintains its ride height beautifully, making it feel poised and stable at all times. The all new electronic power steering disappoints, though; it’s too quick, too aggressive off centre and almost entirely lacking in desirable feedback.

It makes it difficult to feel the front of the car and judge precisely the correct lock required to angle in to a quick curve. This is a shame because the car seems to have a nice balance, gentle understeer appearing to want to flow into equally benign oversteer before a barrage of needlessly early electronic interference unceremoniously shuts down that particular avenue of entertainment.

If you’re bored with the traditional German establishment you might also find there is much to be commended in a Giulia.

Mercedes and BMW offer more complete cars, but they lack the Giulia’s novelty value and, to a certain sort of fashionable, sporting customer, the image too.

Its shortcomings are minor in nature, but sufficient in number for the knowledge of how much better it could have been to irk, but there’s nothing I’d call a deal-breaker here.

In short, if Alfa can get it priced and built properly, I can see this Giulia and the variants it will spawn going some distance to undoing the decades of damage suffered to date by this once fabulous marque. For Alfa Romeo, it will come not one moment too soon.