You are here: Home  /  Auto Tech  /  Tell You All About Lugnuts
Auto Tech 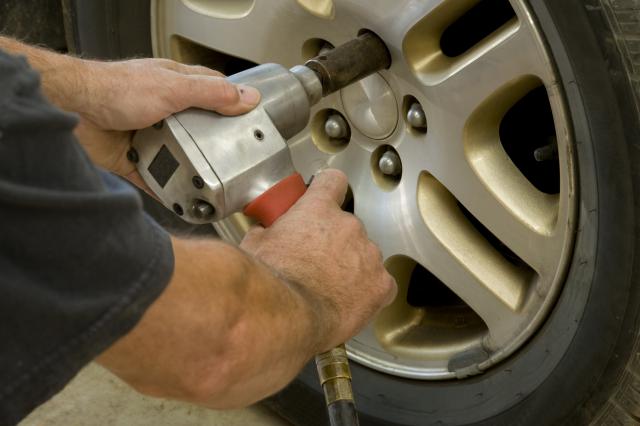 Tell You All About Lugnuts

There is quite a bit of knowledge and technique that goes into dealing correctly with lugnuts and lug bolts. Between the fact that you’re dealing with relatively small parts and extremely large forces and the fact that those small parts are absolutely critical to holding the wheel on the car, that knowledge and technique is quite important, so we’ll start with the crawl-before-you-walk basics. If there’s any one thing tire techs get to deal with more than tires, it’s lugnuts.

I literally become angry whenever I see a tire tech put a lugnut onto a lug stud, give it a half-turn and then “zip” the nut onto the wheel with an impact wrench. I’ve actually fired a tech for being unable to figure out why that’s a bad idea. It’s highly recommended that you give the nut or bolt at least ten turns by hand before ever putting a wrench on it to ensure that no crossthreading has occurred, and that the threads are free of obstructions. I personally advocate tightening nuts all the way down to snug by hand before ever putting a wrench on them.

This ensures not only that the threading is correct and prevents the kind of disastrous damage that an impact wrench can do to obstructed threads, but also ensures that the nuts have centered correctly in the lug holes of the wheel before you apply massive amounts of force to them.

If you’ve spent any time at this job, you already know the “star-pattern” technique of applying torque to one lugnut, then the one directly across from it, but it’s important enough to bear repeating. Torquing the lugnuts in this manner ensures that they will center properly, as long as you have the correct bolt pattern. You torque one nut, then cross the center of the wheel for the next nut, and so on. For a 5-bolt pattern, this will have you torque the nuts in the classic star pattern. For a 4-bolt, it’s a cross pattern. I assure you, as I have assured many tire techs over the years – it really is incredibly important that you do it this way.

For the most part, dealing with lugnuts only involves using the ones that came with the wheels, however changing to different wheels will often require different lugs, and this is where it becomes important to determine that the lugs are the correct type for the wheel.

Flat – There are still enough of these types around to be frustrating. Flat lugnuts have a mounting surface that simply extends out 90 degrees from the lugnut surface like a large washer. Most of these also have a small barrel that extends into the wheel’s lug hole for centering, which is what makes them somewhat tricky to deal with. If the lug is not centered just right, the stem can catch on the flat mounting surface rather than going into the hole, and if you’re not paying attention it can seem as if the lugnut has tightened when in fact it has not. The best way to avoid this is to hand-tighten all the lugnuts to ensure proper fit before applying final torque.

Ball – Ball-style lugnuts are essentially round rather than cone-shaped. Thankfully, there are relatively few of these types left in service, as it can be very difficult to tell them apart from conical styles, and using the wrong type can cause serious and usually irreparable damage to the mating surfaces on the wheel.

Tuner – Many aftermarket wheels are designed for extremely small diameter lugnuts usually known as tuner lugs. In the olden days, tuner lugs were open in the center and designed to accept a solid hex-shaped key for installation and removal. Most are not made this way anymore, as the open design allows a wide-open pathway for air and moisture to get to the studs and threads, causing serious corrosion problems. If you see a set like this, it’s often a good idea to change them out for a set of the newer spline drive lugs.

Spline Drive – These lugs have many narrow grooves on the head, called a spline drive, which will accept a special low-profile key that can just fit over the lugs and into the lug holes. Some people tend to think that spline drive lugs are akin to wheel locks and will make their wheels more secure from possible theft. This is unfortunately not even slightly true. The spline drive key is never a unique pattern, and keys are easily available from any auto parts store. Relying on spline drive lugs for theft protection is no protection at all.

Lug Bolts – While most cars have lug studs coming out from the rotor plate and lugnuts that thread onto them, some cars, particularly BMW, will have lug bolts that thread into holes in the rotor plate. This is a situation that most tire techs have learned to despise, as this means you can’t just hang the wheel assembly on the lug studs while you thread the nuts on. Instead, you must hold the heavy assembly up against the rotor plate while threading the bolts through the wheel and into the rotor, a process that requires approximately 3½ hands and a great deal of cursing.

My tire techs and I developed an easier way. Sit down in front of the rotor plate with your feet just under the car and knees bent. Balance the tire and wheel assembly between both shins, letting it lean back against the rotor. By using your legs as a lever, you can control the height of the wheel assembly and match up the lug holes to the holes in the rotor plate. This leaves both hands free for threading the bolts. There are also fork-shaped tools that are designed to do the same thing, but I have never found them to work nearly as well as a good pair of shins.

Well, thus endeth the sermon. Now get out there and go nuts!