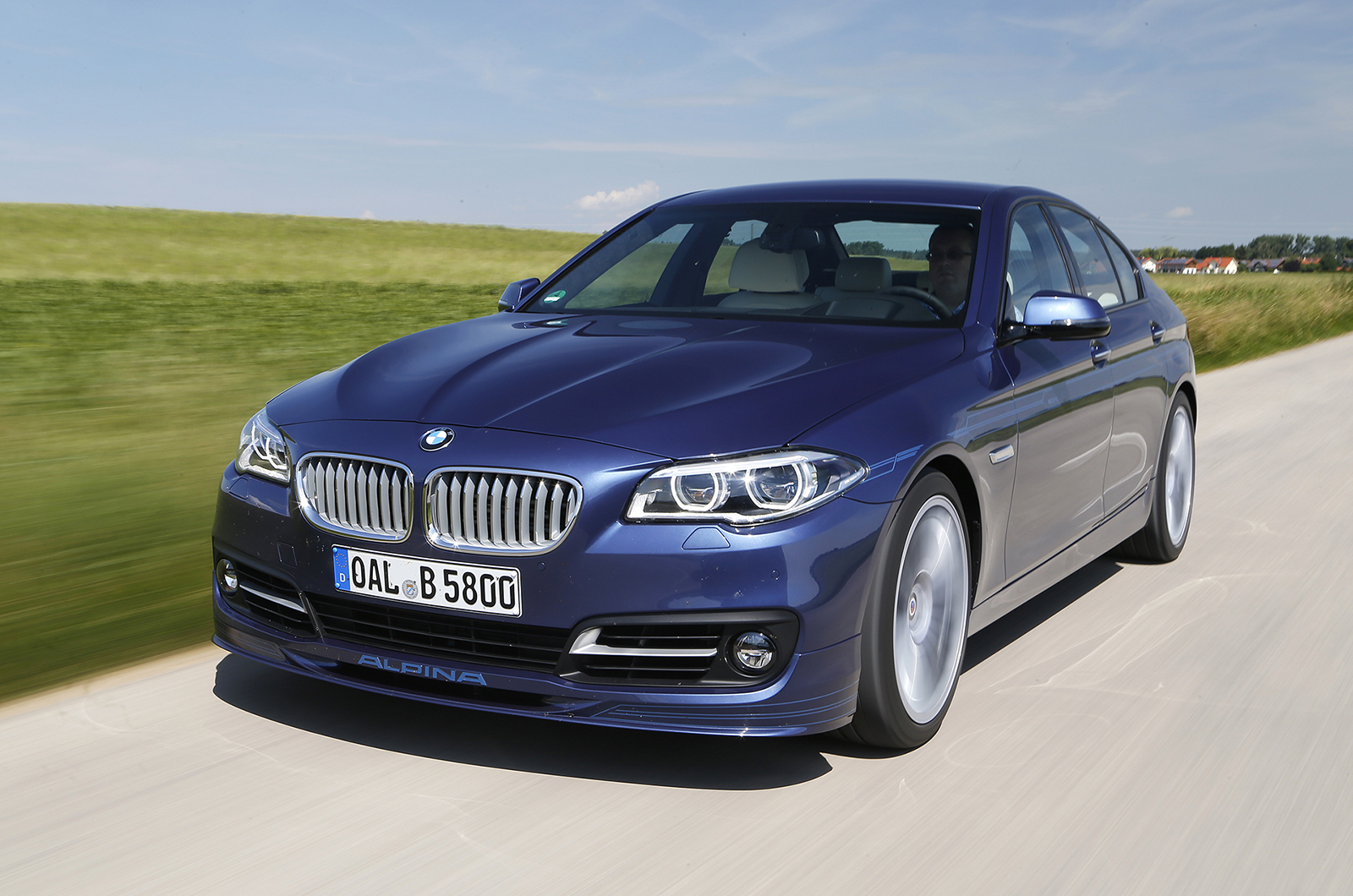 The B5 Edition 50 is Alpina’s birthday present to itself – and to a select band of its customers. Buoyed by its best-ever sales figures – over 1700 units worldwide in 2014 – the family firm of engineers and hand-crafters from Buchloe in Bavaria has ramped up the performance of its take on the BMW 5 Series.

A revised induction system and a higher-capacity fuel pump take the regular B5 Biturbo’s twin-turbocharged 4.4-litre V8 from 532bhp up to 591bhp – and torque, an Alpina specialty, goes up by 52lb ft, to 590lb ft.

The unit is mated, as usual, to a beefed-up, remapped version of the ZF eight-speed automatic transmission that features in countless BMWs. It’s controlled, in the Alpina tradition, by subtle buttons stitched into the back of the steering wheel; paddles are not offered, even as an option.

Beyond the engine mods, the Edition 50 gets a titanium Akrapovic exhaust which brings a slightly louder note and saves 17kg compared with the regular stainless steel unit. There are also forged alloy wheels, which shave off 15.6kg of unsprung mass.

Alpina claims 0-62mph will now take 4.2sec and that the top speed has increased to 204mph – making it the fastest vehicle the company has ever produced. Yet CO2 emissions are a still-respectable 221g/km, thanks to an EU combined economy figure of 29.7mpg.

The numbered production plaque is present and correct, mounted up in the headlining – but Edition 50s also get a dashboard insert personally signed by the company founder, Burkard Bovensiepen. You can also spec Lavallina leather seats with a chequered blue and green finish, harking back to the B7 S Turbo Coupé of the early 1980s.

As with all Alpinas, the B5 Edition 50 goes down the regular BMW production line and is supported by a BMW-backed warranty. This is, in theory, your only chance to buy a B5 for the foreseeable future, since UK importer Sytner no longer sells the conventional 532bhp model.

For starters, this B5 Edition 50 is seriously rapid. The regular B5 never really felt like it had a desperate need for more power or torque, but once you’ve felt the difference it makes in the Edition 50, you’re unlikely to want to hand it back.

Peak torque kicks in at a heady 3500rpm but in truth there’s more than enough below 2000rpm to get you moving quickly. Most of the time you’ll need lightning reflexes and a gentle right foot to keep the B5 anywhere near the speed limit.

The transmission shifts swiftly and smoothly, although it’s intelligent enough to hold a gear and allow jaw-dropping, uninterrupted acceleration if you want. The rate with which the B5 Edition 50 can get from 60mph to 120mph in seventh, for example, is quite astonishing.

It will probably not surprise you to learn that the Edition 50 is supremely capable on the autobahn. On an unrestricted stretch near Alpina’s Buchloe base it felt stable at 175mph and it was still pulling strongly. Slower traffic is likely to intervene long before the engine runs out of puff, we’d say.

The exhaust makes a louder noise if you’re in either of the B5’s more sporting modes, and you can hear deep woofles as you lift off the throttle (from outside the car, they’re actually crackles). It’s not quite as crisp as a Mercedes-AMG rasp, but it has an appealing Nascar-esque thud if you decide to get a lick on.

Equally, in the car’s more comfort-orientated settings the engine is barely audible at all – especially at a fast motorway cruise, where it’s pulling less than 2000rpm at well beyond the UK speed limit.

The ride in Comfort mode is genuinely cosseting, although there’s a fair amount of body roll to go with it. The suspension still feels pretty compliant in the sports modes, too, but while the body control is undeniably tighter, the B5’s weight means that it’s still not that happy about sudden changes of direction.

It can’t quite disguise its bulk or offer involvement in the same way as, say, a Porsche Panamera, and it’s a flaw that’s compounded by steering that’s deliberately light and frustratingly uncommunicative.

Traction is also an issue, regardless of which setting you’re using; the rear tyres do squirm under hard acceleration, to the point where we think it could be a right old handful on a wet, bumpy B-road.

The cabin is little changed from that of the regular B5, but that’s no bad thing. The quality of leathers and materials is superb and you get a fair amount of equipment by BMW standards. Then there’s the level of exclusivity that Alpina offers; many buyers relish taking months to choose and fine-tune their car to their exact specification, thanks to a bespoke trim department, and we can see why they would.

Should you have the wherewithal to buy one, you can’t. Alpina is producing only 50 B5 Edition 50s, split between saloons and Tourings, and the UK allocation of just two cars (yes, really) has already sold out. If you want to sample Alpina’s most outlandish interpretation of the BMW 4.4-litre V8 engine yet, therefore, you’d better speak to UK importer Sytner about the B6 Edition 50, which uses the same powerplant.

As for the B5, even with this most emphatic version, it remains a car better suited to regular autobahn work than British B-roads. It is every inch a landmark car for Alpina – but perhaps just a little too unwieldy for the confines of the UK.