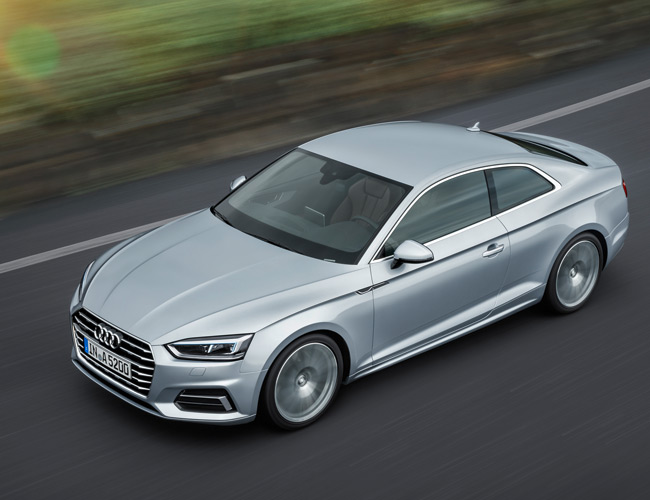 From the looks of it, there haven’t been any radical departures. The car’s silhouette is much the same, with details like the headlights, grille and body lines being sharpened up; the new A5 adheres to Audi’s new, more angular (and angrier) design language. Much like its four-door compatriot, the A5 is about evolutions, not revolutions. Audi’s new A5 is here. It’s been sorely needed — the A5 hasn’t received any major updates since it launched in 2007.

Based on the same MLB “Evo” platform as the A4, the new A5 sheds 132 pounds and has a lower drag coefficient of 0.25, even though it’s larger than before, offering more interior space than its predecessor. With that platform comes a host of new engines. When it launches in Germany, there will be two gasoline and three diesel options (thoughwe wouldn’t hold out much hope for diesels stateside) ranging from 190 to 286 horsepower. Of course, a hotter S5 version will come along too, toting a 354 horsepower twin-turbo V6.

The new A5 will also come with a ton of tech carried over from the A4, including the brand’s lauded “Virtual Cockpit”, a high-resolution virtual display containing all the vehicle’s pertinent information. Other features include Audi’s new Traffic Jam Assistant and other electronic goodies. There have recently been rumblings that a four-door Sportback version of the A5 will be coming to the US too, so be on the lookout for that in the near future, even if the whole four-door coupe trend seems a little ridiculous.