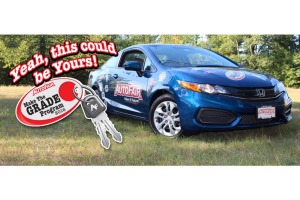 MANCHESTER, New Hampshire — AutoFair Automotive Group  is giving away a new 2015 Honda Civic to a high school honor roll student in its 2016 Make the Grade contest.

The winner, who must be either a junior or senior, will be selected on June 10 at the Northeast Delta Dental Stadium prior to the minor league’s New Hampshire Fisher Cats game.

To enter, students had to bring an original letter of recognition from the local mayor to AutoFair Honda, Ford or Hyundai, give a photocopy to a sales associate and fill out an entry form.

The better the grades, the more entries they were given. If they were on the principal’s list, they received three entries. High honors got them entered twice, while being on the honors list earned a single chance.

The eight-dealership auto group selected 12 finalists randomly in late May through a raffle, awarding each of them an iPad Mini, a Bose portable wireless speaker and a $100 gift card.

The Civic winner will receive all of those prizes as well, but a $250 gift card rather than the $100 one.

“We bring them out on the field before the game with Fisher jerseys that we’ve given them and we have a drawing for the keys,” Jason Lambert, director of marketing, told Edmunds. “Whoever has the key that starts the Civic, wins.”

Lambert said the dealership visits each local school in September, bringing the Civic. He hopes the contest inspires students to work hard all year round.

“This is also a way to connect with the community,” Lambert said.

Edmunds says: This dealership makes the grade with a fun contest.