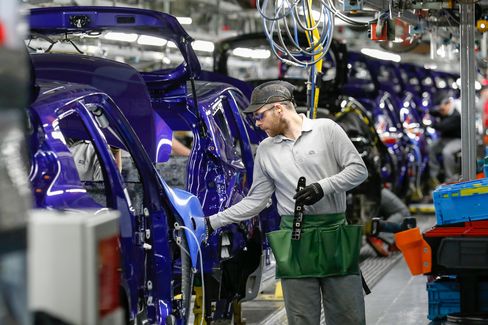 Britain’s Motown Bites the EU Hand Which Helped It Prosper

Last week, in the EU referendum, he cast a ballot to quit. Christopher Shepherd helped build a Nissan Motor Co. factory in Sunderland, England, that thrives on the U.K.’s membership in the European Union.

Shepherd, a 73-year-old retired construction worker, was joined by 61 percent of the electorate in Sunderland, making the gritty city in England’s Northeast a leader of the vote to leave. Sipping a beer in a local pub, Shepherd said he had no regrets.

“TheswisstimesRemain campaign was saying we’re going to crash,” he said. “The Northeast will still survive. There are downsides and upsides, but it’ll grow back.”

Sunderland voters’ nonchalance contrasts with the political, economic and financial market turmoil since the vote, which threatens the city’s driver of growth. Sunderland is the capital of the U.K.’s automotive industry, which has rebounded after decades of decline — thanks in large part to EU membership and investments by companies from overseas, like Nissan.

The Japanese company’s factory makes half a million cars per year, about one-third of the U.K.’s total. More than 70 percent of them are sold elsewhere in the 28-nation bloc. The auto industry’s economic boost has helped Sunderland overcome the loss of its shipbuilding and coal-mining industries and turned the city into a stop for stars like Beyonce, who performed at its Stadium of Light this week as “Leave” voters toasted the referendum results.

U.K. auto production has risen more than 60 percent since 2009, with companies spending more than 8 billion pounds ($10.8 billion) on plants and other investments in the past four years, said David Bailey, a professor of industry at Aston University. The U.K. passed France in 2013 to become Europe’s third-biggest car producer, behind Germany and Spain.

“Being part of the single market has been a key part of attracting investment,” Bailey said. If the U.K. loses membership in the single market, “that’ll have an impact on investment in the U.K., the ability to make new models and to create jobs.”

U.K. companies are urging Prime Minister David Cameron to safeguard access to the tariff-free trade zone, but EU leaders have said the country will have to accept conditions like the continued free movement of labor, which is unpopular with “Leave” campaigners.

A slowdown in the U.K.’s economy is already expected to crimp demand. Car sales in the country will probably drop 15 percent by 2018, LMC Automotive Ltd. estimates. Manufacturers elsewhere in the EU will feel the pain, because the U.K. imports most of the cars sold in the country. Factories across the EU supply parts for U.K. plants.

Ford Motor Co., which employs about 14,000 people at two engine factories and a transmission plant in the U.K., has said it will “take whatever action is needed” to keep its European operations competitive.

U.K.-based luxury carmaker Aston Martin Lagonda Ltd. plans to open a plant in St. Athan in Wales, with production due to start in 2019, adding 750 jobs to the local work force. The plant will produce Aston Martin’s DBX, a crossover sport-utility vehicle.

“The U.K. is our home,” Chief Financial Officer Mark Wilson said in an interview, adding that the immediate impact of the vote will be minimal. “In the longer term, that rather depends on what our politicians agree on. All we can do is urge them to ensure that the trade barriers are minimized and that they do all they can to maintain us as close to the status quo that we have today.”

In Sunderland, the Nissan factory employs 6,700 workers and supports 20,000 more jobs through its supply chain. Nissan workers generate cash for taxi drivers heading to and from the factory and fill nearby pubs after their shifts.

At Nissan’s social club near the factory, on the outskirts of Sunderland, employees were kicking around a soccer ball in an indoor court as rain fell outside. Richard Bateman, an employee at the plant, said he was struggling to grasp why the region voted to leave.

“If a company the size of Nissan went down in this sort of area it would take not just the people who work for Nissan, but the suppliers, the local economy,” he said. “If people are losing money, or fear losing their jobs, they’ll cut back on spending. They’re not going to replace the car or move house.”

Manufacturers in the U.K. could get some relief from a weaker pound. But Nissan, like many other employers, said in advance of the referendum that it preferred a vote to stay in the EU. It hasn’t said anything about the factory since the vote, fueling fears about what could come next for a region that has experienced plenty of economic pain.

While the U.K. has lower labor costs than Germany, its competitive advantage could be undermined by lower productivity, said Jens Nackmayr, a partner at consultancy Roland Berger.

“The manufacturing industry in the U.K. only just started to recover, but the current development risks that the country’s industrial basis will erode,” Nackmayr said in a telephone interview.

The last of Sunderland’s shipyards, once among the largest in the world, closed in 1988. Another traditional driver of North East England’s economy, coal-mining, largely shut down a few years later.

Gary Metcalf, 34, a cab driver, said an annual drop-off in business during Nissan’s two-week summer break shows how integral Nissan is to the local economy.

“If Nissan was to go from Sunderland, it would be as bad as when the shipyards left and the coal-mining stopped,” he said. “That was it for Sunderland.”