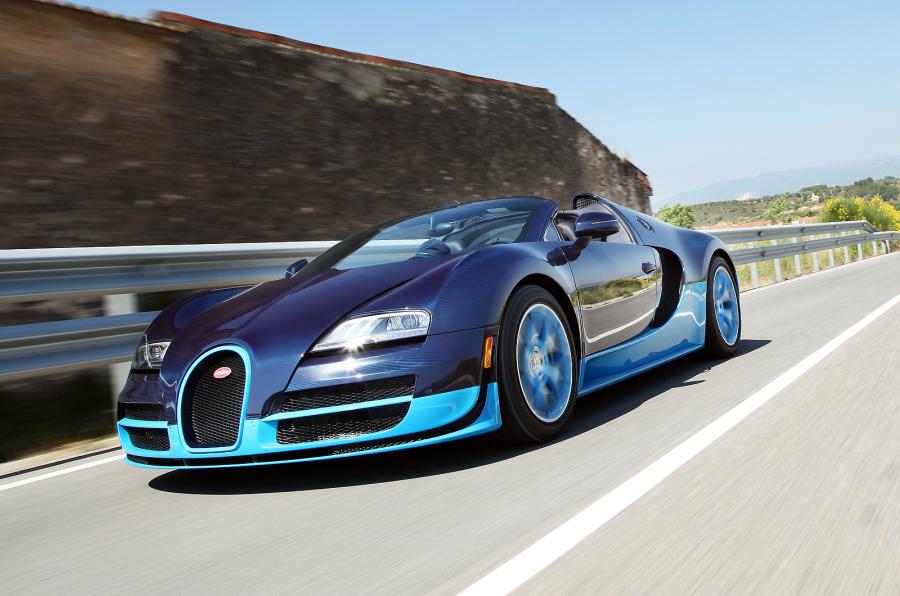 The Bugatti Veyron 16.4 Grand Sport Vitesse is the world’s fastest – and most expensive – open-topped car.

At the heart of this machine, which is priced from a cool £1.4m plus taxes, lies the same 8.0-litre W16 engine, complete with four turbochargers, that can be found in the closed-top Super Sport version of the Veyron.

EditorIf there is a criticism, it’s that the car’s weight, at near two tonnes, is always waiting to catch you out if you do switch the driver aids off

Maximum power of 1183bhp is developed at 6400rpm and torque hits an astonishing 1106lb ft. Mated to a seven-speed, dual-clutch gearbox, drive is delivered to all four wheels by a Haldex system.

Update: Full details of the Veyron’s successor the Bugatti Chiron revealed at the Geneva Motorshow.

At peak acceleration that means it’ll hit 1.4g, about the same force you feel when you slam on the brakes in an everyday car, and 62mph will appear in 2.6sec, 124mph in 7.4sec and 186mph in 16.0sec. It’s worth noting, though, that the 0-62mph time is slower than the standard car’s, as the larger turbos take time to wind up and deliver the extra power and torque. Get them in full swing and, with the space and right road or track you’ll cover a quarter of a mile in 10.0sec and a full mile in 25sec.

However, lest you be lulled into thinking this car is no more than an engineering statisticians dream, let’s leave the numbers there.

Climb aboard and the first thing you notice is that the bucket seats are set reassuringly low and are brilliantly supportive. Look ahead, and your eye is drawn to the exquisite controls and instruments, and especially the centre console, which is made from carbonfibre and titanium.

The engine roars in to life with a pleasant, engaging tone, although it is nowhere near as raw as the numbers may suggest. Roof off, spoiler up, it delivers a note you can always enjoy without it ever feeling like it is intruding. The turbos whoop and woosh rather like you’d imagine an angry dragon too, but never with anything approaching ferocity. Even so, there’s no question it can set the hairs on your neck upwards is you feel inclined to drop a gear or two and go.

That’s a theme that rings true for pretty much the whole experience of driving a Veyron – it is thrilling, but not daunting, encouraging, not overwhelming. Sure, even in ‘normal’ mode (their name for it, not ours – very few people would describe anything about this car as normal) it accelerates on and on if you ask it to (all the too around 235mph before the torque delivery levels out), but although it is undoubtedly very fast, the power and torque are delivered in a largely undramatic way.  Pedal feel under braking, too, is exquisite.

Likewise, the Vitesse never feels like a large car. While its dimensions suggest otherwise, the supremely accurate steering gives you the confidence to thread it down twisty roads just as you would any other car, while the refinement, even roof down but with the front and rear deflectors in place, cossets you from everything but tyre roar on bad road surfaces, which not even the VW Group’s finest engineers have managed to fully tame.

If chopping the roof off has introduced any ride or handling compromises, they’re not evident. The Vitesse’s extra weight and removable roof over the Supersport mean that the spring, damper and anti-roll bar rates have all been altered, but it still rides with the firm precision of a mid-engined supercar, and remains supple even if you up the speed. No, we didn’t try it in full-blown track mode on anything other than a high-speed bowl, but we went as fast as most mortals would dare.

The Vitesse has a natural tendency to understeer that can be neutered by trailing the throttle into bends, but if you go that route you need to do so with discipline.

If you have the cash to spend and the merest hint of an inclination, then yes – but don’t dilly-dally too long as only 150 open-topped versions of the Veyron will be built, in either ‘standard’ Grand Sport spec or this Vitesse version, and the waiting list is currently over a year long.

So far 69 have been sold, six of which are Vitesse models, and the demand is only likely to increase as the car garners rave reviews such as this and the mega-rich realise there’s an opportunity to push automotive boundaries further (and acquire bragging rights, no doubt).

Just as people buy deep-sea watches that will never see the depths or employ architects to design houses that are more than mere dormitories, so the Bugatti Veyron 16.4 Grand Sport Vitesse should be considered a masterpiece that, while not necessary nor even likely to be used to its full potential, is something we should all be grateful exists.