I still have that Texas Special F3, complete with scratches from running over hundreds of little green army men through the years, however my collection now includes more than what came in that big box, which he purchased at the Firestone Tire Store on Atlantic Avenue in Brooklyn, New York. Ever since the 1950s when my father bought us a Lionel train set I’ve been hooked on toy trains.

Combining my love of cars with that of toy trains, I now collect any rolling stock that is automobile-related. From double-stack car transports to flatbeds, if there are automobiles or trucks on them, I’ll probably buy it. My favorite trains to collect are boxcars, so when Lionel introduced this blue boxcar to commemorate Buick’s centennial, I just had to have it. 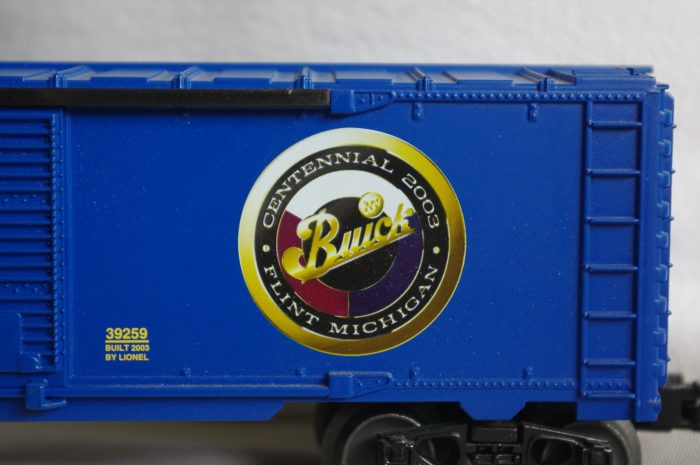 To coincide with Buick’s 100th Anniversary, Lionel produced this boxcar in 2003, which is date-stamped on the side by the opening door; it reads “39259 BUILT 2003 BY LIONEL.” Buick’s early script logo is printed on the left side, with their centennial logo on the right. Other than that this is a standard O-27 gauge boxcar with spring trucks, which is very similar in appearance to the classic 6464-series boxcars that were produced back in the ’50s and ’60s. Although long out of stock, I’ve seen a few used examples on the internet with prices starting at around $50 each, with their original box. Happy hunting!