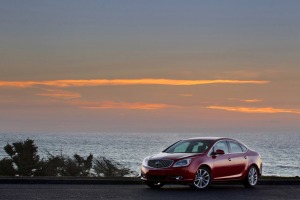 The Verano “will be phased out in North America following a short 2017 model year run ending in October 2016,” wrote Buick spokesman Stuart Fowle in response to a query from Edmunds. “The decision underscores the changing consumer market dynamics where there is a growing demand for SUVs in North America.”

DETROIT — The Buick Verano compact luxury sedan will come to the end of the line this fall, General Motors confirmed late last week.

On sale now at Buick dealerships, the Verano competes against the Acura ILX, Audi A3 and Mercedes-Benz CLA-Class sedans.

Consumers have been turning away from sedans in favor of crossovers and SUVs in what some analysts have described as a “sedan recession.” The trend is spurred by low gasoline prices and improved fuel economy in those larger vehicles.

Car shoppers increasingly are drawn to the SUVs in the Buick lineup, including the Buick Encore subcompact SUV, which is the brand’s top seller. Other Buick SUVs include the Buick Enclave and Buick Envision.

Although it’s based on the Chevrolet Cruze, the entry-level Verano is bolstered with more than a few key upgrades and is positioned above such vehicles as the Honda Civic and Ford Focus.

The Verano is a good example of Buick’s efforts to produce more modern and engaging vehicles that maintain the style, comfortable ride and quiet cabin expected of the brand, Edmunds’ reviewers noted.

Edmunds says: Car shoppers still in the market for a sedan will be able to find a good supply of Buick Veranos at dealerships through the fall.