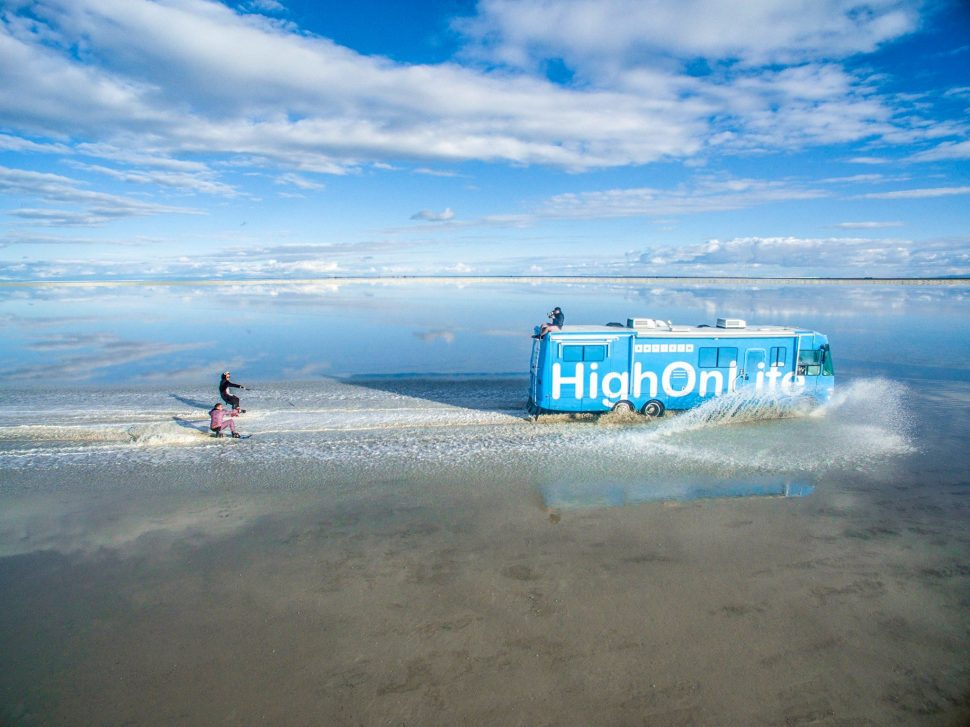 A group of Canadians who caused outrage last month after entering restricted spaces at Yellowstone have come under fire again after a stunt of theirs – posted to social media – left the Bonneville Salt Flats damaged.

The stunt, which involved members of the High on Life SundayFundayz group wakeboarding behind a six-wheeled RV on the flooded salt flats, took place in March, according to time stamps on photos uploaded to the group’s Facebook page. An accompanying video later appeared on the group’s Twitter feed and on Vine and asked viewers whether they’d try something similar.

Four members of the group – on a cross-country road trip to promote a Vancouver-based clothing brand – were later spotted by tourists and on their own social media channels leaving a designated boardwalk to get close-up shots of themselves at Yellowstone’s Grand Prismatic Spring. The U.S. attorney’s office in Cheyenne, Wyoming, issued arrest warrants for the four – Charles Ryker Gamble, Alexey Andriyovych Lyakh, Justis Cooper Price-Brown, and Hamish McNab Campbell Cross, who have all since apparently finished their road trip and returned to Canada – though according to an Associated Press report, authorities won’t attempt to extradite the four because their crimes were misdemeanors.

As Bureau of Land Management spokesperson Lisa Reid told the Salt Lake Tribune, driving on the salt flats when standing water is present is prohibited. As a result, the BLM has opened an investigation into the group, though Reid couldn’t say for sure what charges, if any, should be filed for the stunt.

The Bonneville Salt Flats, which regularly flood in the winter and spring and then dry out throughout the summer and fall, was added to the National Register of Historic Places in 1975 and designated an Area of Critical Environmental Concern in 1985. The latter designation came after decades of observation of the salt flats’ thinning salt surface, a situation which factored into the cancellation of the last two Bonneville Speed Weeks and which led the Utah legislature to call on the BLM to restore the salt flats to racing conditions. BLM officials have promised to study the cause of the thinning and shrinking salt flats.

As pointed out in the Salt Lake Tribune article, as many as 50 cars a day venture onto the flooded salt flats during the off-season, something that researchers said could also factor in to the decline of the salt flats. Driving on the softer parts of the flats can also lead to stuck vehicles and the high towing bills that follow.