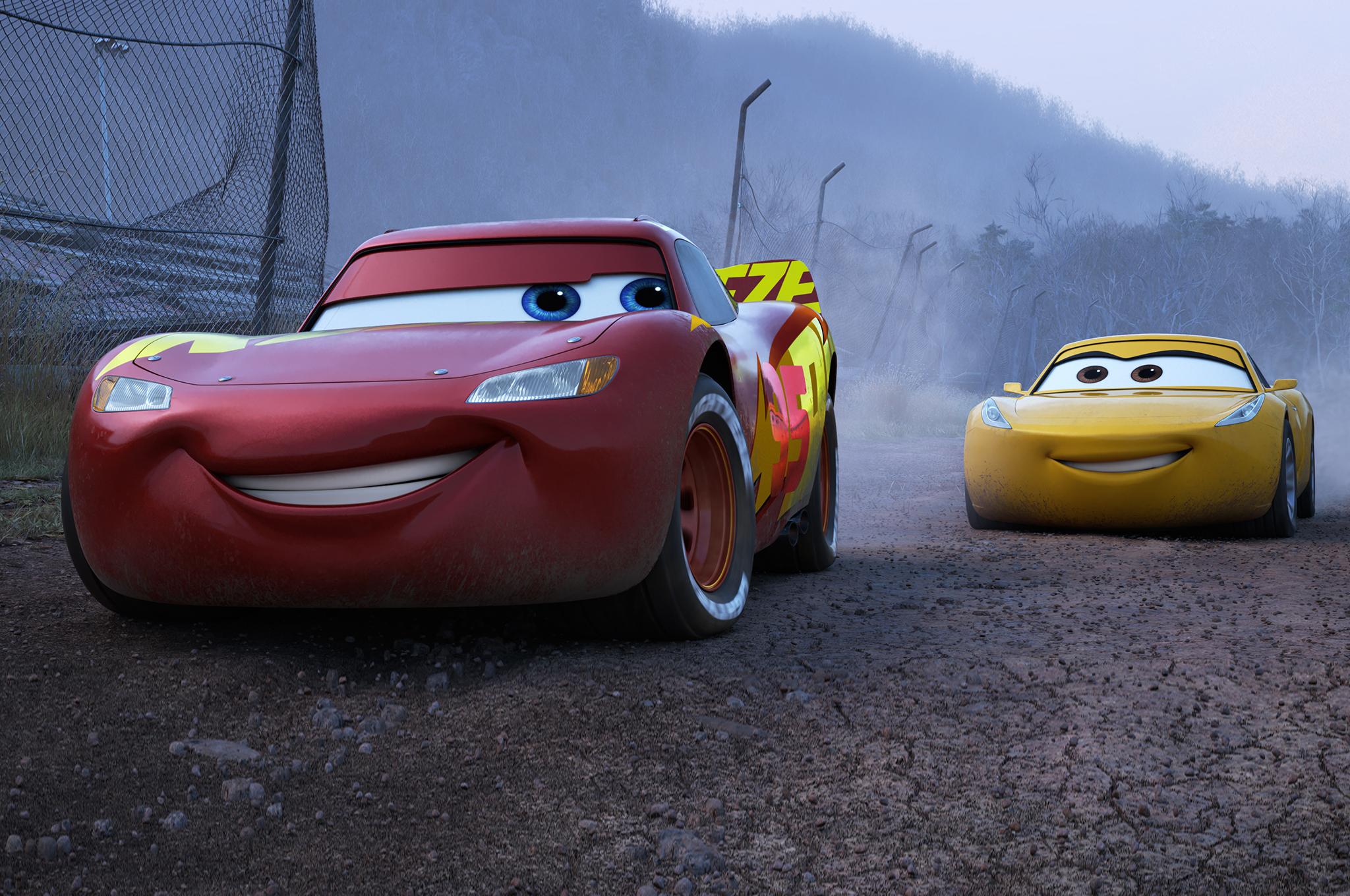 Cars 3 is the sequel the original Cars from 2006 deserved. The film brings the franchise back to its racing roots and takes you on a fun, emotional ride that can be enjoyed by viewers both young and old.

We can’t start this review without first acknowledging the existence of 2011’s Cars 2. That film took the series in a different, James Bond–influenced direction that relegated the protagonist of the first movie, Lightning McQueen (voiced by Owen Wilson), to a supporting role. It felt more like a feature-length side story than a true sequel to the film that wrapped gearhead culture, Route 66 Americana, and racing history together in a fun, animated adventure involving talking cars. Cars 2 also happens to be the only Pixar film so far that’s garnered a “rotten” score on Rotten Tomatoes. Luckily, Cars 3 doesn’t require any knowledge of the second movie to enjoy, so we recommend just skipping straight from 1 to 3.

Cars 3 puts McQueen back in the spotlight, and the film acknowledges the more than 10 years that have passed between the first and third movies. Lightning McQueen is now the elder statesman of the Piston Cup racing series but still one of the fastest at the beginning of the film. That doesn’t last long, however. A rookie named Jackson Storm (Armie Hammer) comes along and quickly moves to the front of the pack. Storm is one of the “next-gen racers” that enter the series and displace McQueen’s friends. It’s at this point that the film starts to feel a lot like the original; McQueen must once again train to defeat his rival. 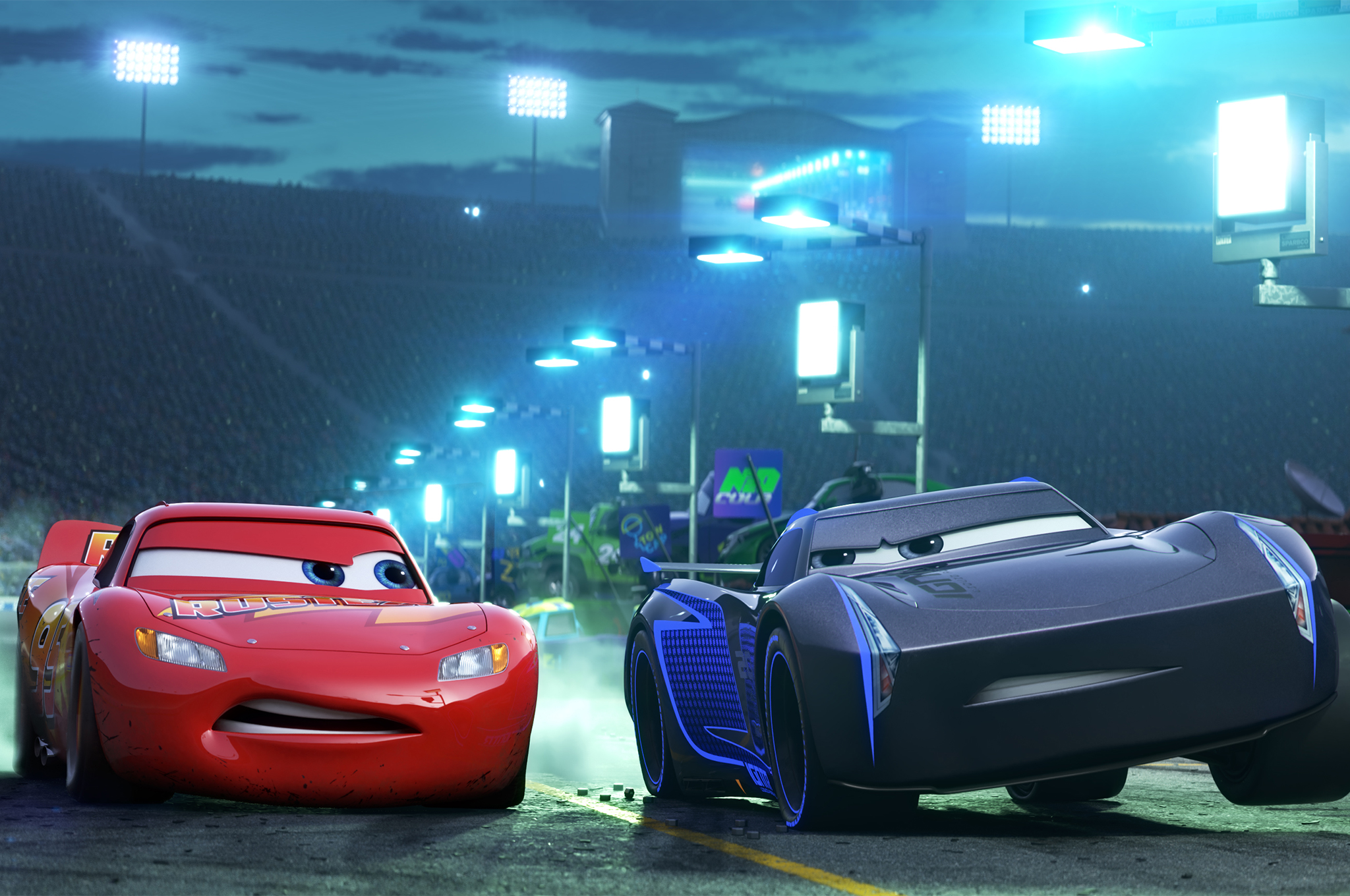 Aging is a prominent theme throughout the movie, and the old man jokes really start to pile on when we meet Cruz Ramirez (Cristela Alonzo), the enthusiastic, sports car–bodied trainer assigned to whip McQueen back into shape. The scenes that follow are comical and lighthearted, but they also begin building a relationship between the two characters. But not a romantic one, if that’s what you’re thinking. McQueen and Sally (the blue Porsche 996 voiced by Bonnie Hunt) are still together.

Many of the beloved characters from the original film return with their original voices for the third installment, including Tow Mater (Larry the Cable Guy), Flo (Jennifer Lewis), Ramone (Cheech Marin), Luigi (Tony Shalhoub), Sarge (Paul Dooley), Mack (John Ratzenberger), and many more. A few characters return with different voice actors, but not Doc Hudson, who was voiced by the late, great Paul Newman. McQueen’s mentor makes appearances in flashbacks, using what could be unused dialogue recorded by Newman for the first film. No matter how they pulled it off, hearing the actor turned race car driver on screen again might jerk a few tears.

Just as Luke Skywalker sought out Yoda to complete his training in The Empire Strikes Back, McQueen goes in search of Doc’s old crew chief, Smokey (Chris Cooper), a character inspired by the real-life Henry “Smokey” Yunick, a famous NASCAR racer, mechanic, and team owner of the 1950s. Anyone enamored with stock car racing history will love this part of the film because it’s full of references to NASCAR’s glory days. Several characters are inspired by real-life NASCAR heroes. Junior “Midnight” Moon is an old-timer who’s both inspired and voiced by NASCAR legend Robert Glenn “Junior” Johnson, and Louise “Barnstormer” Nash is voiced by Margo Martindale and inspired by Louise Smith, a female NASCAR driver who refused to watch from the bleachers and went on to win 38 races from 1949 to 1956. River Scott (Isiah Whitlock Jr.) was inspired by Wendell Scott, the first African-American NASCAR driver and the first to win a Grand National championship.

The end of the film is an emotional roller coaster that revisits all the themes of the movie—fear of aging, believing in yourself, passing the torch, etc.—and brings things full circle. We don’t want to spoil too much, so just go see it for yourself. True to Pixar fashion, the movie is loaded with cameos and Easter eggs, so keep an ear out for some familiar voices and fun car references.