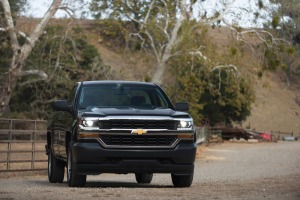 “We’ve put together a package of offers that will get consumers excited,” GM spokesman Jim Cain told Edmunds on Friday. “The dealers have every tool they need to help match people with the right vehicle and the right offer.”

DETROIT — Chevrolet is luring car shoppers into showrooms in June with multiple promotions for a wide range of vehicles, including the 2016 Chevrolet Silverado, Chevrolet Impala and Chevrolet Corvette Stingray.

Chevrolet is running a Truck Month promotion that offers zero percent financing for 60 months, plus up to $8,250 in cash on some vehicles, including the 2016 Silverado 1500 Crew Cab LT 4WD.

The Silverado competes against the Ford F-150, Nissan Titan, Ram 1500 and Toyota Tundra.

“Sometimes when you have a variety of different offers, it can get a little overwhelming for consumers,” Cain said. “Having a really simple message like 20 percent off MSRP cuts through the clutter and it’s a customer-friendly sales promotion.”

Chevrolet.com is advertising a 2016 Impala LTZ for 20 percent off MSRP, making it more competitive against such rivals as the Ford Taurus, Kia Cadenza and Toyota Avalon.

GM is offering the zero percent financing for 60 months and a $2,250 cash allowance on most versions of the 2016 Chevrolet Equinox SUV.

Current owners and lessees of the Chevrolet Corvette can take advantage of a new June deal on the 2016 Corvette Stingray that offers $2,000 in loyalty cash.

“There’s some kind of offer on just about everything,” Cain said. “It varies by vehicle and region of the country. The best thing is to check Chevy.com or visit a Chevy dealer.”

The aggressive incentive program at Chevrolet is in response to lackluster May sales. GM sales dipped 18 percent last month.

Car shoppers can expect more incentives from other automakers this month, according to Jessica Caldwell, Edmunds.com director of industry analysis.

“The summer months will flush out more incentives from automakers,” Caldwell said.

Edmunds says: Car shoppers have lots of good reasons to pay a visit to their local Chevrolet dealer this month.

Used Electric Cars: About To Get Big, What You Need To Know
Tag 2016 Chevrolet Silverado Chevrolet Corvette Stingray Chevrolet Impala