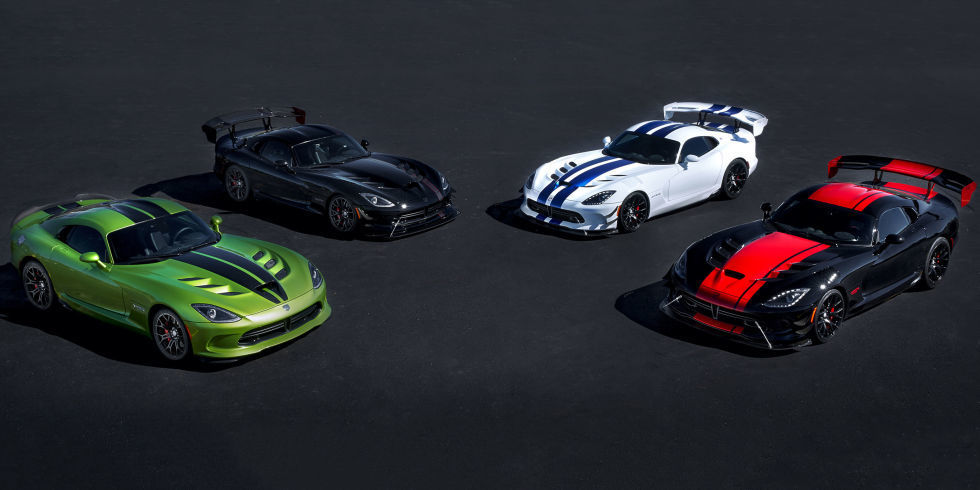 Twenty-five years after it first went into production, the Dodge Viper’s tenure comes to an end, with five commemorative special editions celebrating a quarter-century of the American V10-powered brute.  The long-anticipated death of the snake is upon us.

We expected there would be at least one last-hurrah special Viper, but Dodge is building four. The Viper 1:28 Edition ACR (shown above in black with red stripes) commemorates Randy Pobst’s astounding 1:28.65 lap of Mazda Raceway Laguna Seca, a time that shattered the previous record set by a Porsche 918 Spyder. Fitted with all the optional go-fast equipment available, including the Extreme Aero Package and carbon ceramic brakes, the 1:28 Edition mimics the Viper ACR 1:33 Edition produced in 2010. Up to 28 examples will be built.

The Viper VooDoo IIReplica Cartier Watches Edition ACR is the all-black ACR shown above. With the same graphite racing stripe as the 2010 VooDoo Edition, only 31 of this color package will be built.

Unlike the previous three, the Viper Snakeskin Edition GTC is based on the touring edition of the Viper, not the all-out track-focused ACR. Painted in Snakeskin green with a special contrasting snakeskin-patterned SRT stripe, it’s meant to highlight the fact that the Viper is literally named after a venomous snake. Once again, it takes inspiration from a nearly-identical special edition from 2010. Twenty-five examples will be built.

The fifth special edition, the Dealer Edition ACR, is only available through Dodge’s highest sales volume Viper dealers, Tomball Dodge of Tomball, Texas, and Roanoke Dodge of Roanoke, Illinois. Not shown above, it’s painted white with a blue center stripe and red driver’s stripe, with all the fastest ACR bits. This one’s limited to 33 examples.

We’ve known that the Viper couldn’t survive forever—parent company Fiat Chrysler simply can’t funnel resources toward an expensive and slow-selling sports car with an 8.4-liter engine when everyone else is scrambling to boost fuel economy and offer a crossover for every variety of commute. But we’ll miss the steadfastly old-school Viper. In a world of increasingly user-friendly, daily-driveable supercars, the Viper has always been a brash, demanding brute. In a way, that makes it the last truly American car.

Of course, if FCA CEO Sergio Marchionne has his way, the Viper won’t stay dead forever. We always knew we liked that guy.

The $5,000 Challenge, just in time for Father’s Day edition now