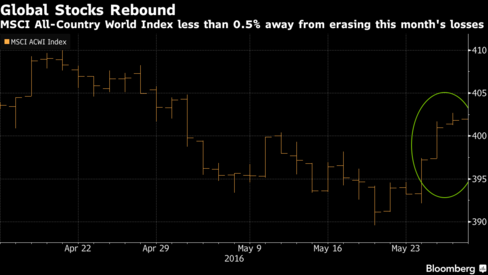 Yellen, speaking at Harvard University, stopped short of giving an explicit hint that the Fed would act next month. Oil slipped after touching $50 a barrel this week for the first time in six months. The dollar strengthened versus almost all major peers on Friday, while Britain’s pound gained for a second week on increasing confidence the U.K. will remain in the European Union. Emerging-market stocks rose for the fifth day out of six, halting the longest slump in weekly declines since August.

The dollar extended an advance as Treasuries fell after Federal Reserve Chair Janet Yellen said an interest-rate increase in the coming months may be appropriate, echoing recent remarks by policy makers. U.S. equities posted their best week since March.

Yellen’s comments come after a string of central bank officials signaled their willingness to tighten policy as soon as next month. Strengthening U.S. economic reports, including data today showing that gross domestic product expanded faster than previously estimated in the first quarter, have supported the argument that the nation can withstand another hike. Traders have boosted the probability of a rate hike in June to 34 percent from 12 percent at the start of the month. July is the first month with more than even odds.

“Yellen had sent out her crew to telegraph this before today. It’s confirmation more than anything — we had all heard from various speakers for a week now that the tone of the FOMC members was not particularly dovish,” said Michael Antonelli, an institutional equity sales trader and managing director at Robert W. Baird & Co. in Milwaukee. “Yellen comes out today and the writing was on the wall and she etched it in with a pen.”

The Stoxx Europe 600 Index rose for a fourth day to the highest level since April 20, while the MSCI Emerging Markets Index climbed 0.5 percent, capping its first weekly gain in six.

Japan’s Topix climbed to a one-month high as local newspapers reported the likely postponement of a sales-tax increase and a drop in consumer prices reinforced expectations the central bank will add to record stimulus.

The currencies of oil-exporting nations pared their weekly advance on Friday as oil retreated. The Canadian dollar, Norwegian krone, Brazil’s real and the ruble weakened at least 0.5 percent.

The pound strengthened 0.7 percent this week versus the dollar, the second-biggest gain among 16 major peers. A poll by former Conservative lawmaker Michael Ashcroft showed almost 65 percent of voters believe the U.K. will remain in the European Union after a June 23 referendum.

Prices climbed above $50 a barrel on Thursday for the first time in more than six months as a decline in U.S. crude stockpiles and production accelerated. The Organization of Petroleum Exporting Countries may stick to its strategy of prioritizing market share over prices when it meets next week.

Gold in the spot market fell 0.8 percent to its lowest level since February, posting an eighth day of declines. The precious metal is heading for the biggest monthly loss since November as investors anticipate higher borrowing costs in the U.S.

As emerging markets rebounded, Russia and Qatar returned to international debt markets for the first time since at least 2013. Russia’s $1.75 billion of bonds due 2026 rose on the first day of trading. Qatar sold $9 billion of bonds in three maturities on Wednesday, almost double the amount expected by analysts.

Global corporate-bond sales are on track for one of the busiest months ever, with non-financial companies set to issue more than $236 billion of debt by month-end, according to data compiled by Bloomberg. Companies including Dell Inc. and Johnson & Johnson have sold bonds.