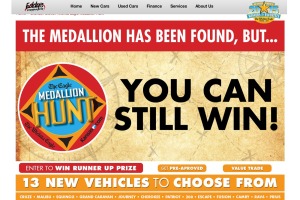 Eddy’s, which comes under the arm of Brandon Steven Motors, will present a ceremonial check to winner Matt Dwyer at Riverfest during the Naughty by Nature concert scheduled on June 8.

WICHITA, Kansas — EddysEverything.com is providing a new vehicle to the winner of the Eagle Medallion Hunt, a game where participants followed clues to search for a plastic coin hidden in Wichita during Riverfest, a local festival.

He can use it to buy one of several vehicles, including a 2016 Chevrolet Cruze, Dodge Journey or Toyota Prius.

Dwyer found the 2-inch diameter coin tapped to a water fountain in a nearby park after following two days of clues posted in The Wichita Eagle newspaper.

The air-conditioning on wife Ashley Dwyer’s vehicle quit, so he expects to use his win to replace her car.

“We will give him plenty of time to research all the vehicles, so he knows which one will be best for his family,” St. John said.

This marks the first time the dealership has given away a car during the 42-year-old Medallion hunt, St. John said, and it’s already helped their business.

“We made it so it was a catalyst to our group website, so we found a lot of people would click over and look at our inventory and we’ve had some of those people from the lead form on our website come in and look at vehicles just off of this initiative,” St. John said.

Edmunds says: A dealership finds the right clue for opening the door to a new car-buying audience.