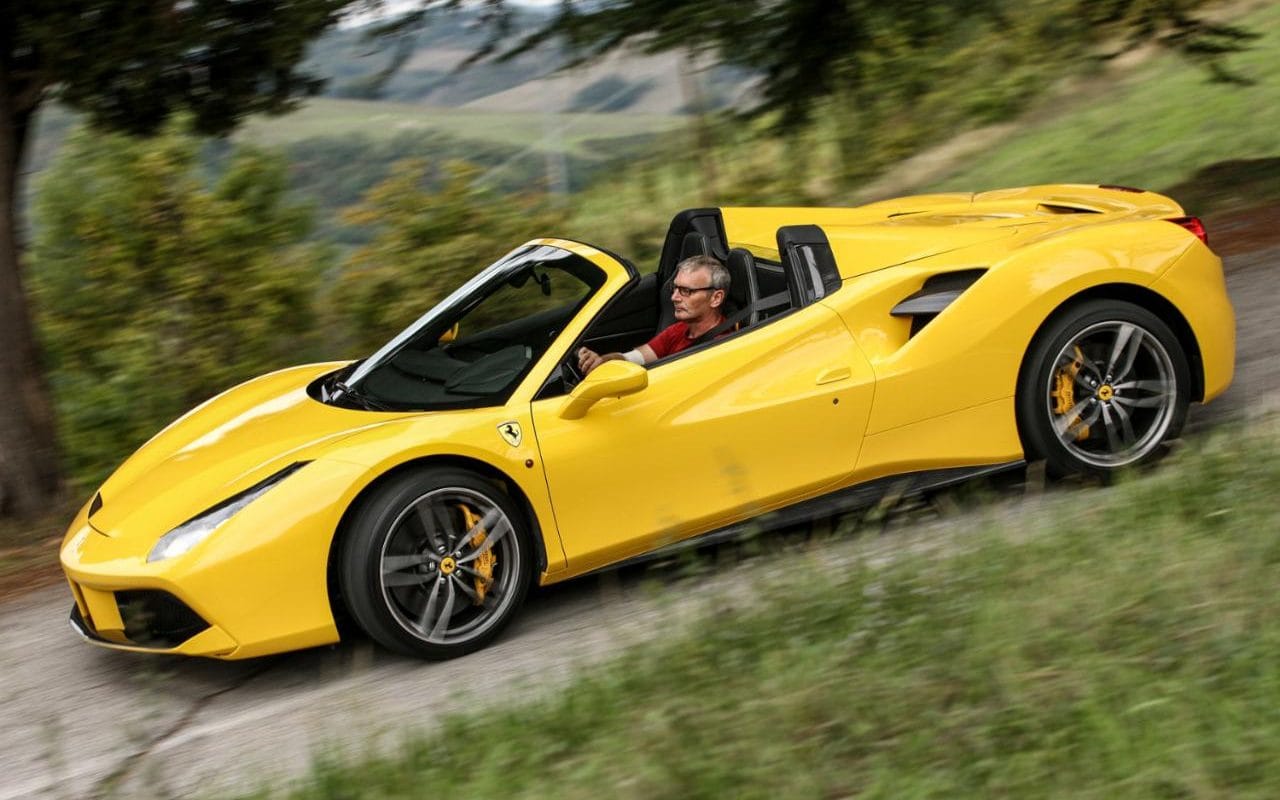 Ferrari’s latest V8 supercar has been criticised for sounding too quiet. Does this convertible version fix the problem?

Given Britain’s love of convertibles, it may come as no surprise that the new Ferrari 488 Spider will account for well over half of all 488 sales in the UK. It’s a similar story in other major markets such as the US and Germany, but it’s Britain that will have the highest proportion of convertibles over coupés.

When assessing the 488 GTB coupé, my esteemed colleague Andrew English reckoned that it was astonishingly fast but that  the new twin-turbocharged engine lacked the aural excitement for which Ferrari V8s are renowned .

So the big question with this car is whether folding away the solid roof improves the treat for the ears. And, if so, is it worth an extra £20,000?

The GTB went on sale last month and Ferrari assures me that no one has yet rejected their car due to the sound it makes. This Spider version, which is mechanically pretty much identical, costs from £204,400 and is available to order now with the first deliveries commencing in June 2016. The 3.9-litre twin-turbocharged V8 is a development of the engine first seen in the  California T (for Turbo), with even more improvements aimed at reducing the delay before the turbos start working at their most efficient and producing extra power.

Turbocharging provides greater power from a given engine capacity along with improved emissions and lower fuel consumption. Turbo engines also sound more muted than their naturally aspirated counterparts, a fact that has caused consternation among Formula One fans and not a few members of the press at the GTB launch earlier this year.

Forgetting the noise issue for one moment, there’s something compelling about a turbocharged engine, even a small-capacity diesel. That extra, free shove comes from a well of torque as more fuel and air is forced into the engine. All well and good, but Ferrari has engineered its to mimic the power delivery of a naturally-aspirated V8, although peak power and torque are achieved at much lower revs than the peaky engine of this car’s predecessor.

And boy is it fast. The way the 488 Spider accelerates provides a visceral thrill of pure performance. As the revs rise the engine’s soundtrack, almost inaudible at idle, builds from a base tone and as the revs reach 3,500 it takes on a harder edge and becomes much louder and menacing. 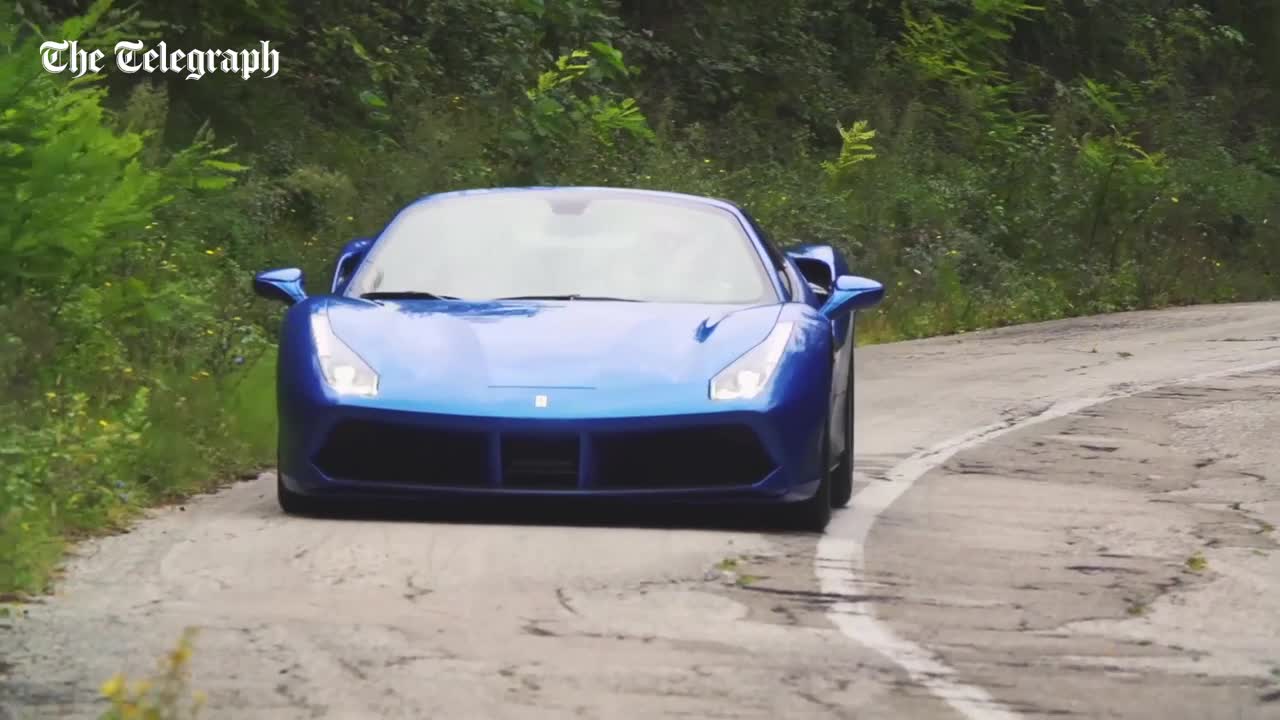 Admittedly,  the high-rev shriek of the previous V8s  has gone, but this isn’t a poor substitute, and once the turbos are really spinning it’s hard work keeping it going by selecting the next of the seven speeds in the seamless, twin-clutch paddle-shift gearbox.

The 488 Spider can arrive at corners at astonishing speed, but the chassis and brakes are more than up to the job.

In conjunction with magnetic dampers, which provided a remarkably smooth ride on some truly awful broken road surfaces, the Spider has the latest version of Ferrari’s side-slip control (SSC), which stiffens or relaxes the dampers to maximise grip. This set-up works in tandem with the car’s electronic brain that also constantly adjusts the stability and traction control systems as well as the electronic differential.

It sounds complicated, and the processing power to achieve it is mighty, but the end result is an amazingly grippy and adjustable car that goes precisely where you point it. Turn the wheel some more and the front end simply tracks and goes round, while there’s incredible stability at the rear as the tyres simply grip rather than try to slide wide and deviate from the chosen line. The 488 Spider’s set-up inspires great confidence, and if you owned one there would be a lot of satisfaction to be had in learning to get the best from it.

The aerodynamics also play a part in the car’s ability to cover ground like few others, being slippery enough for a high top speed yet channelling the air over, around and under the car to achieve downforce without increasing drag.

Then there’s that other bugbear of convertibles, flexing of the body over bumps due to decreased rigidity compared with a metal-roofed car. First, Ferrari’s roof is a hard-top but it doesn’t add much in the way of rigidity, so there’s extra bracing inside the aluminium chassis (partly attributable to the 50kg weight increase over the GTB).

I must confess I haven’t driven the GTB coupé yet (are you listening, Mr Ferrari?) but we drove the 488 Spider on some pretty atrocious roads and there was no question of unruly behaviour.

Just to note, the suspension is also the same as the coupé’s, so there’s no trickery afoot there. Anyhow, Ferrari reckons that 90 per cent of people who buy one of its Spiders buy only a Spider, so as long as each new model is significantly faster and stiffer they are more than likely to be satisfied. 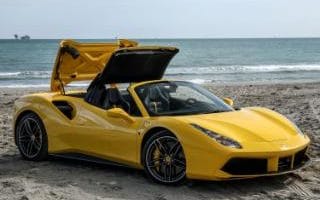 It’s such an accomplished car that I find it a shame that some observers have commented on the noise it makes. True, the engine sound isn’t as compelling as the previous, 458’s, but Ferrari, along with everyone else, has been forced into turbocharging if it is to achieve ever greater power while satisfying emissions regulations.

The 488 Spider has got sufficient V8 bite and bark to satisfy most people, so it really isn’t a deal-breaker. And when such prodigious performance is available, that’s more than adequate compensation.

No, save your tears for when Ferrari’s (and Lamborghini’s) naturally aspirated V12 engines finally succumb to the inevitable.

Like it or not, turbocharging is here to stay at Ferrari, the 488 Spider is a glorious way to usher in a new era of the company’s mid-engined V8 cars.

More than the coupé, the Spider can be anything you want it to be – barnstorming sports car or refined cruiser, and anything in between. If you have the means to buy a £200,000-plus car, the extra over the GTB is money well spent.

Verdict: Thrillingly fast and involving sports car that’s gained an extra dimension in losing the fixed roof of the GTB coupé. That extra versatility comes at a hefty premium, but buyers will find it a price worth paying