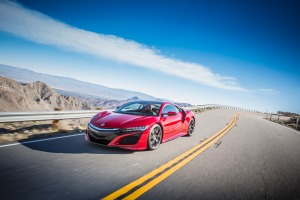 “Today marks the realization of a big dream,” said Clement D’Souza, engineering large project leader for the Acura NSX, in a statement. The first 2017 Acura NSX rolled off the production line in Marysville, Ohio on Tuesday, as the supercar edged closer to car shoppers’ hands.

The car went to auto dealer and NASCAR racing team owner Rick Hendrick. Hendrick won the right to custom order the first production NSX with a winning bid of $1.2 million at the Barrett-Jackson auction in January.

All proceeds from the sale went to the Pediatric Brain Tumor Foundation and Camp Southern Ground.

The hand-crafted NSX is built at the all-new Performance Manufacturing Center, a high-tech facility with an emphasis on world-class craftsmanship.

The car is subject to rigorous quality checks.

Prospective buyers can configure their NSX online and then request a one-on-one consultation with an Acura dealer who is also an authorized NSX retailer.

Edmunds says: The long wait for the NSX is over, as a major milestone is reached with the official kickoff of production.