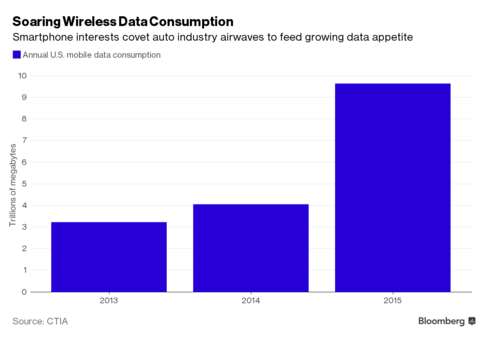 Yet the 2017 Cadillac CTS arrives to skepticism in Washington, where Detroit’s dream of cars talking to cars is running into Silicon Valley’s wireless aspirations. General Motors Co. is rolling out a sedan laden with gadgets that track other cars on the road and can automatically brake to avoid collisions, fulfilling a safety vision decades in the making.

Tech companies want to claim some of the airwaves dedicated to the car-safety systems 17 years ago, long before smartphones and mobile apps sparked a rush for new frequencies. That would mean GM, Toyota Motor Corp. and other automakers could be forced to share the frequencies.

Carmakers say unfettered use of the airwaves is needed to assure safety.

“Our view is that safety delayed is safety denied,” Pender said.

“The auto industry has been very successful in pitching this as being about our great concern for life and safety, while these guys just want you to stream cat videos and Netflix while you’re in your car,” Harold Feld, senior vice president at the policy group Public Knowledge, said in an interview.

The Federal Communications Commission is examining ways to share and expects to finish testing in January. A final decision won’t come until after more consultations with safety regulators at the Transportation Department.

Carmakers say they need all the airwaves the federal government granted them in 1999, but may be able to share some as long as safety isn’t disturbed. They say changes may cause delay.

“We get that spectrum is a finite resource, and there isn’t enough to go around,” said Hilary Cain, director of technology and innovation policy at Toyota in Washington. “At the same time, we are very, very, very committed to vehicle-to-vehicle communication, so we’re concerned about finding the right sharing solution that doesn’t upend our technology at this stage of development.”

Several proposals have evolved to address the dispute. One from Cisco that’s backed by the auto industry calls for sharing the airwaves but prioritizing car-safety communications. Qualcomm Inc. has proposed a rival strategy of restricting basic safety functions to part of the airwaves, and letting cars and smartphones share on an equal footing elsewhere — an approach backed by some tech policy groups.

GM knows the vehicle-to-vehicle technology in the 2017 Cadillacs would work under the Cisco protocol, which doesn’t change the channel configuration, said Harry Lightsey, executive director of global connected customer experience for the Detroit-based automaker. It’s not sure the Qualcomm proposal would work.

“We’re putting hardware into vehicles based on the current channel configuration,” Lightsey said in an interview. “All of that hardware would have to be changed. That’s obviously a concern.”

As wireless use grows, the radio spectrum is being re-jiggered to make room for the deluge of video, texts, talk and machine-to-machine communications. TV broadcasters are surrendering airwaves for use by smartphones, and large telecommunications providers AT&T Inc., Verizon Communications Inc and T-Mobile US Inc. are digging into their treasuries to buy access to more frequencies. Smaller players, too, see opportunities: Globalstar Inc. and Ligado Networks, the former LightSquared, want to let smartphones use frequencies now devoted to satellites, and are in line for a rich payoff if they get permission from the FCC.

Talking-car technology is arriving at this time of ferment. It features vehicle-to-vehicle communications over radio signals with a range of about 300 meters. Uses include warnings about impending collisions at intersections, sharp curves and blind spots. The information stream would, for instance, warn drivers not to change lanes or attempt to pass if there’s an oncoming truck.

The same airwaves can supplement current Wi-Fi frequencies, which are becoming overloaded and sluggish. That makes the talking-car frequencies an object of desire for tech companies, which prosper as web use grows, and for cable companies, which invite subscribers to watch video on tablets and other devices, not just TV sets. No. 1 U.S. cable provider Comcast Corp., for instance, has 14 million Wi-Fi hotspots.

Radio signals can reach through vehicles and around corners, unlike some sensor-based technologies coming out on current models — such as the car being tested by Alphabet Inc.’s Google. That vehicle doesn’t use the airwaves in question, and relies on maps, lasers, radars and cameras.

Three of the FCC’s five commissioners put out statements backing airwaves sharing when the agency announced its testing plan June 1. On Monday, Commissioner Jessica Rosenworcel, a member of the agency’s Democratic majority, wrote that the talking-car airwaves represent “a golden opportunity” for more Wi-Fi.

“We need to test to make sure introducing Wi-Fi in these airwaves will not impact roadway safety — and we need to get this testing underway as soon as possible,” Rosenworcel said in the article on the website of Morning Consult, a media and technology company.

“It is very encouraging that the FCC is moving ahead” with testing, said Michael Calabrese, director of the Wireless Future Project at the Washington-based New America policy group.

Members of the Alliance of Automobile Manufacturers, including Toyota and GM, have told the FCC that carmakers need interference-free access to all the allocated spectrum. Wi-Fi devices could switch to other frequencies within thousandths of a second, and usually cars won’t preclude other users, said Mary Brown, senior director of spectrum and technology policy at Cisco.

“There’s going to be a lot of spectrum available all the time in most places,” Brown said in an interview.

Changes like those sought by Qualcomm would require new testing that would slow deployment, the automakers and Cisco said in meetings with FCC officials.

Not so, according to Dean Brenner, senior vice president for government affairs at Qualcomm. “We don’t see it as causing significant delay,” Brenner said in an interview.