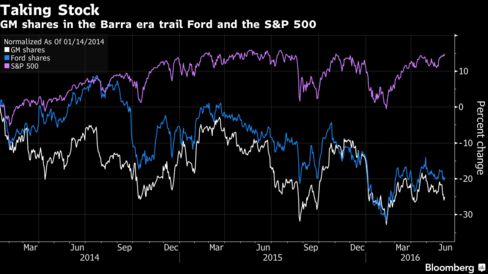 Barra made the case in an interview with Bloomberg Television that GM can handle a downturn and sustain profits if the economy slumps in the next few years. The company also is making investments in ride sharing and self-driving cars to ensure its long-term future.

“I absolutely think, and we think, we’re undervalued right now,” Barra, 54, said ahead of GM’s annual meeting Tuesday in Detroit. “We’re going to continue to work to keep making sure people understand exactly the mission of General Motors and what we’re working toward. I believe that as we continue to do that, that’s something that will take care of itself.”

Getting the stock price going is proving to be one of Barra’s most difficult challenges. Despite record profits, the shares have lingered below the $33 price from GM’s initial public offering in November 2010. GM rose 0.7 percent to $30.21 at 10:30 a.m. in New York.

She will have a tough time getting the stock up, said David Whiston, an analyst with Morningstar Inc. in Chicago. Many investors believe that the auto market has peaked and want to see how GM weathers a downturn before going back into the stock.

“This is the biggest issue for investors,” Whiston said in a phone interview. “A lot of people think it’s peak auto and there’s no reason to own auto stocks right now. We may need a recession for people to realize GM is different than the old GM.”

GM can still break even in a U.S. market that sells 10 million to 11 million vehicles, Barra said. Last year, automakers sold a record 17.47 million. Barra’s claim counters an estimate by Morgan Stanley analyst Adam Jonas, who said in a February report that GM and Ford Motor Co. need U.S. consumers to buy 13 million to 14 million vehicles to break even.

About 25 percent of GM’s workforce is made up of short-term workers who are “truly variable,” Chief Financial Officer Chuck Stevens said in an interview. GM would be able to cut work shifts quickly to slash costs if sales slowed, he said.

In May, GM’s U.S. sales plunged 18 percent, as the automaker shunned low-margin fleet deals with rental-car companies. For the second time this year, the company’s monthly market share dipped below 16 percent, according to researcher Autodata Corp.

GM has been careful not to overbuild now, when sales are strong, so the company won’t have a glut of cars in inventory when the market slows down, Barra said. That would limit the need for big production cuts. The company is reducing about $5.5 billion in costs by 2018, she said.

As for the long-term threat to GM from the likes of Uber and Google, sales could fall if more consumers want to pay for cars as they use them, said Mark Reuss, GM’s executive vice president of global product development.

To counter this, GM has invested in Uber rival Lyft Inc. and bought Cruise Automation, an autonomous-drive technology company. The Cruise deal closed in May and GM already has Cruise’s autonomous software in the Chevrolet Bolt electric car, Reuss said.

Once GM has fully autonomous cars, its investment in Lyft can become compelling, President Dan Ammann said. Consumers hailing driverless Lyft cars would create a revenue stream with dwellers in congested cities who might not buy cars.

Reuss said GM could still work with Google, which has tested self-driving cars over 1.4 million miles and is a shareholder in Uber. While Fiat Chrysler Automobiles NV plans to provide self-driving minivan prototypes that will be used by Google to test its self-driving technology, the tech giant hasn’t ruled out more partners. “We’re absolutely open and willing to do that,” Reuss said of working with Google.

Other opportunities for growth include the GM Financial lending business, Stevens said. The lending arm finances about 30 percent of the automaker’s retail sales. That should grow to as much as 55 percent in the next few years, he said.

Ammann points to Cadillac. The global luxury business is 10 percent of sales and 30 percent of profits. Cadillac has a small piece of that. The luxury marque is growing in China but receding in the U.S. GM plans to spend $12 billion to develop eight new Cadillac models by 2020 and two more in the next decade.

“Our journey with Cadillac is going to be a multi-multi-year journey, and we’re completely committed,” Ammann said. “Too early to declare victory, at this stage.”

The same could be said for those selling GM stock.