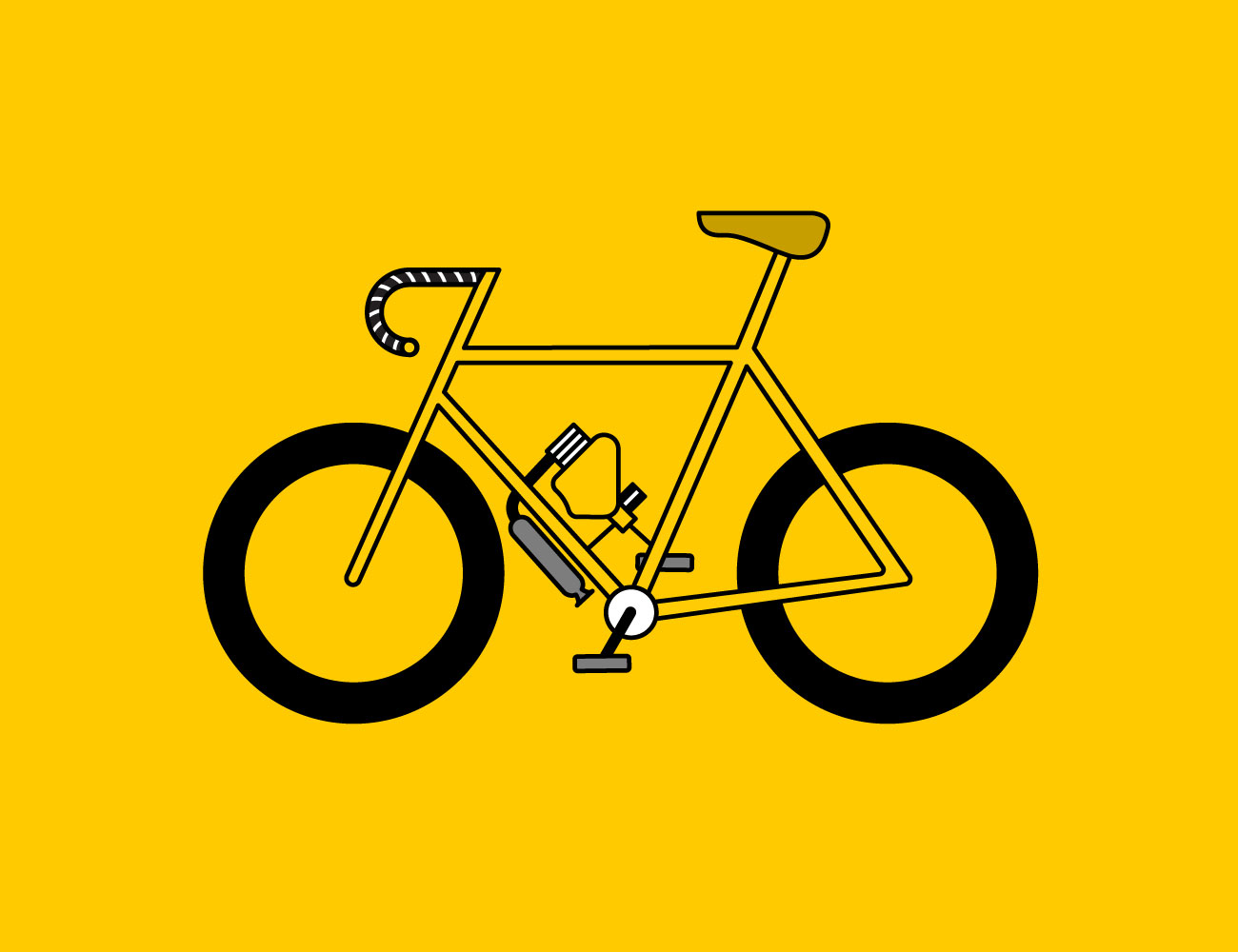 Guide : Your Bicycle Can Turn To Be A Motorcycle

Here are the guide for you.

Today we have 300+ horsepower, $53,000 road rockets that far surpass what the first motorcycle builders dreamed of. But there’s a much more affordable way to go faster than your body was meant to, and it follows in the spirit of those two-wheel pioneers. Make your commute shorter, quicker, explore more by traveling farther faster — build you own motorcycle for less than $600.

You could source every part individually, from either junkyards or the internet, but that’s a more complicated process than is necessary. You could also go for production e-bikes, but the price point on a worthwhile model isn’t far off from a small motorcycle. The better option is to go for a complete bicycle engine kit. We’ll walk you through some of the best kits we’ve found to make sure you don’t build the motorcycle you need — but rather, the one you deserve. 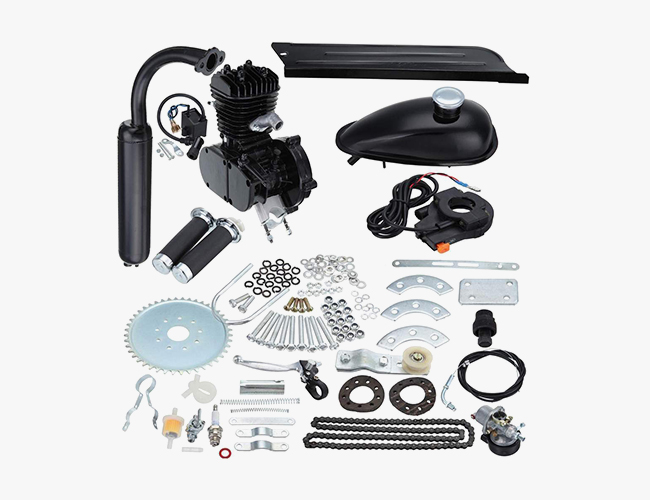 The mid-mounted two-stroke is by far the lightest and most compact solution here, but as with all two-stroke engines, maintenance is a little more involved. Namely, getting the fuel-oil ratio right is key, both for engine life and performance. This kit mounts lower on the bike frame, which in turn keeps the center of gravity low and gives the bike a more natural feel, similar to a full-fledged motorcycle. 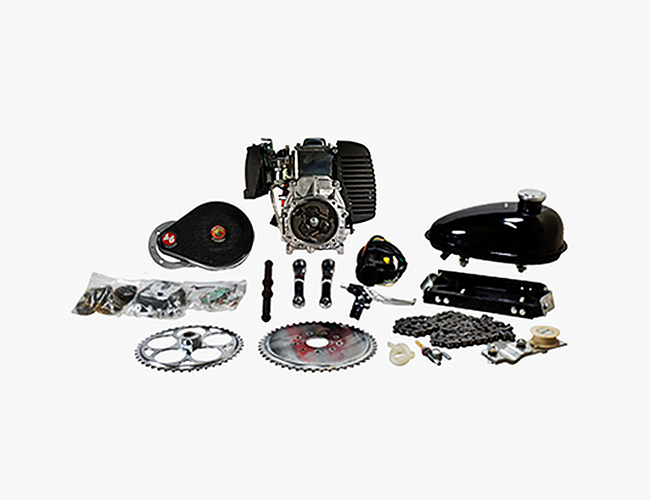 The mid-mounted four-stroke option is larger and heavier than the two-stroke kit above, but it runs cleaner and smoother. You don’t have to worry about fuel-oil ratios, but due to the width of the engine, you may have to put extenders on your crank set so the pedals can be free to spin. The particular four-stroke engine yields 150 mpg and a top speed nearing 35 mph. Mounting this engine in the center of the frame keeps the weight down and doesn’t spoil the handling as much, meaning it’s safer at the higher speeds. 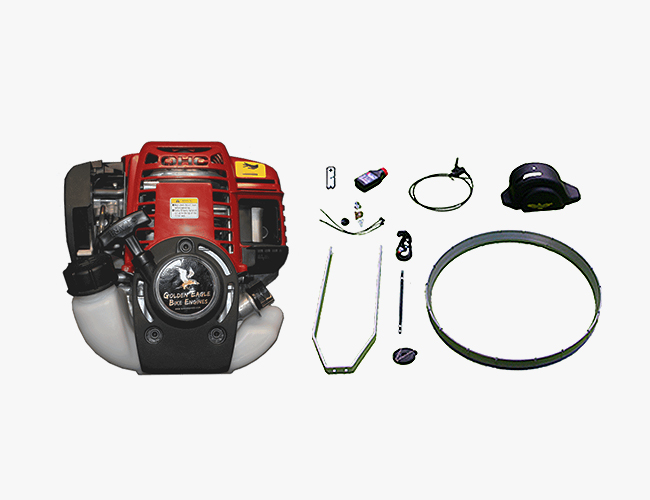 The Golden Eagle rear-mounted engine keeps everything compact and out of the way by making the gas tank and the engine the same unit. The number of parts is minimal, and the engine mounts above the rear wheel, keeping the entire setup out of the way so as not to obstruct casual riding. This will drastically change the center of gravity in your bike by raising it higher, but it wouldn’t feel any different than if you were carrying a large package on a rear rack. 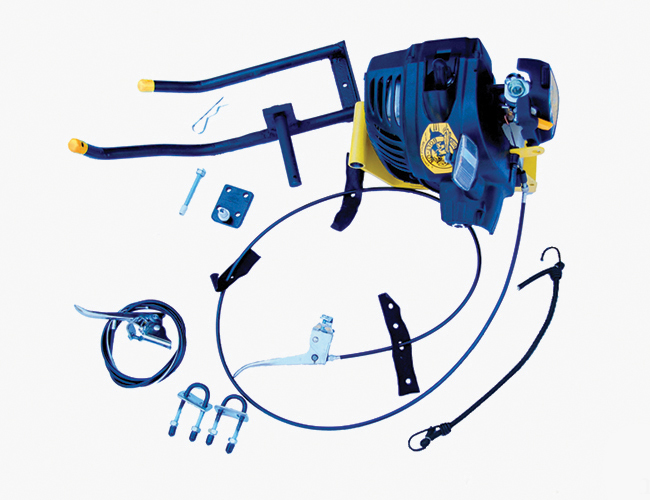 The front-wheel-drive system offered by Bumble Bee Bolt-On may change your bike’s steering feel slightly by adding weight over the front tire, but it is by far the simplest system. Since it slides on over the top of the wheel, and doesn’t use a chain or belt drive, it can fit on almost any size wheel. The drive system uses a drum that presses against the tire, using friction to spin the wheel. The lack of a chain means a simpler system overall with fewer moving parts, which means less maintenance. Since this bolt-on drives the front wheel, adding pedal power essentially creates a hybrid all-wheel-drive system. 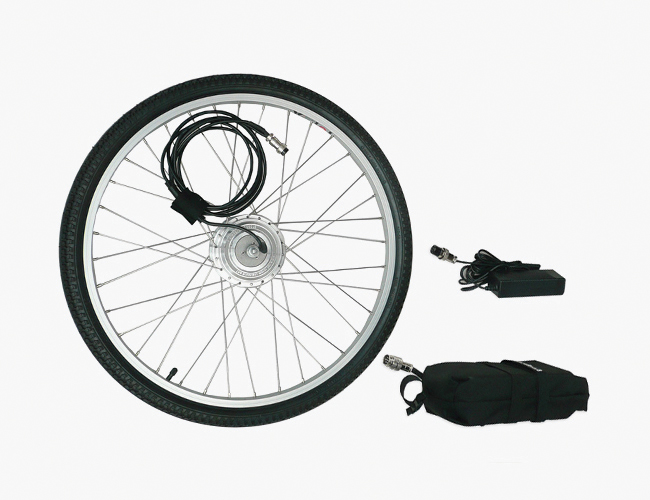 Instead of buying an entire e-bike, simply replace the front wheel with Hill Topper’s Wheel Hub. It’s the most compact and most eco-friendly system on this list and is by far the easiest system to install, but it’s also the least powerful. One major advantage the electrical system has over its gas-powered rivals is that where engines have a predetermined mounting point, the battery pack can be placed anywhere you see fit.