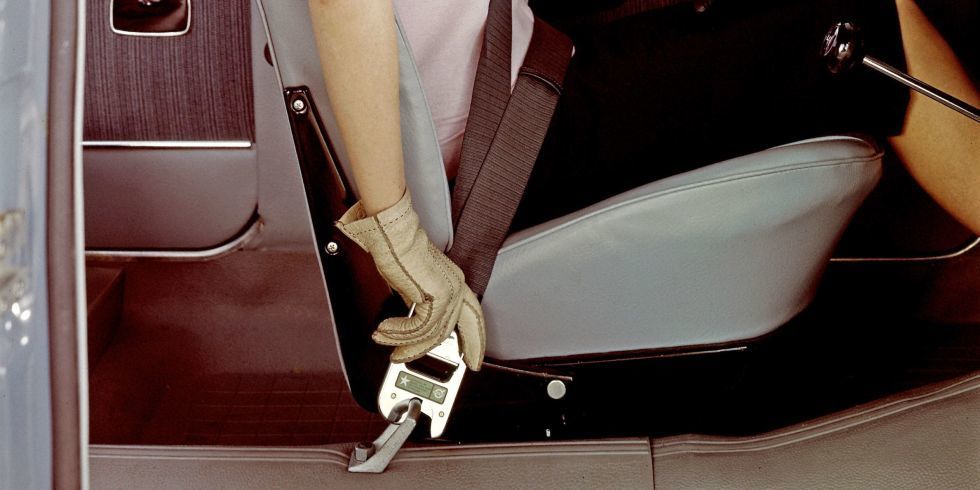 At Saab, Bohlin had concentrated his effort on ejecting pilots, getting them out of danger, moving them as quickly as possible. At Volvo, he would be doing exactly the opposite: keeping drivers in place. Nils Bohlin was an engineer at Saab, designing airplane catapults for pilots, when Volvo hired him to work on cars. By the 1950s, Volvo had already figured out laminated windshields, padded dashboards, and even standard lap belts in a time when there were hardly any regulations mandating its use.

The humble lap belt had plenty of problems. Positioned right underneath the ribcage, in a crash the lap belt would concentrate the forces of impact right on a person’s vital organs. In crashes people tended to snap forward, their upper bodies flying into windshields as they folded like hinges right around the belt.

Two Americans laid the groundwork for Bohlin, Volvo, and the three-point belt: Roger Griswold and Hugh DeHaven filed for a patent on June 14, 1955 for what they called the CIR-Griswold restraint. This seatbelt featured both a diagonal and a pair of lap belts, yes, but all three belts met in the middle. DeHaven was a World War I fighter pilot who wondered why he had been the only one to survive a mid-air collision with another plane, and went on to direct a crash injury research project at the Cornell Medical School. “People knew more about protecting eggs in transit than they did about protecting human heads,” he once wrote.

DeHaven’s research became widely analyzed by American policymakers during the 1950s, but his invention did not. Bohlin’s design refined upon this earlier idea, keeping the chest and shoulders in place, the two belts forming a V, equally distributing restraint forces against both the chest and hips. The buckle was moved to the low point on the side of the seat, eliminating the use for a separate belt and removing the cumbersome buckle from the wearer’s waist. “Bohlin’s belt was in fact an effective demonstration of geometrical perfection,” says Volvo, perhaps in a nod to the earlier patent, “rather than a cutting-edge innovation.”

The idea seems simple now. But it took Bohlin over a year to prototype and test the V-shaped, three-point seatbelt system. He filed for a patent in Sweden on August 29, 1958, and in America almost exactly a year later. 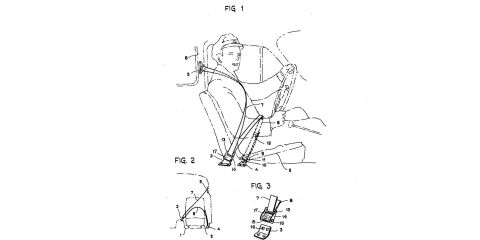 And on July 10, 1962, US Patent Office granted Nils Ivar Bohlin, of Gothenburg, Sweden, Patent No. 3,043,625 for the safety belt. In the patent document, Bohlin explained, in the wordy verbosity of patent language: “the strength of the seat and its connection with the vehicle in an effective and physiologically favorable manner retains the upper as well as the lower part of the body of the strapped person against the action of substantially forwardly directed forces and which is easy to fasten and unfasten and even in other respects satisfies rigid requirements.”

Volvo made three-point belts standard in the Amazon, during that car’s second year of production. A mere four years later, the The National Traffic and Motor Vehicle Safety Act made three-point front belts mandatory.

Since then, it hasn’t changed much. It hasn’t had to. Sure, there was that brief little dalliance with automatic seat belts, went the way of the dodo and the pop-up headlight, and there was that cool new trend of talking dashboards (“please fasten your seat belts!”) that could possibly scare the ever-loving heck out of God-fearing Chrysler drivers, but that’s about it, really: it was still three points, a buckle, and an inertia reel.

Perhaps to reinforce the point: a three-point safety belt and seat from a 1961 Volvo PV 544 resides at the Smithsonian. 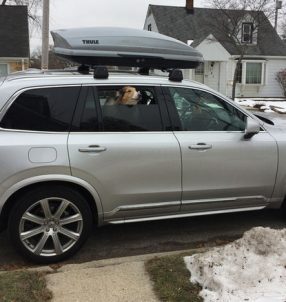