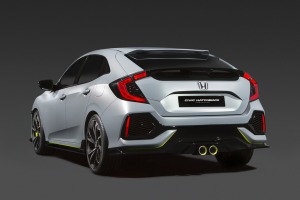 Both are slated to arrive at dealerships later this year, as car shoppers warm up to the resurgence of a type of vehicle that provides some of the utility and functionality found in a crossover SUV at a price that is thousands less.

SANTA MONICA, California — The hatchback segment is heating up with such entries as the 2017 Honda Civic Hatchback and 2017 Chevrolet Cruze Hatchback.

In an analysis conducted by Edmunds.com, the number of hatchback models has more than doubled in the past 10 years.

However, hatchbacks accounted for just 4.1 percent of U.S. retail sales in the first quarter of this year compared with 39.0 percent for crossover and SUV sales combined.

Today, nearly every automaker offers a five-door hatchback, although the biggest market is in the compact and subcompact segments.

Automakers apparently are giving buyers what they want.

“There is definitely some evidence that supports manufacturers’ lofty expectations for the hatchback segment,” said Jeremy Acevedo, senior analyst, strategic analytics, at Edmunds.com. “The hatchback take-rate for models that also had a sedan offering was 34.4 percent in the first quarter of 2016, the highest it has been since 2012.”

An example is Focus, which offers both sedan and hatchback models.

While vehicle functionality and flexibility are important considerations in making the decision to buy a hatchback, the key is sticker price.

“Hatchback buyers try to balance everything they are looking at: fuel economy, size, utility, of course price. The smaller these vehicles get, the more affordable they become,” Acevedo said.

“You cut a lot of cost by having these global platforms in place,” he said. “You tweak a few things here and there and make them U.S market ready.”