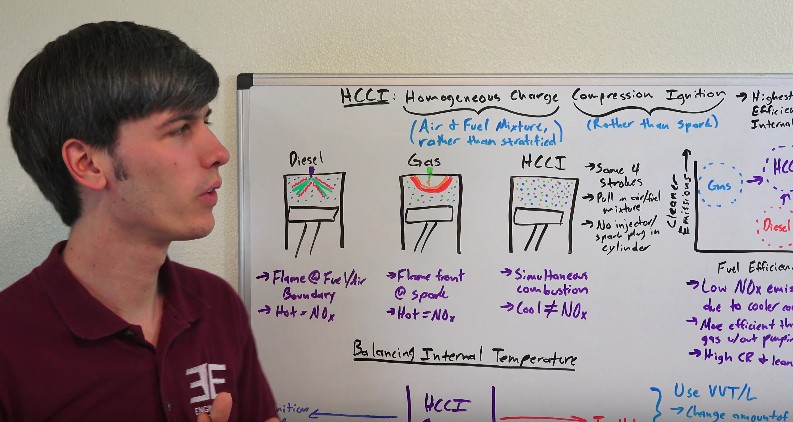 HCCI Engines, Might be the Internal Combustion Engine’s Future

The internal-combustion engine is  for a gasoline engine;  in a diesel engine, fuel is compressed until it explodes, after it’s sprayed in as air and pulled in by the piston.

There’s a third type of engine on the horizon though and it’s called a Homogenous Charge Compression Ignition engine, or HCCI for short.

HCCI engines, in theory, have the same four strokes, but there’s simultaneous combustion of air and fuel and it’s spread through a homogenous mixture of the two. Both air and fuel are evenly pulled into the cylinder, and it’s all ignited by way of compression instead of through a spark, just like in a diesel engine.

This leads to lower combustion temperatures, which, in turn gives improved emissions and a more efficient engine. Think of it as the best of both worlds of both gas and diesel: it can generate horsepower, gain higher fuel efficiency, and give off cleaner emissions.

It’s not a clear and easy win though, because there’s a challenge with an HCCI engine. It revolves around the balance of internal temperature. If it’s too cold, it affects the performance of the ignition system. If it’s too hot, engine knock can arise.

Hit play and let Jason from Engineering Explained do what he does, without the steel forehead we’d need to do the same.

Video explained what is an air suspension