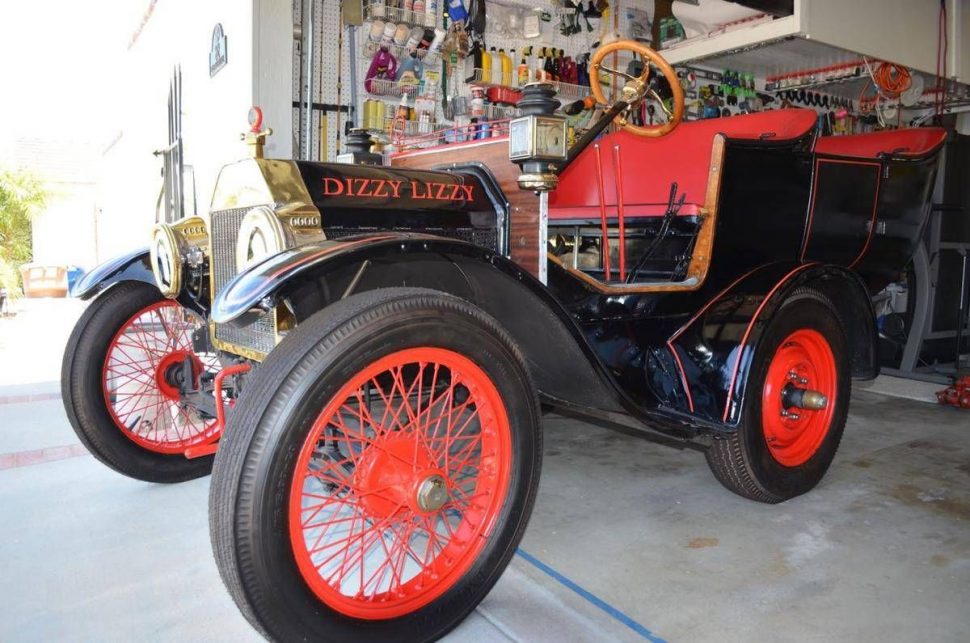 eems like Ol’ Walt himself was a stickler for authenticity, too – this “Dizzy Lizzy” doesn’t seem to differ substantially from actual stunt parade cars we’ve seen.

Though this 1908 Ford Model T for sale on Hemmings.com may not have been an original stunt parade car from the first half of the 20th Century, it has its own unique history – specifically as a stunt parade car for Disneyland’s daily Main Street parades in the early 1960s. S From the seller’s description:

This Model T was owned by the current owner’s grandfather, William Ollie Hutton, and was created for Walt Disney to be displayed/run in the Main Street Parade in the early 1960’s when Disneyland had just opened to the public a few years earlier. The vehicle was known to the public as the “Dizzy Lizzy” as it was modified to do wheelies (putting the front end in the air) while doing 360’s while in the air. IThe vehicle was designed by Bob Gurr. A Senior Mechanical Design Engineer in the early days of Disney in the 1960’s.

What we do know is that during the early 1960’s this vehicle was driven in the daily Main Street Parade at Disneyland, was featured in the early 1960’s annual Hollywood Santa Clause Lane Parade, was guest star’s “Pa Oats” vehicle in the 1969 – 1979 T.V. series Hee Haw staring Buck Owens and Roy Clark, and was featured on ESPN Classic NFL Films with Steve Sabo during the 1964 season when the Baltimore Colts were playing the Los Angeles Rams at the L.A. Coliseum. (The owners have a short video clip from ESPN Classic that was aired nationally showing the history of “NFL Films” narrated by Steve Sabo.) It shows Ollie Hutton in the Disney Goofy costume driving Dizzy Lizzy with Coach Don Shula sitting in the front passenger side with quarterback Johnny Unitas in uniform with another unidentified player #10 sitting in the back seat.

The owner’s have a few 16mm film clips showing Ollie Hutton as Goofy, the Dizzy Lizzy, along with Disney Characters Riding in the Disneyland Main Street Parade, driving in the back lots of Disneyland, and the video clip from NFL Films. We also have a Disney thank you plaque from 1964 from Walt Disney for Ollie Hutton’s contribution with the Dizzy Lizzy in the 10th annual Disney Holiday Parade among other trophies.

The vehicle was restored to itstag heuer replica watches current condition by a collector in Coeur d’Alene, Idaho and was driven in parades.