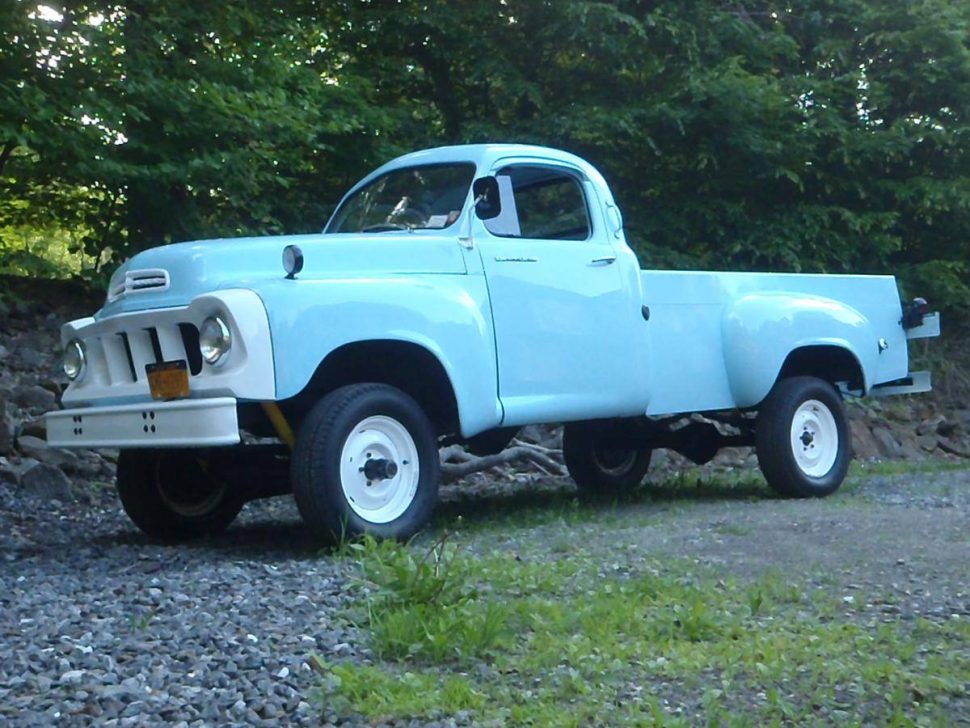 Like the four-wheel drive offerings from GMC and Chevrolet, NAPCO (the Northwestern Auto Parts Company) handled the conversion, ensuring that production line changes for Studebaker were minimal. Just over 350 four-wheel drive examples were built in total before Studebaker ended truck production entirely in early 1964, and it isn’t clear how many survive today. This 1958 Studebaker 3E6D 4×4 pickup, for sale on Hemmings.com, has been restored for its current owner, and was only put back on the road in 2015. A 1959 Studebaker engine of the same displacement was substituted for the original, and rear brakes have been updated to those from a 1964 model. Rear gearing has been changed to a more road-friendly 4.09:1 (from the original 4.88:1), and new front lock-out hubs reportedly improve drivability as well. As a weekend hauler or promotional tool for a small business, it’s a safe bet this Studebaker will draw attention wherever it goes.

When it comes to Eisenhower-era pickup trucks equipped with four-wheel drive, Studebaker probably isn’t a brand that pops into most people’s minds. From the seller’s description:

This truck has been fully restored. Nothing has been untouched. The engine is from a 1959 truck and is the same as would have been in the truck from the factory, It is fully rebuilt using the standards Studebaker would have used for a Heavy duty engine which includes hardened valve seats. Has a large radiator and five blade fan. New items include the carburator, water pump and hoses, exhaust, clutch and pressure plate, and all internal parts except crankshaft and rods. New heater core. The transmission is a T98 fully syncronized. The transfer case has all new bearings and seals, The gears look very nice. Two new drive shafts. the front axle has been fully reconditioned to new. The constant velocity joints have been reconstructed and are tight as they should be. Brakes on both front and rear axles are new. The rear brakes have been converted to 1964 Studebaker truck brakes, It stops very nicely. Both front and rear axles have been converted from 4:88-1 ratio which is very slow to 4:09-1 which gives this truck nice road speeds. The front axle has New lock out hubs which gives the truck the feel of two wheel drive. It drives straight and smooth.

The gages and wireing are new, as is the fuel tank sender, brake lines and hoses. The floor is carpet and the seats are of a long wearing foe leather. It is equiped with arm rest, dual sun visor, courtesy light and self canceling signal lights. All the body work has been professionally done.